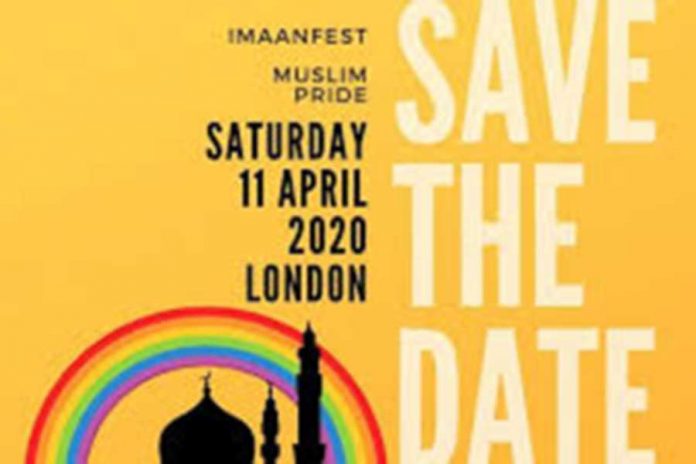 London will host what is being billed as the “world’s first” and transgender Muslim pride event this spring.

A crowd-funding campaign raised nearly $20,000 to hold “Imaanfest: Muslim Pride” on April 11 to celebrate gay and transgender members of the Muslim community.

The event will be held indoors and feature speakers, films, and an exhibition of Muslim gay and transgender history.

“The media has tried to control the narrative about Queer Islamic identities for too long, often thrusting us into a horrific culture war, as if Islam is the mortal enemy of queer identity,” said Amrou Al-Kadhi, a Muslim-British filmmaker who will speak at the event.

Imaan is a charity that has operated for 20 years and describes itself as “the U.K.’s leading LGBTQ Muslim charity.”

“We have had to fight Islamophobia, homophobia, transphobia and racism to get our voices heard, and being part of this celebration is an opportunity to share the message that we are here, we are queer and some of us don’t drink beer!” said Muslim transgender activist Asifa Lahore, who will also speak at the event.

There are more than 3 million Muslims in England, including London Mayor Sadiq Khan. Khan has supported similar events in the past, including kicking off 2019’s gay pride parade while blasting Prime Minister Boris Johnson for his comments on gay and transgender issues.

Israel’s Supreme Court ruled against a surrogacy law Feb. 27 that critics said discriminated against same-sex couples and which sparked uproar in the LGBT community when it was passed.

In a statement, the court said the 2018 law, which expanded access to surrogacy in Israel to single women but excluded gay couples, “disproportionately harmed the right to equality and the right to parenthood” for same-sex couples and that it was unlawful. It gave the state a year to change the law.

Israeli same-sex couples looking to become parents are often deterred by the additional costs that come with finding a surrogate in another country, costs they could save if they were allowed to use a surrogate in Israel.

“This is a historic decision for Israel, for the gay community and for thousands of Israeli couples who will fulfill their basic right to become parents,” said Hila Peer, head of The Aguda-The Association for LGBTQ Equality in Israel.

The state had argued that the law was intended to protect surrogate mothers, but the court ruled that it would be possible to strike a balance that would not discriminate.

The law’s passage prompted tens of thousands of LGBT members and their families to protest, with many leaving work to demonstrate on the streets of Tel Aviv, Israel’s liberal bastion, and elsewhere.

The protest generated widespread support and hundreds of employers said they would allow employees to observe the strike without penalty.

Israel has emerged as one of the world’s most gay-friendly travel destinations in recent years.

Gays serve openly in Israel’s military and parliament, and many popular artists, entertainers as well as the country’s current justice minister are openly gay.

However, leaders of the gay community say Israel still has far to go in promoting equality. Many saw the 2018 law as a betrayal by Israeli Prime Minister Netanyahu who said he would support an amendment that would include gay couples but then reneged under pressure from his ultra-Orthodox coalition partners.