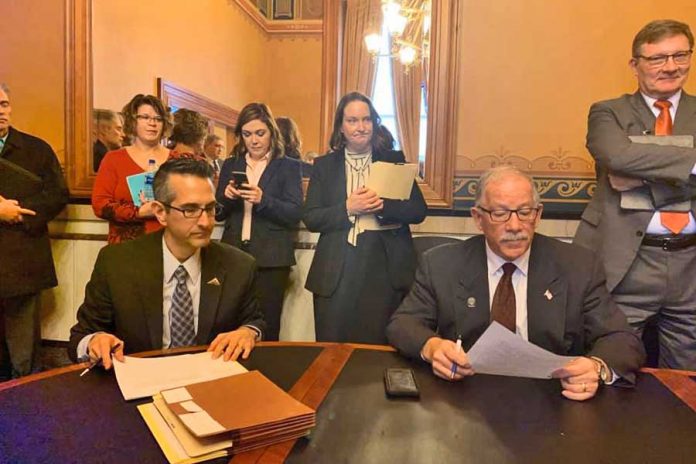 When I was in elementary school, I was taught that the Mayflower landed at Cape Cod and that’s how the pilgrims (aka the puritans) arrived in America. After this lesson I did not become, nor was I tempted to become 1.) A pilgrim, 2.) A deckhand, 3.) A cod.

That is the logic behind a bill introduced by 13 Republican House members in Iowa that would make schools “notify parents when curriculum or classroom activities include content that relates to sexual orientation or gender identity,” according to the Des Moines Register.

“Not all students, parents or families agree with the viewpoint held by many schools regarding sexual orientation or gender identity issues,” Rep. Sandy Salmon, one of the bill’s sponsors, told the Register. “And they should be allowed to opt out of instruction that contains that.”

Iowa already has a law allowing parents to opt their children out of instruction about the birds and the bees. Because knowledge is power and for some truly stupid reason we have decided that most of this nation’s kids should be completely powerless when it comes to sexual health and development. It’s going GREAT.

But opting out of one specific lesson is a lot different than opting out of every lesson that contains references to sexuality or gender identity. As people have already pointed out, does this mean that a teacher would have to notify parents if they want to name the candidates running for the Democratic presidential nomination because one of those candidates happens to be Pete Buttigieg, a gay? He also won the Iowa Caucus, but, hey, no need to mention him to Iowa’s students.

According to Salmon, talking about Buttigieg is no big deal, but mentioning that he’s gay is an issue for her.

This is, of course, not the first or the only piece of legislation that seeks to shut LGBTQ people and history out of public schools. And it’s fitting that there’s pretty much 100 percent overlap with the people who demand that if sex ed is taught at all, it must be abstinence only. Because everyone knows that if you teach kids about sex then they’re going to go out and have sex. Better to just ignore it all and trust that they will just wait until they’re married. So if you teach kids about gays?

Which is, spoiler alert, not how it works.

“[This makes] Iowa a front-runner in anti-LGBTQ legislation at 13 bills this session alone,” One Iowa said in a statement.

“We have to fight this discriminatory agenda to the very end,” the statement continued. “Instead of ensuring Iowans have accessible health care, world class educational opportunities and high-quality jobs, legislators are stripping protections from marginalized communities. LGBTQ communities and allies have to stand together and let our legislators know that we will not tolerate extreme and divisive legislation.”

Mind you, there very well might be some House Republicans who oppose these bills, but the fact is the extreme right has taken over this party. If you’re a House Republican in Iowa, then you’re guilty by association.

The Des Moines Register quoted a Baptist preacher who supports the measure who said that “there is something very definitely wrong” with LGBTQ people. But don’t worry. He says he “has no hatred” in his heart and that his beliefs are “sincere.”

“A parent who is responsible for a child,” he said, “ has every right to know exactly what the public school, which they are paying for with their tax dollars, is teaching their kids.”

But nobody is arguing that parents don’t or shouldn’t have that right. Nor is there any huge underground network holding secret LGBTQ teach-ins.

Rep. Art Staed, D-Cedar Rapids, told the Register that he opposes the bill and called the idea that there isn’t parent input in what children learn “ridiculous.”

“I just retired from teaching two years ago. I can tell you, parent input is always part of the process of everything that we do,” he said.

And that, my friends, is why we need more teachers, and more Democrats for that matter, holding office.