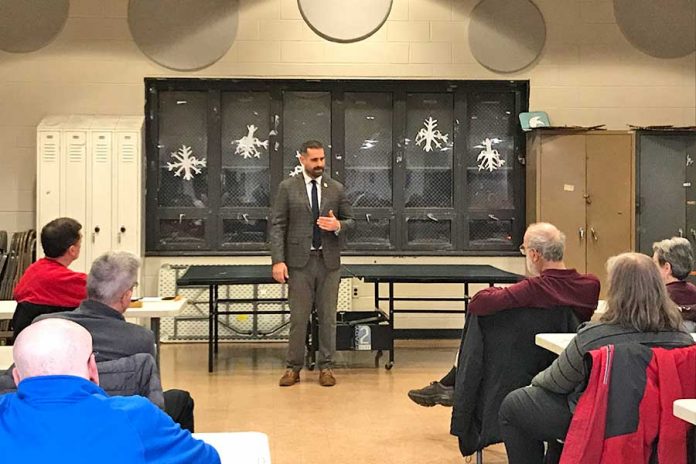 Pennsylvania Rep. Brian Sims held a town hall meeting on Sept. 24 at the Palumbo Recreation Center in Queen Village. In front of a crowd of roughly 20 people, Sims discussed some of the major bills he introduced as well as the issues he deems most important as state representative, such as women’s rights, LGBTQ+ rights and immigrants’ rights.

Sims also acknowledged that Pennsylvania is one of the most gerrymandered states, which comes into play in almost all legislative issues. The current law in Pennsylvania dictates that legislators can take it upon themselves to redraw voting districts, which occurs in tandem with the U.S. Census. In 2018, the Pennsylvania Supreme Court rendered the state’s map null and void, citing illegal partisan gerrymandering. A corrective map was adopted that year.

During the Q&A portion of the town hall, Sims told the audience that he is lobbying to fight gerrymandering in Pennsylvania.

Pennsylvania House Bills, HB 22 and HB 23, cosponsored by Sims, are “designed to create one independent citizens commission in time for the next round of redistricting following the 2020 U.S. Census,” according to Fair Districts PA.

“If we pass gerrymandering legislation, Pennsylvania’s legislature will flip,” Sims told the audience.

The representative briefly discussed LGBTQ civil rights, referencing the lack of legislation in Pennsylvania protecting LGBTQ people from discrimination on the basis of sexual orientation and gender identity.

State legislators and LGBTQ activists have been fighting for years to enact uniform state legislation protecting the queer community from discrimination.  House Bill 1404 and Senate Bill 614, collectively known as the Fairness Act, would expand Pennsylvania’s 1955 nondiscrimination law to include sexual orientation, gender identity and gender expression. While over 50 state municipalities have enacted ordinances protecting LGBTQ folks from discrimination, Pennsylvania is the only northeastern U.S. state without such a law.

“The moment I step outside this city’s district, I no longer have civil rights,” Sims told the audience.

Sims also mentioned that he was one of the drafters of the Pennsylvania Marriage Equality Act.

“We’ve never enacted it into legislation, which means that when somebody like me wants to get divorced, it’s more burdensome,” Sims told the audience.

Equal pay, comprehensive sex education, protecting minors from conversion therapy and freeing schools of asbestos and lead are also among other of Sims’s main priorities, which he detailed in the meeting. One of the bills he is currently working on is titled Sex Education and Affirmative Sexual Consent. He told the audience that he believes that sex education in Pennsylvania is predominantly geared toward white, straight, cisgender people.

“As the Me Too movement became more and more prevalent, it became more obvious to me about why we need to teach comprehensive sex ed across the state,” Sims told the audience.

“One of the ways we know we can fix this, empirically, mathematically, is to educate young people to understand things about affirmative consent, healthy relationships, understanding what addiction can look like and how that can impact that relationship,” he continued.

Sims hopes to fight for a $15 minimum wage in the coming months, he told Philadelphia residents.

When it was time for the audience to raise questions, one person expressed concerns that a $15 minimum wage would present an obstacle to young people getting jobs due to some local businesses already having closed their doors. When the resident asked what would be done to help young people find jobs, Sims said he believes that improving education is the key to keeping youth engaged after school.

Sims indicated that he was hopeful that the Pennsylvania General Assembly would see more Democratic representation.

“The two top Republicans in both the House and the Senate announced they are not coming back,” he told the audience. “I think that’s a sign that they know that there are a million more Democrats in the state of Pennsylvania.”