Human rights advocates and others are mourning the death of a Haiti gay rights activist who was found dead inside his home in Port-au-Prince under suspicious circumstances.

Charlot Jeudy was found dead on Nov. 25 inside his home in the Caradeux neighborhood of Haiti’s capital. Jeudy, 34, was the leader of the prominent Haitian LGBT advocacy group Kouraj, or Courage.

Jeudy’s brother, who asked not to be identified for fear of repercussions, said he and Jeudy were together around 5 p.m. Nov. 24. After they parted, Jeudy received a phone call and went to meet someone near the Champ de Mars, the brother said. On Nov. 25, a nephew called him and said Jeudy was still in bed and would not wake up.

“I shook him, turned him around, nothing,” the brother said.

The brother said the family wants the police to take the death seriously and to carry out an investigation. They are also seeking an autopsy. “I always told him to be careful because Haiti is not like other countries,” the brother said.

A friend, who asked to be identified only as Boumba, said while Jeudy was working on a number of projects to protect LGBT rights, he did not want to speculate on the cause of his death. He said friends and family members were meeting with lawyers and human rights activists on Nov. 26 to push for a “serious investigation” into the cause of death.

Jeudy first rose to international prominence in 2016 when the Fondation Connaissance et Liberte (FOKAL) and Institut Francais were both forced to cancel a film screening and discussion as part of an LGBT film festival put on by Kouraj after receiving threats of violence and homophobic messages on social media.

Earlier this year, as gay pride flags started popping up around Haiti’s capital, Jeudy was proud but concerned for his safety. During the Port-au-Prince International Jazz Festival, he and Kouraj were chosen by British R&B singer Joss Stone, who asked festival organizers to team her with a local charity during her visit to Haiti because she wanted a way to give back.

LGBT activists in China are seeking to legalize same-sex marriage through a novel tactic: submitting opinions on a draft for the new civil code to the country’s legislature.

It’s one of the few options available as space for civil society and advocacy has shrunk. Human rights activists and their lawyers have been detained, and internet censorship has grown.

Activists acknowledge that marriage equality is still far off, but say the opinions will push the government to take the demand more seriously.

The Church of Sweden has accepted and put on display an image of LGBTQ followers of God living together in heaven.

The artwork “Paradiset” by Elisabeth Ohlson Wallin was unveiled on Dec. 1 by the St Paul’s church in Malmö, which released a statement praising the inclusivity displayed.

“We are grateful to Elisabeth’s artistry, which enables us to build a credible church that shows that we all, regardless of who we love and identify as, are accommodated in Paradise,” reads a translation of the Swedish statement.

Wallin’s photo illustration includes two men nearly nude leaning against one another, as well as two women, one with her arm wrapped around the other and the lovers locked in gaze. The two same-sex couples are the most prominent queer-affirming imagery in the painting.

Wallin, a queer artist producing work in Sweden since the late 1980s, has often explored the role of religion in LGBTQ affirmation. In 2012, she produced “Ecce Homo,” a recreation of Da Vinci’s The Last Supper with a transgender Jesus Christ, and the work ultimately needed armed guards protecting it from vandalism while on display in Serbia. 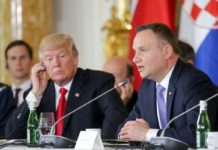 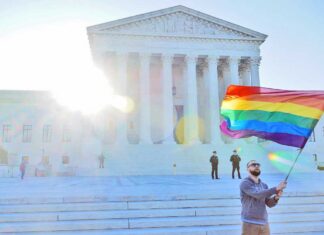 Jason Villemez - September 23, 2020 7:02 pm 0
Lambda Legal hosted a Facebook livestream on September 23 to discuss the importance of the Supreme Court — and a potential third...