The Vatican might have the last laugh on homophobe and pedophile protector Archbishop Charles J. Chaput.

Chaput is one of the masterminds who embarrassed the Pope on his visit to Washington, D.C., by hoodwinking him into a meeting with Kim Davis, the anti-gay county clerk who refused to issue marriage licenses to same-sex couples. The Vatican was so alarmed by what Chaput and fellow bishops connived that the Catholic church’s seat put out a statement that the encounter with Davis was not an official meeting.

Over the years, Chaput has left a trail of tears and pain behind him — supporting child-abusing priests, firing lesbian teachers, refusing communion to LGBT couples and supporting a sort of Catholic conversion therapy, a pray-the-gay-away ministry.

His lack of loyalty to the Pope has become what the military would call insubordination. The current issue is his attempt to influence the selection of his replacement, because the Pope’s choices are not homophobic enough.

The entire petition is based on Chaput’s writings against Fr. James, and the petition, according to moveon.org, was started by one of Chaput’s close friends, Donna Bethell. A simple Google of their names shows the various projects they’ve worked on together. They seem to be very fond of each other.

Look, no one knows who the Pope will appoint, and while it would be an honor for Philadelphia if he appointed Fr. Martin, it is unlikely. So what is the point of the petition? With this cheap and petty shot at the Pope, it’s a smokescreen so the public will not look at Chaput’s failures in his tenure in Philadelphia. Closing schools, protecting abusive priests, church attendance drastically down. The Pope knows a change is needed in Philadelphia, one that will bring people back to a church that teaches tolerance and understanding — a united church, not a fractured church which Chaput made with a tower of hate. I don’t dislike Chaput. I pity him. His ungraceful parting gesture makes him such a small man. 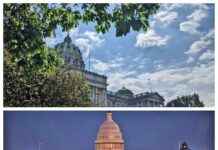 Pennsylvania General Election 2020: Your guide to the Nov. 3 presidential and statewide elections