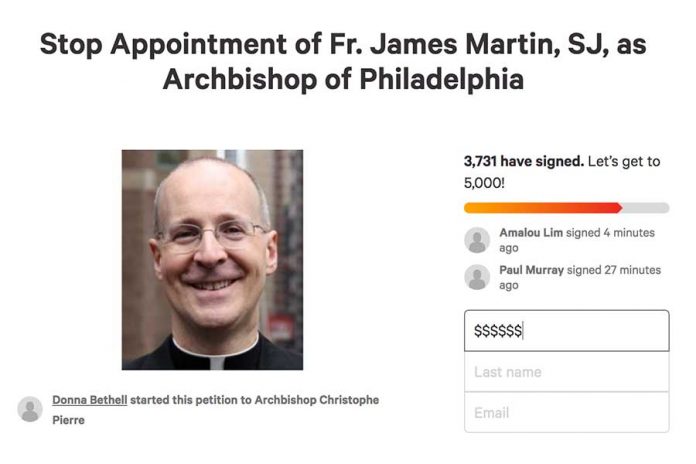 An online petition aiming to block the appointment of a priest with progressive views about the LGBTQ community as Philadelphia’s new archbishop has received more than 3,600 signatures.

The petition, which went up last week, tackles the potential appointment of Father James Martin, a Plymouth Meeting native who is speculated to be in consideration as Archbishop Charles Chaput’s replacement. Chaput, who has been archbishop for eight years, announced his resignation to Pope Francis in September as his 75th birthday crept up on him — an offer that church law mandates.

The potential successor, who hasn’t been formally announced, is a Jesuit priest who authored the 2017 book “Building a Bridge: How the Catholic Church and the LGBT Community Can Enter into a Relationship of Respect, Compassion, and Sensitivity.” In 2016 during the aftermath of the mass shooting at Pulse, an LGBTQ nightclub in Orlando, Martin posted a video to Facebook expressing his support for the queer community, prompting criticism from conservative Catholics. He said in his response that he was “disappointed that more Catholic leaders did not offer support to the LGBT community.”

“Sign this petition and tell the papal nuncio, Archbishop Pierre, who is reported to be collecting references on Fr. Martin, that his appointment would be intolerable,” the Change.org document started by Donna Bethell reads. “Tell him we want worthy shepherds who will be leaders in teaching and practicing the fullness of Catholicism, not more men who will obfuscate and obscure and avoid the inconvenient truths.”

Martin has contributed work regarding his progressive religious stances to media outlets including The Huffington Post, NPR and Time magazine. In September, he traveled to the Vatican to speak with Pope Francis about providing pastoral care for LGBTQ Catholics.

“One of the highlights of my life. I felt encouraged, consoled and inspired by the Holy Father today,” Martin tweeted about the meeting Sept. 30. “And his time with me, in the middle of a busy day and a busy life, seems a clear sign of his deep pastoral care for LGBT Catholics and LGBT people worldwide.”

Last month, Chaput gave a speech in Rome that “There is no such thing as an ‘LGBTQ Catholic’ or a ‘transgender Catholic’ or a ‘heterosexual Catholic,'” PhillyVoice reported. He has also been on record saying that queer people can’t receive Holy Communion in the Archdiocese of Philadelphia and that gay folks aren’t permitted to join parish councils, teach people of faith, serve as lectors or give Communion.

In Sept. 19 commentary on CatholicPhilly, Martin wrote that while he knows “same-sex relations and same-sex marriage” are “impermissible” and “immoral” under church teaching, he doesn’t focus on it because LGBTQ Catholics repeatedly hear this.

“Indeed, often that is the only thing that they hear from their church,” he wrote. “What I am trying to do instead is encourage Catholics to see LGBT people as more than just sexual beings, to see them in their totality, much as Jesus saw people on the margins, people who were also seen as ‘other’ in his time.”

Martin’s post came on the heels of a similar contribution penned by Chaput after Martin spoke about his “Building a Bridge” book at St. Joseph’s University. In it, Chaput called the “bitter personal attacks” on Martin “inexcusable and unChristian.”

“A pattern of ambiguity in his teachings tends to undermine his stated aims, alienating people from the very support they need for authentic human flourishing,” Chaput added. “Due to the confusion caused by his statements and activities regarding same-sex related (LGBT) issues, I find it necessary to emphasize that Father Martin does not speak with authority on behalf of the Church, and to caution the faithful about some of his claims.”

Pope Francis ultimately decides whether to accept Chaput’s resignation and on his successor.