Out gay director Todd Haynes’ new film, “Dark Waters,” is a chilling true story about the unprecedented legal case Robert Bilott (Mark Ruffalo) built against DuPont for poisoning the residents of the town of Parkersburg, West Virginia for decades. The issue-oriented drama, which opened Nov. 27 at the Landmark Ritz Five and will open in additional area theaters Dec. 6, is based on the 2016 New York Times Magazine article, “The Lawyer Who Became DuPont’s Worst Nightmare.”

The film unfolds straightforwardly. Haynes creates a timeline, starting in 1975, when some kids in Parkersburg go skinny-dipping in a toxic body of water. Jumping ahead to 1998, Bilott, a corporate defense attorney, has just been made partner at a Cincinnati law firm. When Wilbur Tennant (Bill Camp), an acquaintance of Bilott’s grandmother, turns up at his firm, insisting that there is something wrong with his cows. One hundred ninety of his animals have died on his land, and, when Bilott visits Wilbur’s farm, he sees evidence of chemicals in the creek along the property. The water not only distorted the animals’ organs, but it is causing irreversible damage to humans as well.

Wilbur has a fair amount of righteous anger, and “Dark Waters” is designed to make audiences angry too. Haynes’ filmmaking is efficient and effective — some might say slick — in this regard. But the story is absorbing. As Bilott learns more about DuPont’s efforts to self-regulate their runoff from a local landfill into the Parkersburg water supply, he also learns to think critically, connecting the dots between money, law and power. The EPA is not monitoring the dangers.

He also gets a lesson in fighting a war of attrition. Once Bilott triggers discovery by suing DuPont, he is buried under mountains of paperwork. He hopes to find a smoking gun — a needle in a haystack — that will prove Wilbur’s case and DuPont’s corporate malfeasance. The evidence he finds is not just overwhelming but also horrifying. Bilott’s speech, around the film’s midpoint, lays out how the chemical company knowingly harmed their employees and created a public health risk.

“Dark Waters” ratchets up the tension as Bilott fights tenaciously to prove his case. The ripple effects are felt as his obsessions take a toll on his family — his wife Sarah (Anne Hathaway) especially — as well as people involved in the case, such as Wilbur, and Darlene Kiger (Mare Winningham), who face the glare of townsfolk that disapprove of suing the area’s top employer.

Sometimes the film’s tension feels manipulative. Haynes uses music to telegraph the emotions, and there are some didactic scenes — as when Bilott has lunch with a chemical expert who explains the harmful effects of C8, the poison DuPont put in the Parkersburg water supply.  A scene late in the film, where Bilott is paranoid about his suit and fears his car has been tampered with, feels gratuitous.

As the timeline in “Dark Waters” extends more than a decade after Wilbur’s initial meeting with Bilott, the film shows the impact of suing corporate America. Haynes emphasizes the value and importance of speaking truth against power,  and that’s a message most viewers will appreciate hearing. However clunky some of the storytelling is, this film is a clarion call to fight against deceptive practices. Watching Bilott’s obsession with the case juxtaposed with Wilbur’s frustration provides audiences with real heroes. Moreover, the parallels to other real-life stories, from the Flint water crisis to the Monsanto cancer settlement, abound.

Haynes’s film, for all its button-pushing moments, succeeds because it puts a human face on its characters. Not just Wilbur, or Bilott, but Bucky Bailey, who was born with one nostril and a deformed face because his mother was a DuPont employee working with dangerous chemicals while pregnant. Bucky gets a cameo in the film, and Haynes does not sensationalize the moment.

As the driven Bilott, Mark Ruffalo, who also produced the film, infuses his character with indignation. Ruffalo conveys the stress and strain Bilott feels with remarkable aplomb, and he makes Bilott’s despair palpable with each setback.

In contrast, Anne Hathaway performs each of her impassioned speeches as if she were campaigning for an Oscar rather than defending her family.

In support, Bill Camp makes Wilbur a sympathetic figure, and Tim Robbins and Bill Pullman both have a few fine scenes that will make viewers wish they had more screen time.

“Dark Waters” takes a more conventional approach to a topic Haynes covered in arguably his best film — his 1995 drama, “Safe,” about a woman (Julianne Moore) who becomes environmentally ill as a result of chemical sensitivity. Nevertheless, this new drama is a strong, important and engaging film. 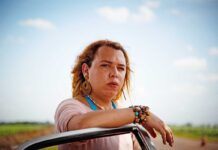 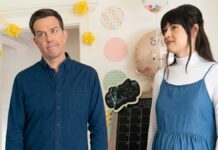 Patti Harrison shines in “Together Together” 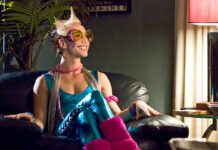 “Another Gay Movie” gets a Director’s Cut