“Recorder: The Marion Stokes Project” is out gay director Matt Wolf’s remarkable documentary about a remarkable woman. The film opens Nov. 22 at the Landmark Ritz at the Bourse. Wolf will be doing multiple post-screening Q&As opening weekend.

The late Philadelphian Marion Stokes created an “unprecedented archive” of 70,000 VHS tapes of 24-hour news channels that she recorded for 35 years in her Rittenhouse Square apartment. The goal of her “project” was twofold: she wanted to show how the power of television impacted public opinion — how media filtered the raw story and held a mirror society.

Wolf’s documentary does its subject tremendous justice, presenting the life of the eccentric but visionary Stokes without judgment. Wolf judiciously uses interviews, archival footage, photographs and reenactments to create a dynamic portrait of a complicated woman. Her staff recounts her routines and controlling nature; family members reveal how difficult she could be in interpersonal relationships; and television historians discuss the importance of her extensive recordings of the news, which started with the Iran hostage crisis in 1979. These perspectives on the private, personal and professional life of Stokes help create a three-dimensional portrait of an enigmatic woman.

Stokes, a librarian, activist and archivist, had a complicated backstory. She lived in foster homes as a child and was adopted. In the early 1960s, with her first husband Melvin Metelits, she was courted by the communist party and spied on by the FBI. As a Black woman, whose voice was often stifled, she lobbied for inclusion — especially when she was a local TV commentator, for “Input,” a public affairs program that aired on WCAU from 1968-71. She met John Stokes, her second husband on the show.

Wolf’s documentary skillfully lays the groundwork for viewers to understand its subject’s obsessions and psychology. The film also reveals Stokes’ less admirable behavior. Stokes once told a stepdaughter to use FedEx if she wanted to contact her father and Stokes. She also berated her son Michael for not consoling her after the death of Steve Jobs, a man she admired and felt a kinship with. Stokes was an early adapter and stockholder of Apple products, amassing everything the company produced. She was also a hoarder who read multiple newspapers a day, as well as tens of thousands of books, and never threw anything away.

But Wolf also captures the importance of her collection and legacy in “Recorder” through anecdotes about and footage of Stokes as well as recreations. She was a big fan of “Star Trek” because of the diversity of the Enterprise crew and the show’s “socialist” messages. Moreover, archival clips show how Stokes saw race being portrayed — often in negative or detrimental ways — in the news media. Wolf also conveys the importance of the archive Stokes built through stunning moments such as a lengthy clip of the 9/11 tragedy unfolding. Four news programs are seen simultaneously, showing viewers how long it took for the media to report the terrorist attacks.

“Recorder” is a fascinating documentary and a testament to Stokes’ indomitable character, as well as her firm belief that knowledge is power. 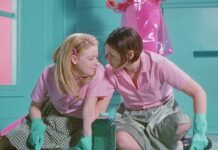