These days, we seem to live in an orbit of incivility. A bubble wherein we don’t take time to listen to anything that contradicts our worldviews. But if we are to survive on this small planet, we might have to learn to get along. Art could save us. Through theater, film, dance and music, we hear stories that are like our own, and stories of lives that we could never imagine. We learn how the other half lives.

Azuka Theatre has built a reputation on offering accessible, thought-provoking and socially conscious productions. Located in Philadelphia, it was founded in 1999 by a group of young artists participating in the Arden Theatre Company’s nationally recognized Professional Apprentice Program. Over the years, Azuka’s collected numerous awards and accolades, including a (now-defunct) Lambda award for Outstanding Arts Event for the company’s very first production: “La Rue des Faux.”

In addition to presenting productions with LGBT content, a number of people associated with the current production could have been this week’s Portrait. I sauntered down to the theater to meet the man who keeps the curtains rising — Jamel Baker, stage manager.

I see that you went to the same college as my brother, Millersville University. Are you from out that way?

No. I was born and raised here in Philadelphia, West Philadelphia to be specific. First, in the Lansdowne area, and then around middle school, we moved to West Oak Lane.

Were your folks involved in the arts?

How did you avoid becoming “Mr. Pickle”?

[Laughing] I was like, “Oh, I cannot do this.” Actually, my father was the one who said that I needed to get out. He told me the pickle company would end with him.

So as a kid, did you like pickles or hate them?

I loved them, still do. They made pickles, sauerkraut and peppers. I hated the peppers and sauerkraut, but the pickles were alright by me!

I was involved in some sports, track mostly. And rugby for like a hot second. I like to try new things, but I pretty much stopped any sports by my second year of college, especially rugby.

Right? Because I’m like this little person, and my friend who got me involved and all his friends were like giants! I was like, come on now!

What was your worst sports injury?

I have this scar on my leg, right here. [Laughing] And it happened during practice, not even an actual freaking game, which made me even more mad.

What was your specialty in track?

Just running. I didn’t do hurdles or long jump or any of that; I left it for my cousins who were into that stuff.

When did you get interested in more creative things?

When I was six or seven, I used to draw comic books — that was my first little foray into the arts. It was cheesy stuff like a man who was a cloud and could create rain — weird things like that. I didn’t get into theater until college. When I was a kid, my parents would take the family to see shows, and I never wanted to go. I didn’t want to sit in a dark theater for two hours and watch something. And now that’s my job!

What brought you into the light, or the darkness, so to speak?

It was when I was at Millersville. I wanted to study broadcast and found I didn’t like it. I don’t know if it was the profession or just the people and that particular program at the school. Fortunately, I had a friend who was working on a show. It was “Little Shop of Horrors,” and they needed a soundboard operator and asked if I would do it. I ended up really liking it and switching my major to theater. It was cool because Millersville’s theater program is so tiny that you had to do and got to learn everything. I got to do lights and run sound and build props and even did some acting. I really enjoyed it.

Did you enjoy being on stage, or do you prefer being behind the curtain?

Did you have to go the full monty?

Well, the school is in Lancaster, so you can’t quite go there. We were in dancing belts, and they actually had to call in priests or something to deem that what we were wearing was not objectionable. We danced behind these screens made of parachute material, so all they could see were our shadows.

Yeah, and I had to sing and dance. The worst part is that they gave me this giant afro wig to wear, so when we got undressed, I had to figure out how to pull my shirt over my head without popping the wig off! They wanted me to grow a beard, too, and that was a pain because I can’t seem to grow a regular beard.

What is your degree in?

Speech communication with a concentration in theater. I got my bachelor’s from Millersville and then tried to apply to Rutgers for grad school, but since I just started theater, they wanted me to do a lot of work first to get theater experience, and I ended up getting enough work so that if I did go back to school, I’d probably change to something else that I didn’t know. So I’m kind of glad it didn’t work out.

What was your first paying gig?

I was an assistant stage manager at Theatre Exile for their Fringe show “Irony.”

And you’ve gotten steady work ever since, that’s fantastic! What was your biggest disaster?

We had a show where we and the actors had to move a lot of set pieces around, and they were heavier than anticipated, I still have a mark from it.

What was your favorite show?

That same show because everyone lived!

Tell me about the current show, “Sunset Baby.” The program description says it “revolves around the reunion of a former Black revolutionary and political prisoner with his estranged daughter, Nina. At the center of this fraught and broken relationship are the now historically significant and valuable letters Nina’s mother wrote to her father while he was in jail. Caught in a tug-of-war over these documents, father and daughter confront their shared past.”

Yeah. At the heart, it’s a story about family. We’ve been in rehearsals for about three weeks. It’s a great show.

Tell me a little of what a stage manager does?

It’s a little of everything. Your first job is to write down every single thing that happens on that stage or in the rehearsal space — all the blocking, all the light cues, call times, every stage direction, and then make sure when the play is up that everything goes smoothly.

Has an actor ever not shown?

No, I’ve had them be late, which always gives me a heart attack, but never a no show. These are small companies, so there usually is no understudy. So unless you’re under a bus, you better show up.

By the way, I also am the general manager for burlesque, which is a lot looser. I dance with them too.

Cool. When did you come out?

In middle school, eighth or ninth grade. I had crushes on friends of the same sex, but at the time I didn’t know if it was an actual crush or some kind of bromance thing. But by high school, I was out to everyone.

No, when I told my dad, he was like, ‘Whatever makes you happy.” We had some family members who weren’t giant homophobes, just uninformed, and about them, he said, “You’re my son, and if anyone has a problem, who gives a s–t.” … And they’re all very supportive now. And I never had a problem in school; there was never any bullying or anything. I was just me, and no one seemed to care. I had my first boyfriend in college.

What extracurricular things were you in?

[Laughing] They had enough Black people at Millersville for that?

They caught me the first day! I walked in, and I was like “Oh wow, OK!”

I used to be called Pee Wee. I still don’t know how the hell that happened! That stuck until I was 27; I’m 33 now.

I guess no Disney cruises for you. What do you like in a guy?

And what do you notice first physically?

His smile or eyes.

What would you want for your last meal?

Anything as long as I get French fries with it. I love potatoes!

Do you talk in your sleep?

I’m not sure, but I used to sleepwalk when I was a kid.

What do you like to do outside of the theater?

I want to say sleep, but that ain’t gonna happen! I’ve been becoming really active recently. My dad had a heart attack and joined a gym, so I joined and started going with him to make sure he didn’t well, die, and then I really got into it. That pushed me to do more, and now I’ve started a lot of outdoor activities like rock climbing and hiking. 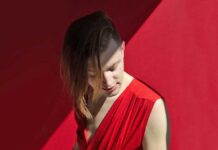 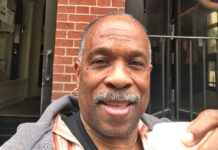 Jay Johnson: Out and About 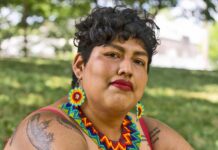 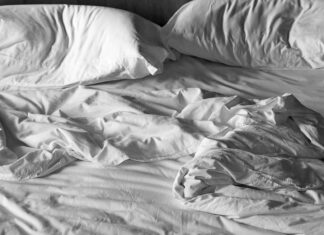