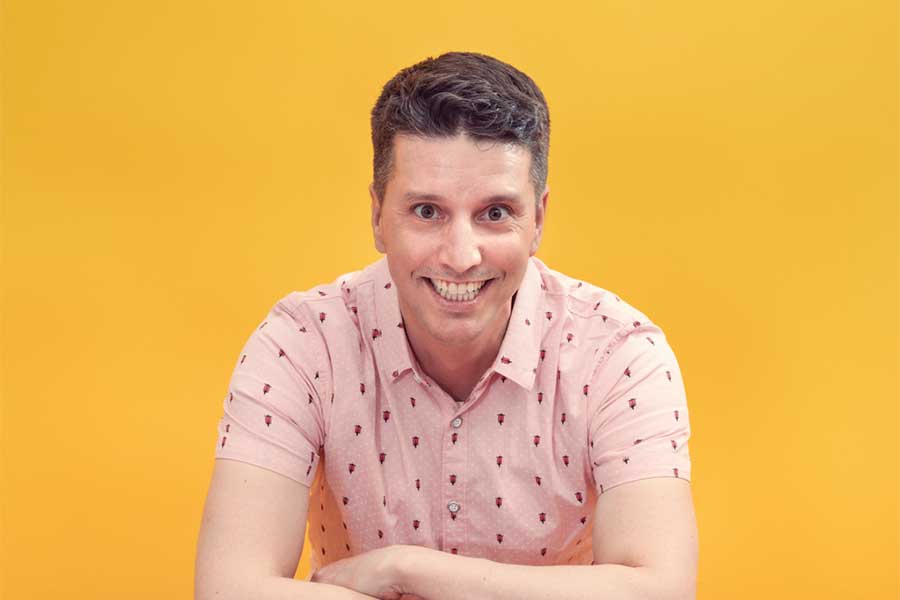 Standup comedy is going to the dogs…and cats. Out Canadian comedian and veterinarian Ted Morris takes his bedside pet manners to the stage with his first comedy album, “Dawn of the Ted.”

Morris has spent the last 20 years tending to people’s small fur-babies during the day and taking the stage at night to make people laugh, sometimes at the darker aspects of being a vet.

PGN talked to Morris about his new album and how he turns some people’s bad days at the vet’s office into good nights at the comedy club.

PGN: You’re making medical professional money. Why be a comedian?

TM: Standup was something I never thought I would do. I fell into it, and I can’t stop. It’s an addiction. It’s much more fun than my day job.

PGN: People are really sensitive and sentimental about pets and animals. Is it challenging to incorporate humor into your profession?

TM: I never used to touch on my day job because I didn’t think it was interesting to anyone at all. Then I was telling work stories to comedian friends of mine, and they said “Why don’t you talk about this on stage?” Sometimes it’s awkward. One time I was counseling a woman about her ancient dog whose time was coming, and she might want to consider euthanasia. And then I was doing some cat-killing jokes on stage that night, and she was in the audience. So that was slightly awkward. But I’ve had the opposite where people had just put their cat down and decided to go see a comedy show and found it quite cathartic to hear me talking about it. I definitely do have some people come up to me and tell me they were offended afterward and I always say, “OK!”

PGN: How long have you been doing standup comedy?

TM: I stepped on stage for the first time 20 years ago. I was very much a hobbyist for the first five or six years. I was still in med school so I was limited by location and spare time for the amount of comedy I could do. Then, when I moved to Toronto after I graduated, it was to do tons of standup. I didn’t realize how much time it would take to become a competent veterinarian. I had a very slow burn to start, so I feel like I’m making up for lost time now.

PGN: Are you excited to release your first comedy album after all that time?

TM: I’m thrilled about that. I tend to do things when I’m overly prepared. I’m a couple years behind what I should be doing. I tend to wait until I’m very confident about what I’m putting it out. I think it’s crazy. Everybody is putting out an album these days. I look at comics that have been doing it for five years and yeah, you’re funny but I can’t imagine putting any of my original material on an album in perpetuity. I think I may have waited slightly too long, but it feels like the right time for me.

PGN: Canada has socialized health care for people. Do they have that for pets as well?

TM: It’s purely out of pocket unless you have insurance for your pets. Definitely, in Canada, people have a twisted idea of how much health care costs. It’s a challenge every time. It’s the worst part of my job. I wish I wasn’t the one who had to go over the finances. I wish I could tell them what their pets need and someone else could come in and go over the finances. The reality is I’ll come up with my Plan A and act as if the pet has socialized medicine and the take things down from there.

PGN: What’s the biggest medical bill you’ve ever had to drop on a pet owner?

TM: The biggest single estimate I gave was three grand to fix a puppy with parvovirus, with a chance that they might spend all that money and end up with a dead puppy. But they spent all that money, ended up with a very alive puppy and still complained about it. “He said it was going to be three grand, and it was, and we’re mad.”

PGN: What’s more emotionally taxing for you: having to give bad news to pet owners or trying to make it in the comedy business?

TM: My job would be very easy if we didn’t have to worry about owners. I had to take a year off a couple years back because I was getting very burnt out. Now I’m looking at taking an extended break because it’s just too much. It’s a lot of giving people bad news, dealing with very difficult situations and a lot of people with unrealistic expectations about what we can actually do for their pets, especially if they hamstring me with financial limitations. Some people want to do everything and I’m like, “I don’t care how much money you spend; there’s absolutely nothing you can do for your cat.” I often have to talk people out of making really bad financial decisions. Is it really in your cat’s best interest to do all this stuff to keep them alive for another week? It’s an emotionally draining job for sure.

PGN: So, it sounds like comedy is somewhat healing for you.

TM: Absolutely. If I can find a way to make my day funny on stage, it takes a bit of the sting out for sure. I use it as an outlet, and I also use my comedy at work. If I can make a tense or depressing situation a little bit lighter with comedy, I will definitely do that. I turn a lot of my euthanasias into wakes. People are crying and laughing and telling stories. It always confuses the staff. Why is everyone laughing? What’s going on in there? Just don’t ask. It definitely helps to lighten the mood. My clients like that. Most of them know that I do stand up and enjoy coming to see “the fun vet.”

Ted Morris’ “Dawn of the Ted” is available via Howl & Roar Records. For more information, visit tedmorriscomedy.wpcomstaging.com/ or howlandroarrecords.com.