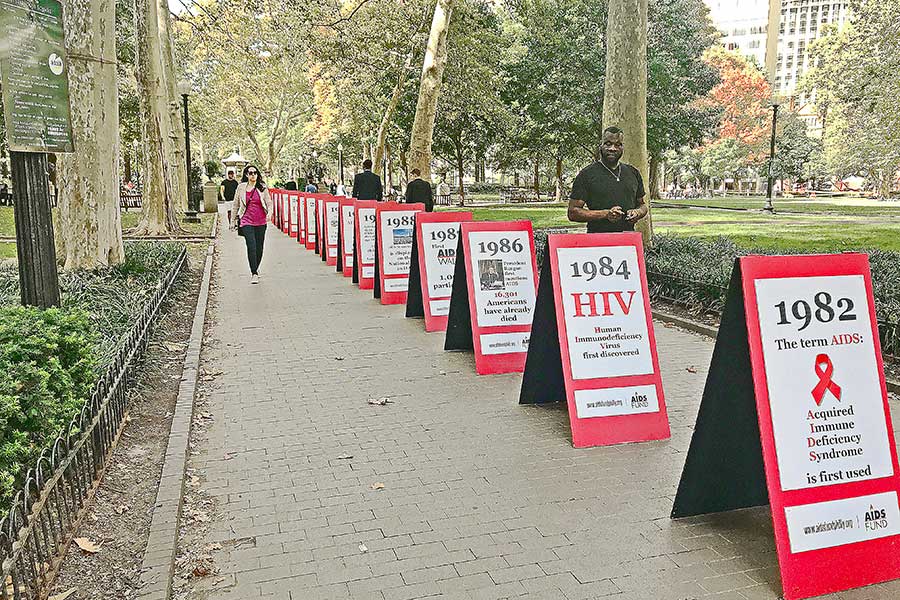 AIDS Walk Philly knows the battle with HIV/AIDS is not over.

“With the advances in treatment and care, we’ve lost a sense of urgency around this epidemic. And yet, we still know there are many people who don’t have access [to care and information],” said Robb Reichard, executive director of AIDS Fund.

No longer “acute and fatal,” the disease has been effectively downgraded to a “manageable, chronic condition.” Since 2012, the number of new HIV diagnoses has stabilized, and a person diagnosed with HIV at 20 can expect to live to 70, according to a report by the Centers for Disease Control and Prevention.

But success hasn’t affected all demographics equally. In 2017, the CDC projected that half of Black gay men and a quarter of Latino gay men will be diagnosed with HIV in their lifetimes, if current HIV diagnoses rates persist. Impoverished urban areas have disproportionately higher infection rates.

As the largest public awareness event around HIV/AIDS in Philadelphia, AIDS Walk’s goal is to give all Philadelphians the information necessary to protect against and prevent HIV.

This year, the walk focuses on the benefits of pre-exposure prophylaxis (PrEP), sold as Truvada, an HIV medicine that can prevent someone who is HIV-negative from contracting the disease, and Undetectable = Untransmittable, or U=U, the message promoted by UNAIDS that folks living with HIV who have achieved an undetectable viral load are not at risk of sexually transmitting the virus to an HIV-negative partner.

“We want to be sure that everyone has the most current information about what’s happening with the epidemic, so we can get to the point where we’re at zero new infections, zero deaths and zero stigma,” said Reichard.

Through organizations like the Mazzoni Center, case managers apply for funds on a client’s behalf. Once approved, the money is distributed to match individual requests. One person may need $50 for a new cane, while someone else requests $500 for a security deposit.

“We had a gentleman who had had a stroke and was living in a second-floor apartment, and when he was released from rehab, he was in a wheelchair. He had to be literally carried up the steps to get into his apartment and then wasn’t able to leave his apartment because he was wheelchair bound,” said Reichard, adding that the man’s caseworker found him a first-floor unit, but the man couldn’t cover the deposit.

“So we helped with that,” said Reichard. “I spoke to the medical case manager last week, and he’s doing really well.”

This year’s walk is a two-hour loop around the Ben Franklin Parkway. The donation booth opens at 7 a.m., along with the display of the 25-block-long AIDS Memorial Quilt. Ceremonies begin with a reading of the names of Philadelphians who lost their lives to HIV. Then, at 8:30 a.m. the walk begins.

“I just encourage everyone to come out and be a lifeline for someone with HIV,” said Reichard.