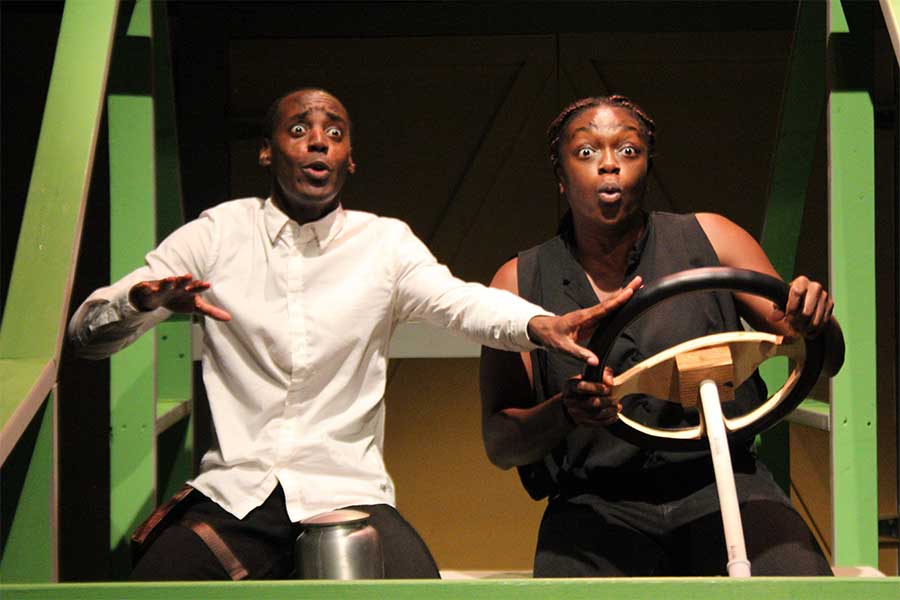 Tribe of Fools — a theater company that combines traditional playmaking with movement-centered storytelling — is known for producing work with a lot of local flair. The company’s entry in this year’s Philadelphia Fringe Festival will be no different.

“Operation: Wawa Road Trip,” running Sept. 6-21 at Proscenium at the Drake Theatre, follows a pair of siblings who travel from Dayton to Philly to enact their father’s dying request: that his ashes be scattered in the parking lot of the beloved convenience store chain.

Out Philly performer Zachary Chiero has long been a key player within the company, as both an actor and choreography. For this production, he takes on the task of telling this uniquely Philadelphian story through dance, acrobatics and circus movement. PGN spoke with Chiero about the company’s particular aesthetic, how he balances a thriving career as an in-demand actor and dancer and his love of Wawa.

PGN: What came first for you: acting or dancing?

ZC: It was definitely acting. I always liked creating strange and silly characters, and I just love embodying other people and trying to figure out how they think. But I’ve also always been a very physical person; I talk with my hands a lot, and I’m inclined toward the physical side of storytelling. Working as a choreographer came later, but physicality was always a part of the kind of performance I did.

PGN: How did you become involved with Tribe of Fools?

ZC: Ten years ago, I was on tour with Enchantment Theatre Company, a children’s theater company here in Philadelphia. Terry Brennan, the founder and artistic director of Tribe of Fools, was our company manager — and shortly after that, he became my roommate. He needed some help with a production of “Dracula” they were doing, and I started out as a house manager. Soon he started asking me to audition, and like that, I’ve been a part of the company pretty much every year since then.

PGN: Movement is at the heart of every Tribe of Fools show. How do you begin to create choreography for an original work, knowing that it is going to be so integral to how the story is told?

ZC: We start a lot with themes and general outlines, even before casting has started, and we talk about what kind of vocabulary we see ourselves exploring and what kind of movement will be useful for the story we want to tell. Sometimes we’ll say, “I think we want to open with this kind of movement sequence” to get the show going. Brainstorming happens as we’re developing the idea, and we hone in on it when casting is complete because then we have an idea of what skills people are bringing to the table. I kind of craft everything with Joe [Ahmed], the director, or with Terry, who is often the acrobatics consultant. We see how we can feature our actors to the best of their abilities and use those elements to tell the story.

PGN: What can you tell me about “Operation: Wawa Road Trip”?

ZC: I really am excited for this show. I feel like it’s going to be a stretch for us. The show deals with the idea of family, of loss and grief, and the things we tell ourselves and our loved ones in order to cope. Having those themes at the heart makes for some very touching moments throughout the show — but, of course, we need to incorporate our signature big, physical style. Putting the story in a road-trip setting gives us plenty of room for wacky misadventures and ridiculous characters, of which there will be many. It tickles me quite a bit, and I’m looking forward to seeing all the amazing characters come to life. And you see a real character arc with the two main characters, which will be very quintessentially Tribe of Fools but also a little out there. I’m really proud of Joe and of our writer Caitlin [Corkery] for the work they’ve done.

PGN: Of course, I have to ask: As someone who lives in Philadelphia, what is your personal relationship with Wawa?

ZC: I went to school in Allentown, and that was my first exposure to Wawa. I’m from New York, so the closest equivalent I had growing up was 7-11…but Wawa is so far beyond that. I have developed a deep love of Wawa over my 10 years living in Philadelphia. In my first few years of touring, too, I got a taste of the Sheetz life, and I have to say that I’m definitely a Wawa boy.

“Operation: Wawa Road Trip” runs Sept. 6-21 at the Proscenium at the Drake, 302 S. Hicks Street. Tickets and information can be found at fringearts.com/event/operation-wawa-road-trip/.