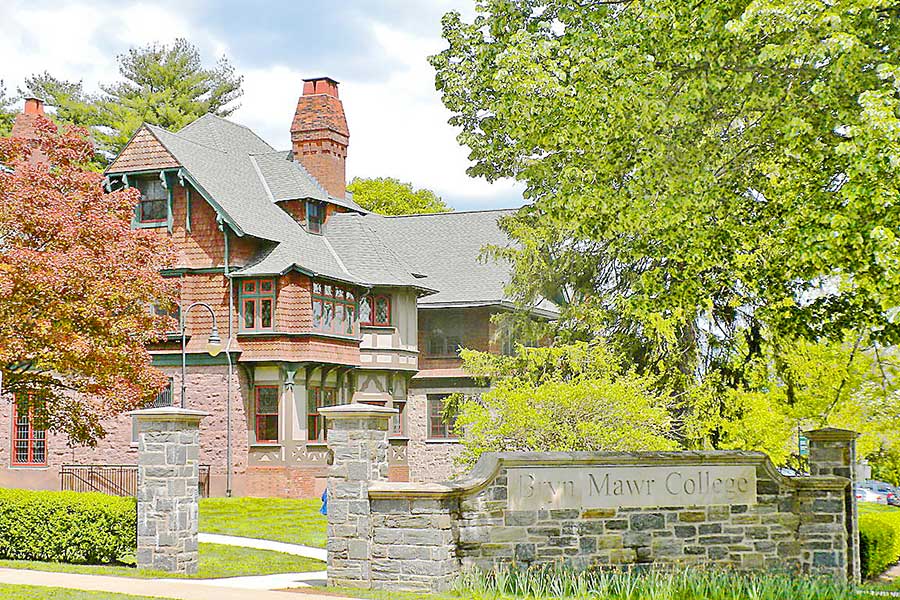 When it comes to inclusivity on campus, Bryn Mawr College is the new number one.

According to The Princeton Review’s annual ranking of college campuses, released this month, Bryn Mawr College, situated at the Western cap of Philadelphia’s Main Line, earned its spot at the top of LGBTQ-friendly schools in the United States.

“I mean, I can’t say it’s surprising,” said Francesca Krivitsky, a recent graduate of the class of 2019. “People definitely have a view of Bryn Mawr as being very LGBT-friendly and that’s definitely something that I thought about when I was 18 and applying to schools.”

The ranking, included in the Princeton Review’s “The Best 385 Colleges: 2020 Edition,” draws from the opinions of 140,000 students who attended the considered colleges during the 2018-19 school year.

Krivitsky, who is gay, said she chose Bryn Mawr, in part, to find a like-minded community.

“It was definitely the first time in my life I had so many gay friends, trans friends, which is unique. …It’s definitely a place where you feel somewhat safer to explore certain things and be more open just because of how many students there are around you who are also openly LGBT,” said Krivitsky.

The Princeton Review rates colleges by category, analyzing everything from  “academics” to a school’s “social scene” through voluntary student responses to 80 questions. Students formulate answers along scales — “strongly agree” to “strongly disagree” or “excellent” to “poor.”

Quality of life for LGBTQ students, a section that stamps outlying colleges as either LGBTQ-friendly or unfriendly, is determined by student answers to a single statement: “Students treat all persons equally, regardless of their sexual orientation and gender identity/expression.”

Essentially, the LGBTQ ranking is a litmus test, a trait that’s been called into question.

In the article, “Deeply Flawed Ranking: The Princeton Review ‘LGBTQ-Friendly and Unfriendly List’ Does a Disservice to Prospective LGBTQ-plus Students,” written for the website Campus Pride, Chelsea Fullerton, the Director of Pride Center for Sexual Orientation and Gender Diversity at Lehigh University in Pennsylvania, disputes the scope of the list’s ranking system, especially considering the weight it’s given by the media and prospective students.

“Regardless of how much validity you attribute to the Princeton Review’s methodology, this one-dimensional method of measuring inclusion is far from the complete picture,” said Fullerton.

Fullerton, writing in 2017, disclosed that while Lehigh University has appeared on the LGBTQ-unfriendly list three years running, the ranking does not consider Lehigh’s institutional services, like gender-inclusive restrooms, and a “highly-trafficked” safe space for LGBTQ-plus students and allies, or the college’s efforts to improve.

“I don’t want to speak for others, but I’ve seen other students, specifically trans students, because the article came out, saying this doesn’t super reflect me; I’ve had negative experiences here. So, I think that’s definitely important to mention,” said Krivitsky. “It’s not a gay paradise.”

“I did hear people saying, ‘At the same time, it is one of the places I did feel safe, just because there were other students around me that were going through the same things that I was,” added Krivitsky, referring to negative experiences.

In an attempt to foster a more inclusive campus, Bryn Mawr, a historic women’s college, expanded its admissions policy in 2015 to include all eligible applicants who identify as women, whether cis, trans, intersex or those who do not identify within the gender binary.

Bryn Mawr’s expensive LGBTQ programming also includes Spectra Sexuality and Gender Education, a collaboration between the student body and Pensby Center for Community Development and Inclusion focused on promoting a campus-wide understanding of gender and sexuality as identities existing on a continuum. The university additionally offers a gender and sexuality studies major, featuring courses like “Gender and Science.”

Bryn Mawr placed in two additional categories of The Princeton Review’s 2020 Edition. The private liberal arts college ranked number one for “Most Active Student Government” and number two for “Most Beautiful Campus.”