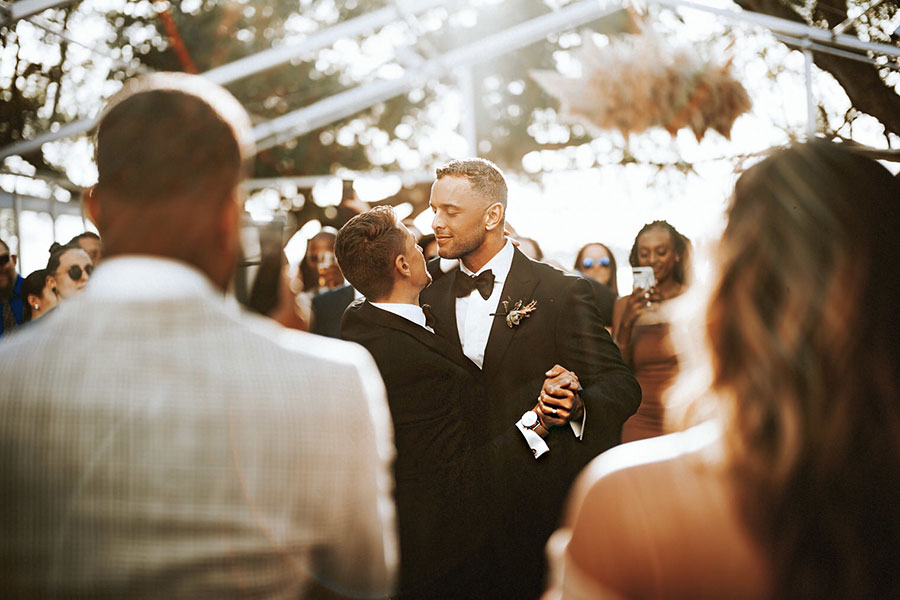 Two years after Tommy Berner proposed to Anthony Reto on vacation on the island of Mykonos, they vowed to spend the rest of their lives together on May 9, 2019, in a ceremony officiated by their friend Ian Morrison in Charleston, South Carolina.

PGN reported on the couple’s engagement in 2017.

“We thought that experience was magical,” Tommy said, “but we had absolutely no idea what was going to be in store for us when we decided to have 100 of our closest family and friends fly down to Charleston.”

In the three months after the event, the Berner-Retos finally felt something they hadn’t yet in 2019 — like they could relax.

“We already kind of felt married,” Tommy said. “But what I noticed immediately, there’s definitely a sense of calm that there was not for the last year.”

The couple chose their Charleston location because of its warm climate as well as its architectural resemblance to parts of Philadelphia.

“You’re close to the beach, you have palm trees, but you also have that whole historic element to it as well,” Tommy said.

“It’s kind of like Old City but a beach town,” Anthony added.

Though they had slight reservations about South Carolina’s level of openness toward the LGBTQ community, the couple was delighted to find nothing but acceptance in the time they were in Charleston.

“Even when we were getting our engagement pictures taken, we had two or three cars pull over simply to say congratulations,” Tommy said.

The venue their wedding, Lowndes Grove Plantation, held a lot of heavy historic connotations for the couple.

“It took a lot of thought and consideration to decide that we were going to run with it,” Anthony said. “Tommy’s mixed-race; we’re a gay, interracial couple. Ultimately we decided this is kind of what brings about change in the world, is changing stereotypes.”

The Berner-Retos were conscious about their decision as they invited a diverse group of people to their wedding and wanted to make sure folks knew their celebration was about sparking change.

“That’s really what our marriage was there to do anyway,” Anthony said. “To break down borders and really challenge the system.”

The couple turned their wedding day, a Thursday, into a wedding weekend by planning events that would give their guests a little taste of Charleston. Their friends and family enjoyed brunch, bowling and ghost tours around some of the city’s historically haunted sites; they invited their guests to spend time on a rented boat for a day; and spent the last night on a beer crawl.

“Having people from all different facets of our life come all the way down to Charleston, and just enjoy their four or five days there with us, it was magical,” Tommy said. Their French bulldog Pierogi was also there with them.

Considering theirs was the first same-sex wedding that their parents and parents’ friends had ever attended, the couple felt like this was an eye-opening experience for them, seeing marriage equality in action for the first time.

The couple initially met through a Words with Friends match-up before meeting in person, so they decided to weave an element of that into their wedding with napkins that had Scrabble pieces on them spelling out their names.

Throughout their nearly eight-year relationship, the Berner-Retos are still more than happy to be together.

“I’ve never had anybody demonstrate the level of total 50-50 partnership that I think that we bring to the table every day,” Anthony said. “I think that our entire relationship the past two years has been a give and take. I’ve never felt beneath or above my partner, I have always felt 100 percent even keel.”

In the spirit of a mutual love of traveling, the newlyweds spent three weeks in Thailand for their honeymoon.

“It was so picturesque and amazing,” Tommy said.

As for what the future holds, the couple plans to take things as they come, relish life as a newly married couple and keep traveling.

“Nothing’s off the table,” Tommy said. “We have a really amazing relationship and a really nice time together, so I just really want to continue to build on that and see where life takes us.”