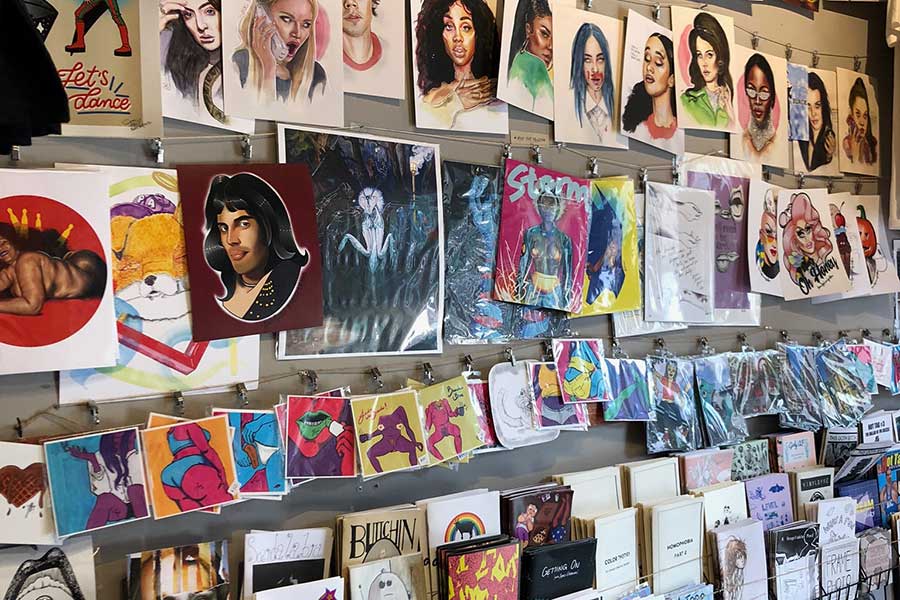 Two out Philly artists and merchants are aiming to reignite the retail mojo that was once a signature of the South Street corridor.

The iconic stretch was traditionally a panoply of artsy and avant-garde shops, clothing boutiques and eateries — many of which fell victim to high rents or were rendered obsolete by retail chains.

While South Street west of Broad has developed into a commercial hub, the more-famous blocks on the east side have become host to cookie-cutter bars, pizza and steak joints and chain clothing stores — plus high-priced housing and empty buildings.

Nicole Wiegand and Nicole Krecicki are hoping to rekindle the corridor’s unique character with the opening of South Street Art Mart, the creative couple’s newest shop. They have a vested interest.

And they have individual experience with running businesses. Wiegand owns Night Owl Designs, a kitschy jewelry and housewares outfit, while Krecicki vends her own artwork and clothing imprints through a company called Taped Off TV.

And they originally operated South Street Art Mart as a pop-up on South Street. It opened in November 2018, at the behest of the South Street Headhouse District, as an experiment for the holiday-shopping season.

And then, said Krecicki, “it took on a life of its own, and it was something we wanted to keep going. We were able to secure this space permanently.”

Added Wiegand, “People were really receptive to it and then we realized the neighborhood was receptive to it. There’s still a desire for something like this that I feel is underrepresented. We kept getting that feedback from people: ‘Oh my God, it’s like old South Street.’”

Krecicki said bringing back that spirit is important to her and Wiegand, who has worked in South Street’s Condom Kingdom for 12 years and now manages it while co-running her new joint venture.

Windfelder and Jolles have been great neighbors and supportive of the Art Mart from the very beginning, according to Krecicki and Wiegand.

The Art Mart has a friendly and enthusiastic staff and eclectic music, along with a floor-to-ceiling stock of eye-catching clothing, accessories, décor and artwork. The walls are covered with merchandise like punk-rock T-shirts and prints bearing images from Billie Holliday and Basquiat to Beyoncé and Britney Spears. Pins, accessories, stickers and housewares come in styles like ’80s retro pop, throwback activism, horror and punk.

The shop also features a plethora of local artists, reflecting the couple’s commitment to the local arts scene. In this regard, diversity is especially important: Krecicki and Wiegand said they want to ensure people of color and queer folks are represented.

Krecicki has participated in vendor events for over a decade and remembers being the only person of color and/or queer vendor on numerous occasions, she said.