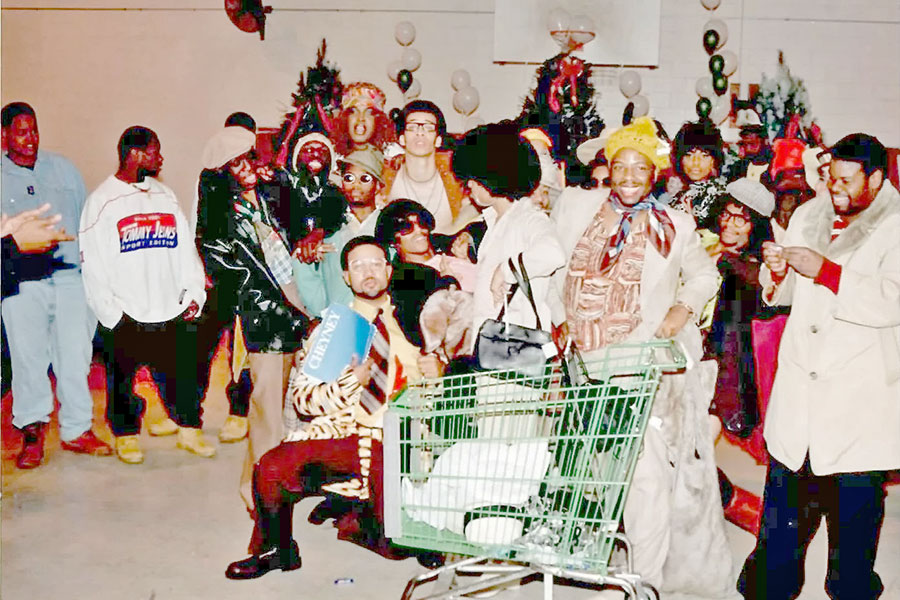 It was August 1989 when the city’s first ball — dubbed Onyx Ball for organizer Michael Gaskins, late mother of the House of Onyx — was held. The anniversary will be celebrated this weekend at Lithuanian Music Hall.

With the emergent popularity of the show “Pose” and the continued success of “RuPaul’s Drag Race,” this context of ballroom has become fashionable and trendy. Yet, these balls have a rich history.

In the 1970s — years before the House of Onyx — New York City was the mecca of ballroom. The scene emerged during the Harlem Renaissance with the House of LaBeija and later was immortalized by the documentary “Paris is Burning.”

Local pioneer Alvernian Davis, known in the scene as Alvernian Prestige, attended one of the famed New York City balls in 1988, escorted by none other than Gaskins.

Davis was 16 when he met the house mother and joined House of Onyx. After his NYC experience, Gaskins was determined to throw a Philly-based ball, recalled Davis.

That first local ball had “an OK crowd,” he said.

“It was new to Philadelphia. It was our first ball. New York had already had balls 20 years prior to us.”

The scene was exciting and new to a teenaged Davis — but, he noted, “I wasn’t really on the end yet of knowing the disparities about the LGBT [community] and the ballroom scene.”

Ballroom was the sole space for people of color in the LGBTQ community during a time when many peers were dying from AIDS, and it allowed for free expression in a safe space — and without the exclusion felt from the white gay community, said Davis.

The emergence of ballroom in Philly led Davis to try his hand at his own house. He was still a teen when he left House of Onyx and created House of Xavier.

As a result, he said, many community members underestimated him and wouldn’t allow him in clubs. House of Xavier was open only six months when Davis shut it down.

While Gaskins founded the Philadelphia ballroom scene, Davis pioneered the movement, striving to help LGBTQ youth as Gaskins had helped him.

In 1999, Davis saw Jacen Bowman, now also known as Jacen Prodigy, in The Gallery in Center City, and the seeds for a new ballroom generation were planted.

“He had approached me about being a model for Prestige Entertainment,” Bowman said. “I didn’t know what technically a ball or a house was; I had just known I was going to a model show.”

Six months later, Bowman finally went to an “audition” and discovered it was actually a house meeting.

“It was my first time ever being around transgender women, drag queens and other gay people,” he said.

The ballroom was “Hollywood, our chance to be superstars that we always dreamed of being.” It was about “brotherhood, sisterhood,” said Bowman.

“A lot of times when I was younger, there were specific places for black and brown people and they were spaces that we loved, celebrated and appreciated. That’s really what the ballroom scene has meant to me and meant to Philly.”

If the name Jacen Bowman sounds familiar, it’s because he’s a celebrity makeup artist in addition to being mother of House of Prodigy.

He said the ballroom scene helped him recognize his talents, and he cultivated them. Bowman has done makeup for clients such as “The Real Housewives of Atlanta” stars Nene Leakes and Porsha Williams, model Yaya Decosta and Angela Rye.

He credits his long résumé to a support system that pushed him toward success, with the ballroom scene playing a prime role.

He said his biological mother, Patricia Gordon, set the tone for the kind of role model (and house mother) he wanted to be, while Mann Prodigy, Lil Mike and Jamal Milan — who had all become house fathers to the then-teenaged Bowman — made sure he stayed on the right path.

As a house mother, Bowman said he wants to instill similar ambitions in his children.

“My thing is to make sure they’re all stable and all doing what they’re supposed to be doing in the House of Prodigy: working their experience into dancing, modeling or whatever it is they want to do. I just push them to be the best that they can be.”

Meanwhile, said Davis, the 30th anniversary of the Onyx Ball is monumental — because, in addition to marking the birth of Philly ballroom, it’s celebrating three decades of support and legacy.

The Onyx Ball and House of Alvernian led to the creation of “Philly Vogue Nights,” “Elements of Vogue” and the “Dorian Corey Awards Ball,” among other notable events in the scene.

This year’s Onyx Ball will display images of the Philly scene’s icons and legends — some of whom also will be there in the flesh.

A $1,000 grand prize will be awarded for “B.Q. Pop, Dip and Spin (The Old Way),” in honor of Alvernian Prestige (Davis), “celebrating 30 years of voguing the Old Way!” according to the event listing.

With a new generation entering the scene, it’s important to preserve the history of the culture, Davis noted. As part of the emerging crowd, Bowman said he hopes ballroom can continue to thrive by “training through the passing of time and by passing the baton to the new generation.”

The Onyx Ball will be held at Lithuanian Music Hall, 2715 E. Allegheny Ave. Doors will open 5 p.m. Aug. 3 and the ball will run 8 p.m.-2 a.m. For more information, visit shannongarcon.com/event/onyx-ball-philadelphia-30th-anniversary.