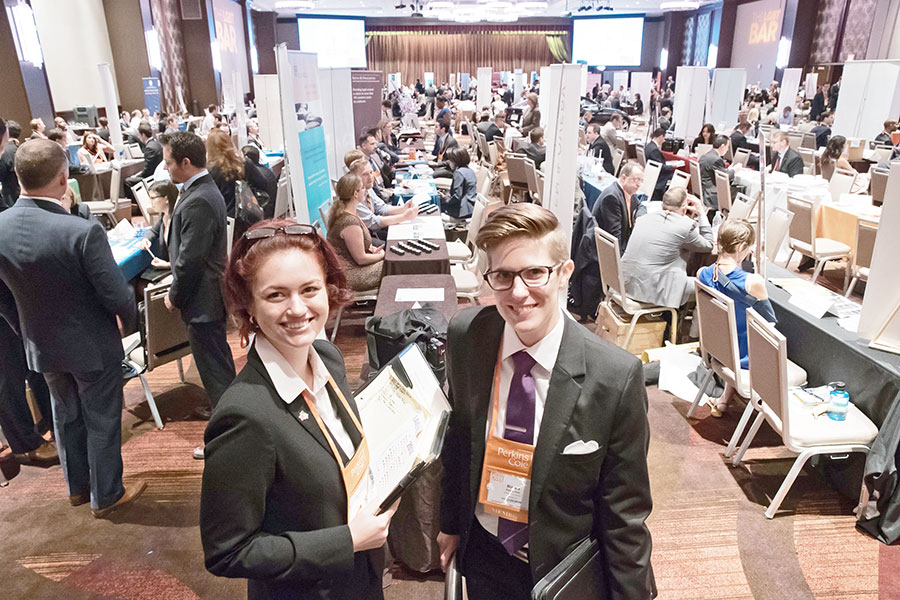 The largest conference for LGBTQ and ally legal professionals in the U.S.  returns to Philadelphia this year.

The three-day program is packed with panels focused on issues of LGBTQ employment discrimination, LGBTQ youth homelessness, federal HIV policy, “gay and trans panic” protections and a host of other subjects.

“We passed gay and trans panic protections for LGBT victims in eight jurisdictions, and we’re pending in nine jurisdictions,” said D’Arcy Kemnitz, Executive Director of the LGBT Bar Association. “Where there’s a will there’s a way, and we’re excited to be seeing some successes.”

LavLaw last took place in Philly in 2002, so the LGBT Bar Association staff is happy to return to the City of Brotherly Love, Kemnitz mentioned. This year’s conference reception, or “Gayla,” will take place in Drexel University’s Kline Institute for Trial Advocacy, and is co-organized by the Gay and Lesbian Lawyers of Philadelphia (GALLOP), Lambda Legal, New York’s LeGal, the National Trans Bar Association and the Philadelphia Bar Association’s LGBT Rights Committee.

“It’s an opportunity to show those memberships and national a little bit of flavor of Philadelphia,” said Amanda Dougherty, vice-chair of GALLOP.

Music will be provided by Philly’s own DJ Kash, also known as Ashley Brandt, as well as performances sponsored by the LGBT bar and lounge Tabu. DJ Kash works as a doctor and completed her residency as a transgender surgical fellow. “We’re happy to connect her with the National Trans Bar as well,” Dougherty said.

Considering most of the conference meetings and events are fairly formal, the opening reception is a good place to make connections in a more relaxed environment.

“It’s a tremendous way for folks to meet other LGBT attorneys, judges and law students from around the country, said James Vandermark, GALLOP’s Chair. “I think this is a much more informal opportunity to relax and talk to folks and not be on the spot.”

In addition to workshops, career services and networking opportunities, the LavLaw team is proudly hosting Judy Shepard, this year’s recipient of the Frank Kameny award. The award is granted to a member of the LGBTQ community who does not hold a U.S. Juris Doctorate, but whose work has led to substantial LGBTQ legal achievements.

“The Matthew Shepard Foundation is very active in this administration, and has not given up the fight despite how desperate it seems at times,” Kemnitz said.

Another issue of national significance that professionals of the LGBT Bar Association and affiliates strive to tackle is the upcoming Supreme Court case concerning employment rights for transgender people.

“Just think about the cruelty of this hostile administration targeting the most vulnerable at the most vulnerable time in their lives when they’re students,” Kemnitz said adamantly. “I’ve been working diligently with our amazing Chief Programming Officer Judi O’Kelley to make sure there’s lots of programming for some of the older attorneys who may not be as well exposed to transgender issues as they need to be.”

In the legal world, there is a much slower process of adopting LGBT-conscious emotional intelligence than the change that may occur in the general community, Dougherty explained.

“You still have a lot of misunderstandings and probably unconscious bias,” Dougherty said.

“Not only when it comes to facing LGBTQ populations, but any person of any ethnic minority and women do face challenges just because they’re not taking into account how things change.”

Though institutionalized cultural change may be slow to manifest, LGBTQ law professionals are working hard to educate their peers and work toward fostering more accepting, inclusive work environments.

“To some extent, the hope is that there really isn’t a distinction between the rights anyone else has in a firm or a practice,” Vandermark said. “Whether you’re in-house or sitting as a state court judge, that eventually we get to a place where there aren’t any distinctions.”

LavLaw’s Career Fair will take place on Friday, Aug. 9. In the 30 years the conference has been running, it used to only attract the attention of the top 100 largest law firms worldwide as ranked by the magazine American Lawyer, or the Am Law 100. This year, representatives from firms ranked within Am Law 101 to 150 will be attending the conference, Kemnitz said.

“Law students need to be aware that these firms are very much looking for the best and the brightest coming out of class,” she said. “You don’t have to be number one or two out of Harvard or Yale, what you need to be is somebody who is interested in that firm for a particular reason.”

Kemnitz encourages law students to do their homework and determine which firm they want to work with and why they would be a good fit professionally and culturally. She feels it is important to cultivate those relationships as early as possible.

“We feel the best way to beat out all of the bad judicial nominations is to come up with our own crop of students who will someday be that next judiciary,” Kemnitz said.

LavLaw will take place in Washington D.C. next year, LA the year after and will then return to New York in 2022.

“Next year we’re in D.C. for an election year,” Kemnitz said. “And we’re expecting some change.”