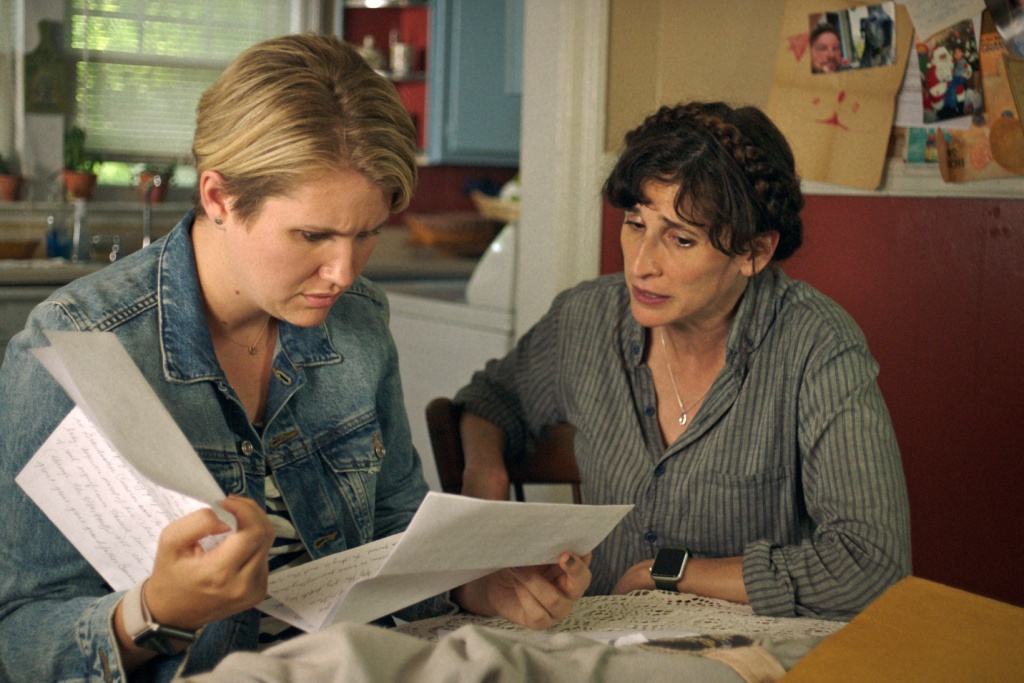 The film, opening July 26 at the Ritz at the Bourse, is talky, but humor comes from Shelton’s amusing characters, sly dialogue and surreal situations.

The story starts with Mel (Marc Maron), owner of a pawnshop in Birmingham, Ala. He is a seasoned negotiator, unlike his assistant, Nathaniel (Jon Bass), whose only skills are his dexterity with a cell phone and being annoying.

One day, Cynthia and girlfriend Mary enter the shop looking to sell an antique sword that comes with an authenticity certificate and documents suggesting it was used in a Civil War battle that proves the South won the war.

Regardless of whether the women — or Mel — believe this to be true, the item is in demand by “truthers” who collect such “high-quality prover” artifacts. Soon, Nathaniel is sending photographs of the sword to interested parties who are offering tens of thousands of dollars for the relic.

“Sword of Trust” has considerable fun with this basic premise. The story that Cynthia’s deceased grandfather recounted in a letter has a number of continuity errors; for starters, confusing General Sherman with General Sheridan and the exact number of men who died in the battle where the North allegedly surrendered.

The film generates chuckles as this narrative is told and retold by different characters at various times. It becomes a game of whisper down the lane.

Witty exchanges are common, like one involving geography: Two men looking for the sword, Jake (Whitmer Thomas) and Zeke (Timothy Paul), ask Mel if he’s from the South. “The Southwest,” the New Mexican Mel responds, much to their chagrin, setting off repartee about regionalism and “The East” that leads to some not-so-funny antisemitic sentiments.

“Sword of Trust” also mines humor from Mary’s sarcasm and tone. She’s not one to be played with, and while she needs Mel to help sell the sword, she also likes to be in control — even if it means posing as Mel’s wife so as not to upset the delicate sensitivities of the racist and likely homophobic men they’re hoping will buy the relic.

Yet the film doesn’t bury the truth of Cynthia and Mary’s relationship. A scene in a van where Nathaniel asks the women how they met prompts a funny story that fleshes out the characters, their thoughts about starting a family, Mary’s anger and Cynthia’s dream job. It’s a sweet moment in a film that, while naturalistic, pivots on an absurd idea and sitcom-like plotting. The film remains engaging due to the simplicity of the characters and the narrative. Shelton humanizes her protagonists, revealing who they are based on what they believe.

The film opens with Nathaniel watching a video that advises, “Question things around you” — which he does, albeit incorrectly. (He thinks he has a chance, romantically, with Cynthia.) And while Mel can convince a pawnshop customer his “junk” is worth only $100, he has trouble believing what his ex, Deirdre (Shelton), tells him about her bad luck.

Other characters claim they have seen a ghost or believe the world is flat or take issue with the idea that President Abraham Lincoln was gay. There is an amiable quality to these musings, and Shelton makes light of these topics without issuing judgment.

The uniformly strong performances go a long way in making the characters convincing. Maron is terrific as Mel, a world-weary man who possesses a con-artist’s heart but is wary about what people tell him. When he tells a story about his relationship with Deirdre, it is heartfelt and moving.

Watkins is perfectly cast as the likable, no-nonsense Mary, who admits she’s excited to meet the “truthers” up close. In support, Bell is goofily charming as Cynthia, whose head is in the clouds, and Bass exhibits masterful comic timing and pricelessly funny expressions as the knuckle-headed Nathaniel.

Even the supporting actors are hilarious, especially Dan Bakkedahl as “The Boss,” one of the potential buyers of the sword. Bakkedahl turns a tense encounter into something downright surreal as Mel and Mary keep having to recalibrate his every mood swing. The film also features a droll turn by Al Elliott as Jimmy, who always seems to stop by Mel’s pawnshop at the appropriate time.

“Sword of Trust” is low-key comedy, but the offbeat characters and their strong rapport yield considerable delight.