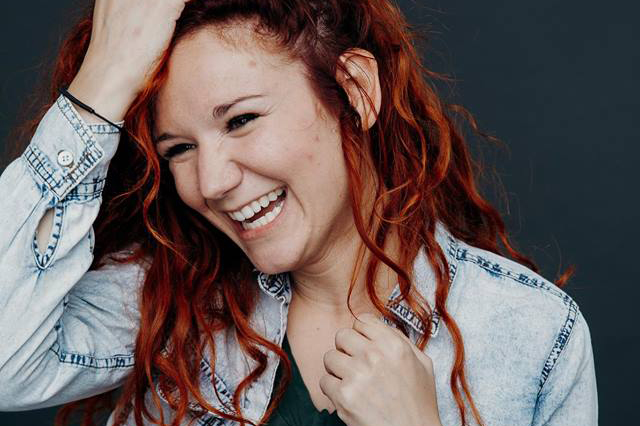 “Part of why I ever wanted to be an actor was because of actors like him,” said the South Philly-based queer performer, a veteran of more than two-dozen local productions. “He took chances and wasn’t afraid to be weird, and I was drawn to that.”

Kuerzi even dressed up as Depp one Halloween. So did out local playwright Val Dunn. That childhood revelation, along with their shared adoration, prompted the pair to create “Johnny Depp: A Retrospective on Late-Stage Capitalism,” in which Kuerzi portrays the Oscar-nominated movie star. After two successful runs in Philly, the show is traveling overseas as part of the legendary Edinburgh International Festival Fringe.

In recent years, Depp’s notoriously extravagant lifestyle – which includes a purported $30,000-a-month wine habit – has largely overshadowed his film career. Kuerzi and Dunn conceived of their project as both an homage to a star and as “an examination of how his relationship to money came to be.”

“Johnny Depp: A Retrospective on Late-Stage Capitalism” found its first audience as part of the inaugural Philly Theatre Week, an initiative launched by Theatre Philadelphia to promote the local arts scene. “We signed up for Philly Theatre Week with nothing but a title, just to give ourselves a deadline,” Kuerzi said.

The result was a 45-minute performance piece described as “part ritual and part drunken sing-along,” staged in Dunn’s West Philly living room. “The audience was handed a goody bag when they walked in, and they were encouraged to interact in a way that’s different from most ‘interactive’ shows,” Kuerzi said. “The game is that you throw a penny at the stage whenever you’ve seen one of Depp’s movies. Whoever, like Johnny, recklessly throws the most gold at the shrine of Depp gets a prize at the end of the show. As a result, we’ve had some very invested audience members.”

The event proved so popular that Kuerzi and Dunn flirted with the idea of extending the run. “We made a party,” Kuerzi said.

In June, they revived the piece as part of SoLow Fest, a long-running do-it-yourself performance festival. This time, performances took place at Fergie’s Pub in Center City.

It was during the SoLow Fest run that local playwright Jacqueline Goldfinger suggested the pair might take the show to Edinburgh. “We applied on a whim, were accepted, and decided to go forward and do it – because why not?” Kuerzi said. “When you’re not being produced or hired that often in Philly, you might as well make some moves elsewhere.”

The Edinburgh International Festival Fringe spans nearly the full month of August, with upwards of 3,000 shows presented under its banner. “Johnny Depp: A Retrospective on Late-Stage Capitalism” will run daily from Aug. 1-10. It’s being presented as part of the “Free Fringe,” which offers gratis performance spaces and promotion to shows that agree not to charge for tickets. Kuerzi described the pre-planning as “exhausting” but rewarding.

“Most shows going overseas are either one-person endeavors or they have a media army behind them,” she said. “I’ve also never self-produced before, so this whole experiment has been eye-opening. I sent out 106 press release emails, with very real expectations that nobody might show up.”

Although “Johnny Depp: A Retrospective on Late-Stage Capitalism” is, in many ways, a love letter to its subject, there is one elephant in the room: allegations of spousal abuse against Depp made by his now ex-wife, Amber Heard. Although the show does not address the issue directly, Kuerzi understands that it’s part of the conversation.

“I find myself constantly thinking in the gray area, which is a little alienating in a ‘right or wrong’ world, and I run toward messy characters,” Kuerzi said.

Kuerzi noted that very few audience members have reacted negatively to the show’s portrayal of Depp during the two Philly runs.

“Any ‘backlash’ we’ve received has happened in the room, and it’s easy to reroute that into a positive conversation,” she said. “Most people respond very candidly, and I improvise around that.

“It’s my goal to make you fall in love with Johnny the way most of us did, and then trick you into thinking about the shitty things he’s done to himself and others.”