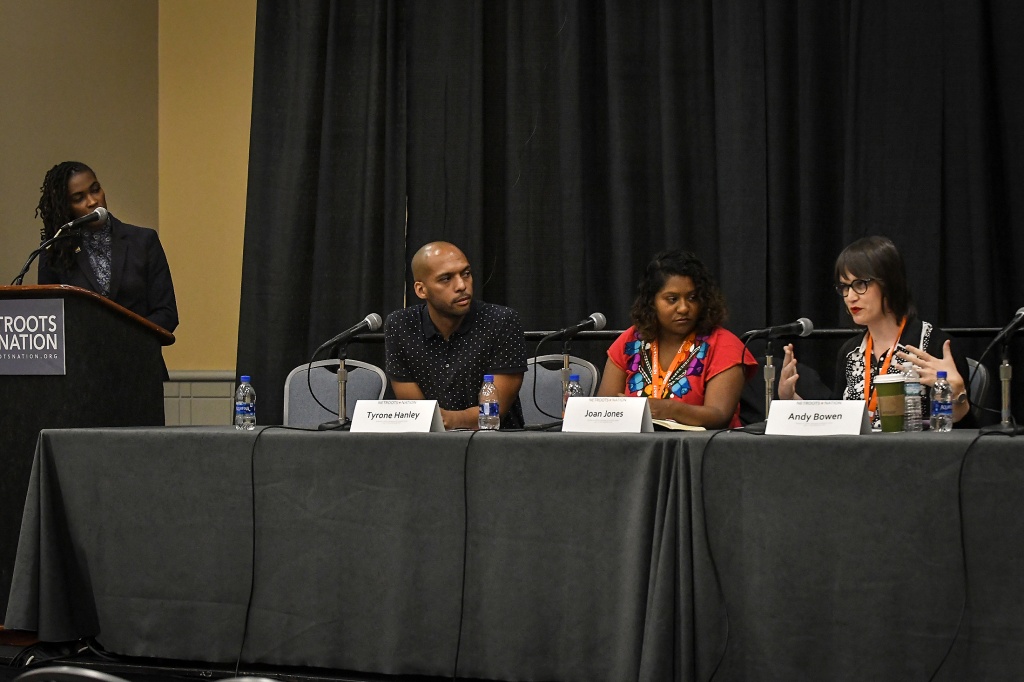 About 20 people from across the country gathered Thursday to discuss the importance and how-tos of creating a national LGBTQ movement for economic justice.

The talk, “Building an LGBTQ-plus Movement for Economic Justice,” was part of Netroots Nation, a progressive political action convention held at the Pennsylvania Convention Center July 11-13. LGBTQ rights activists Joan Jones, Tyrone Hanley and Andy Bowen made up the panel, which Executive Director of the Office of LGBT Affairs Amber Hikes moderated.

Netroots Nation is an annual conference that has taken place across the country since 2014. The Philadelphia edition drew its largest crowds ever with more than 3,700 registered attendees on the first day.

“At the core of the conversation we’re having this morning is the importance of using the radical intersectional lens as we interrogate leaders of oppression and how they impact marginalized groups, specifically LGBTQ people and those experiencing poverty,” Hikes said Thursday.

Hanley, senior policy counsel at the National Center for Lesbian Rights, said he experienced firsthand the “harshness of growing up in poverty.” He was raised by a black lesbian who worked fulltime for low wages and his family used programs including cash assistance, public housing, food stamps and Medicaid.

“We don’t have enough people who come from a background like I do doing anti-poverty work,” Hanley told attendees. “It’s really important because only as someone who has lived in poverty can you fully understand it. Not from an academic, theoretical standpoint, but from an emotional, mental standpoint.”

More than one in four LGBTQ individuals — approximately 2.4 million people — can’t afford to feed themselves and their families, compared to 18 percent of non-queer-identifying people, according to a March 2018 report from the LGBTQ Poverty Collaborative. The impacts of economic injustice are often experienced even more harshly by LGBTQ people of color, Hanley said.

Jones, founder and acting executive director of The National LGBTQ Workers Center, stressed that those who make change for the LGBTQ community don’t have to be lawyers, citing the everyday people who fought for marriage equality.

She implored attendees to take “power into our own hands. Only when we do that are we going to have a policy that really works for folks because … it’s going to be the low-income LGBTQ people and the queer trans people of color who are actually affected.”

For Bowen, principal at Bowen Public Affairs Consulting, the LGBTQ movement’s tendency to shy away from addressing economic injustice issues shows “the big banner things that we focus on, they’re a little out of whack.”

The steps that need to be taken to address LGBTQ economic inequality include using government funding to create LGBTQ-oriented social programs, pushing philanthropists in the queer movement to support on-the-ground service providers and uplifting political advocacy that distributes resources to the community, said Bowen, a queer trans woman.

The panel ended with a Q&A portion, where attendees asked questions including how to successfully build coalitions with corporations and bring LGBTQ people of color to the forefront of the social movement.

“I learned way more about what specifically within the economic justice space you can do as an organizer and what the focus should be for specific communities,” Marks added.

Quinn Gormley, a transgender rights organizer who traveled from Maine to attend the conference, said the importance of discussing economic justice lies in analyzing who is doing LGBTQ-focused work and who it impacts.

“It’s a problem in queer rights organizing where our default is middle class and economic justice organizing work often is white and cisgender and straight,” she said. “And yet we know that’s not who’s most impacted.”

This year’s Netroots Nation boasted its most diverse group of speakers to date, according to event materials. People of color accounted for 76 percent of lecturers, while 64 percent were women and 28 percent identified as LGBTQ.

During a keynote address on the conference’s opening night, Alicia Garza, co-founder of the Black Lives Matter movement, emphasized the importance of including black communities in progressive movements. Black communities’ concerns and dreams are often addressed “symbolically, but not substantively,” she said.