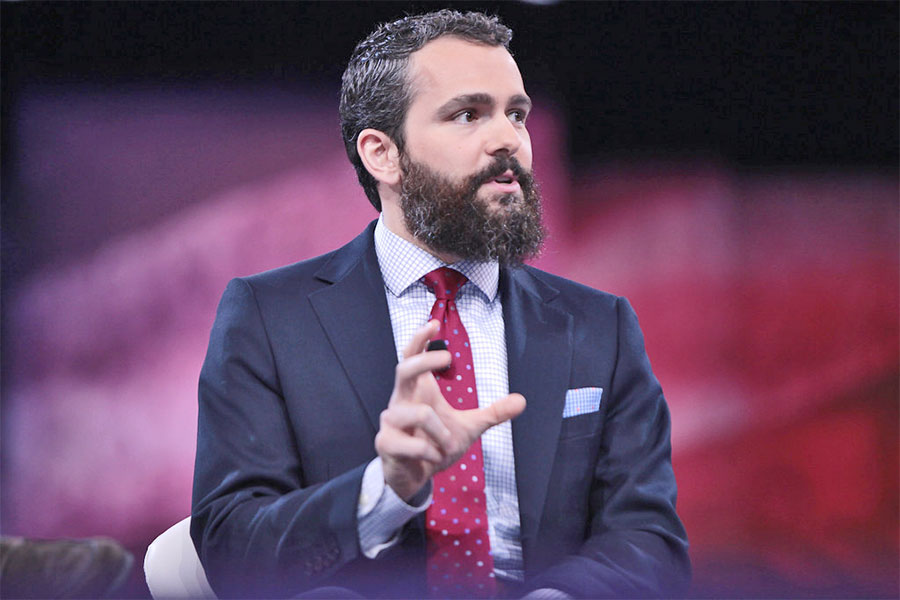 The U.S. government is locking children in cages and refusing to give them soap or toothpaste, but for some folks, the most pressing issue is the fact that my wife and I are legally married.

So, let’s talk about Ryan T. Anderson, shall we? He’s a research fellow at The Heritage Foundation, a group that really doesn’t like LGBTQ people or immigrants for that matter. Funny how so much hatred overlaps. Not “ha ha” funny, but “kids sleeping in their own waste on cement floors with aluminum blankets” funny — aka not funny at all.

Anderson’s argument is, essentially, any view of marriage that includes same-sex couples is “primarily about an intense emotional union: a romantic, caregiving union of consenting adults.”

This view, he writes, “simply fails as a theory of marriage because it cannot explain any of the historical marital norms” such as “monogamy, exclusivity and permanence” as well as “what interest the government has in it.”

In other words, why would two people of the same sex, who can’t even make babies with their privates, want to commit to and have sex with only one person forever? And why should their commitments to each other be legal?

As far as same-sex unions go, Anderson doesn’t see why we should get the government involved.

“If marriage is just about the love lives of consenting adults, let’s get the state out of their bedrooms,” he writes. “And yet those who supported the redefinition of marriage wanted to put the government into more bedrooms.”

First of all, marriage, even a definition that includes same-sex couples, isn’t just about the love lives of consenting adults. Second, assuming Anderson is heterosexual and engages in consensual sex, he’s never had his sex life policed by the state. He didn’t have the Supreme Court rule in 1986 that consenting adults of the same sex had no right to engage in sex with each other, even in private. This was, thankfully, struck down in 2003, but that was 17 long years later.

So his claim that fighting for legally recognized marriage is akin to inviting the government into “more bedrooms” is insulting and ignores a lot of painful history.

Also, let’s talk about “historical marital norms,” since Anderson thinks they’re so important. What marriage is has changed a lot over time, so it’s not clear what “historical” norms Anderson wants to get back to. Should we go back to when women were essentially their husband’s property? How about when husbands could rape their wives with impunity? How about when women needed their husband’s signature to get a credit card or a loan?

I just watched “RBG,” a documentary about Ruth Bader Ginsburg, and it is fresh in my mind that Ginsburg fought against discrimination on the basis of sex and that there were hundreds of laws on the books that related women to second-class citizens. And women are still, today, fighting for the right to control their bodies and make their own decisions about their reproductive lives.

But Anderson doesn’t see progress when he looks at the history of marriage. He sees only a cesspool of sin.

“Long before there was a debate about same-sex anything, heterosexuals bought into a liberal ideology about sexuality that makes a mess of marriage,” he writes. “Cohabitation, no-fault divorce, extramarital sex, non-marital childbearing, pornography and the hook-up culture all contributed to the breakdown of the marriage culture.”

Sure, maybe the fact that unmarried people have sex with each other and/or live together is what hurt “marriage culture.” Or maybe, just maybe, it was the way women have been historically strangled by the patriarchy that saw marriage as a man’s control over a woman rather than two adults who love each other as equals.

I am reminded of an interview I did with my maternal grandparents when they were around 70 years old for a history project in college. They described the 1950s as “a kinder, gentler time.” And maybe it was for a white upper-middle-class man and woman, but you have to ignore a hell of a lot of ugly history to believe that.

So perhaps Anderson’s “historical norms” are his “kinder, gentler time.” A time that only exists when you discard what doesn’t fit your definition of normal.

My marriage to my wife? Legal recognition changed our lives for the better. We’ve been together since 1997. That’s a lot of history, and it’s very normal.

You know what’s not normal? Putting kids in concentration camps. Please donate to the Refugee and Immigrant Center for Education and Legal Services at www.raicestexas.org.