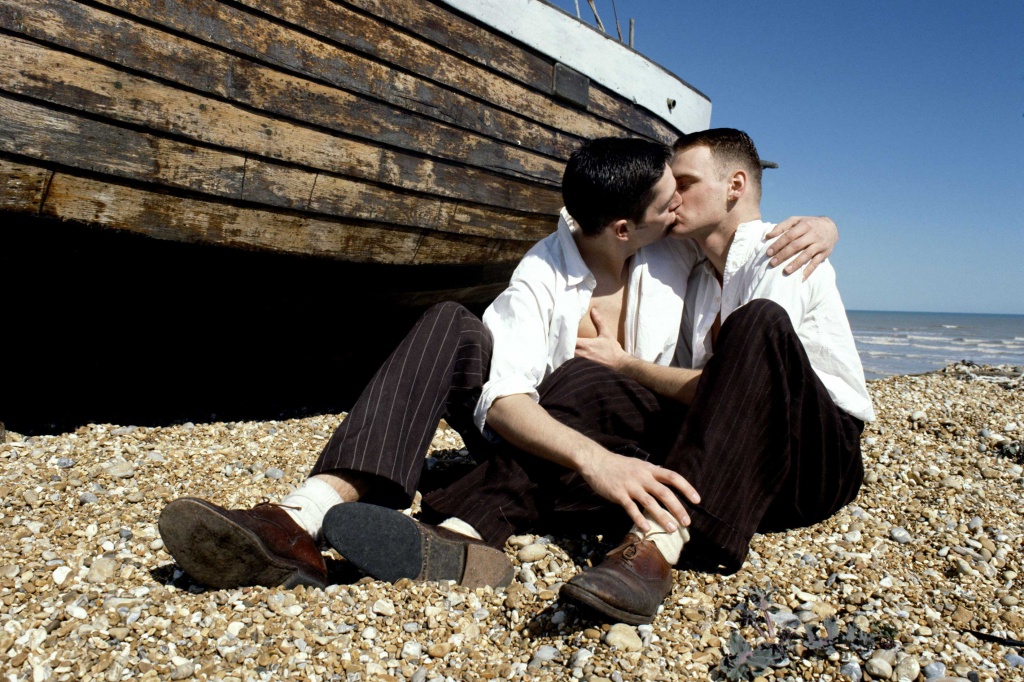 The late, iconic gay British filmmaker Derek Jarman made distinctive films that challenged viewers as much as they provoked censors and tweaked the establishment.

On July 13, at 7 p.m., the Lightbox Film Center, 3701 Chestnut Street, is screening a 2K restoration of the director’s 1990 feature, “The Garden,” — a glorious tone poem, a polemic made during the height of the AIDS crisis and an impressionistic meditation that, as the opening voiceover states, “offers a journey without direction.”

Mostly wordless and plotless, “The Garden” is spellbinding throughout. Shot on Super-8, 16mm, and video, the film is both raw and sensual. Pleasure comes as vivid images wash across the screen and the audience. Viewers can bask in the texture of reflective water scenes or be haunted by episodes lit entirely by candlelight or flares. Luminous shots of the sky and clouds are filmed in sped-up or time-lapse photography. The musical score ranges from a Russian church choir to a drag queen lip-syncing “Think Pink” — a dazzling sequence where Jarman projects scenes of gay protesters in the background.

“The Garden” follows two handsome, unnamed gay lovers (Kevin Collins and Johnny Mills) — a kind of Adam and Steve, perhaps, with the titular Garden being Eden. They are seen kissing and caressing early on and their affection is tender and palpable as they bathe in an outdoor tub. This sequence is juxtaposed with another homoerotic vignette featuring a sexy, shirtless man getting washed; but his identity and story are limited to only glimpses — as if Jarman is teasing viewers.

As the film progresses the lovers encounter Christ (Roger Cook) in one scene, while another episode involves a trio of men dressed in Santa suits singing carols as the guys lie snuggled together in a bed outdoors. All of this bliss is short lived as eventually the lovers are punished in extended episodes that involves them first being bound and gagged and tarred and feathered and then strung up and beaten.

Jarman looks to generate emotions from viewers. The director makes very clear points about religion and how the LGBTQ community has been poorly treated, especially during the AIDS crisis. Jarman’s anger stems from his own HIV-positive diagnosis two years before this film was released; he died in 1994. Another sequence of homophobic violence involves a drag queen being attacked.

Much of “The Garden” involves scenes that allow viewers to create their own meaning. Numerous images entrance, enchant or disturb. One sequence involves 12 female apostles sitting at a table a la “The Last Supper” creating sounds from glasses filled with water, against a rear projection backdrop. One scene shows a woman (Tilda Swinton, Jarman’s muse) being chased by photographers; Swinton shows up throughout the film as a religious Madonna. And then there is a truly bizarre episode involving Judas, dressed in leather, hanging from a noose with his bloody tongue out selling credit cards. Irreverent? Yes! Pretentious? Perhaps. But also, pure Jarman.

The director positions himself in the film — Jarman in nature, in his Dungeness garden and several shots of him lying — sometimes naked, sometimes covered with a sheet — in a bed positioned in the sand at the edge of the ocean as a handful of shirtless men and women dance around him with flares. These moments add a layer of depth and poignancy to the work. For fans of the director, it is like looking through an old photo album and seeing a friend from the past.

“The Garden” is a heady mix of sadness and fury, from the elegiac score to a scene of Swinton screaming. Lyrical images of gardens and fields represent growth and nature. Some scenes suggest sadomasochism, while others offer highly stylized sequences, such as an overheated episode in a sauna where the lovers embrace and a fantastical, wondrous scene involving Christ and naked men on a hillside hidden by smoke and illuminated by flares.

“The Garden” is left open to interpretation — but that should encourage, not prevent, anyone from going to see it.