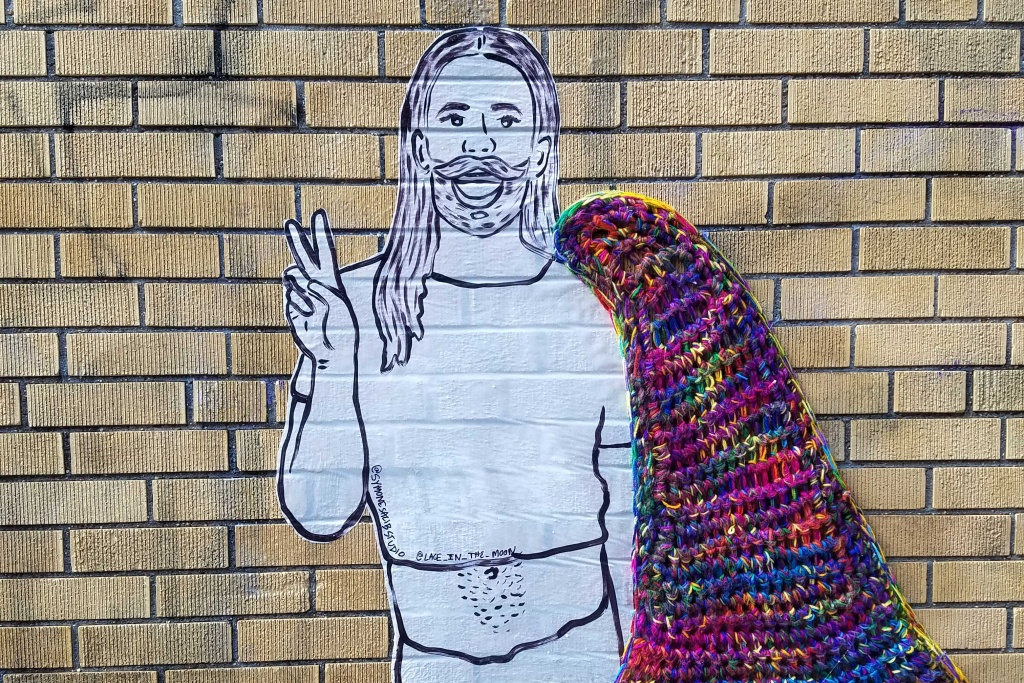 Two local artists have extended Pride Month into July by creating a “Queer Eye” artistic scavenger hunt throughout the city.

The “Fab Five” are coming to Philadelphia for the show’s fifth season. Berk has shared Salib and Nikolich’s artistic rendering of him on Instagram July 1, bringing attention.

Brown’s depiction is somewhere near the house in which he lived when he first achieved fame, on “The Real World Philadelphia.” Porowski can be found along the 1300 block of South Street; Berk is at 38th Street and Lancaster Avenue; France is at the intersection of Frankford Avenue and Belgrade Street; and Van Ness is near the intersection of 10th and Manning streets.

“We decided we wanted to extend the Pride celebration,” said Nikolich, whose art includes crochet. “Pride was really big this year, but there was a backlash about corporations and exploitation of the rainbow flag and LGBT rights. We thought that announcing this on the last day of Pride shows an all-year-round celebration of Pride instead of [just] throughout the month of June. Then we wanted to create a scavenger hunt to get people in Philly involved and outside during the month of July.”

Salib, a painter, said the hunt’s connection to “Queer Eye” was inspired by the artists’ personal experiences as transplants who quickly felt at home in Philadelphia.

Both artists said that part of the fun of creating an artistic scavenger hunt was knowing it’s only temporary.

“It’s not going to last long. Just have fun with it. That’s how I approach art, anyway,” said Nikolich. “We’re going to create this. It doesn’t have to be perfect.”

Added Salib: “That’s what’s beautiful about it — knowing that only a few people or a few-hundred people get to interact with it.”

“It also creates a sense of urgency,” Nikolich said. “Get out there and see it while you can.”

The artists hope that participants and spectators will enjoy both the installations and the hunt.

“With all art, you can make it with your own intention,” Salib said. “Whatever you make, people are going to look at it and interpret it in their own way, however they see fit. It can be anything. It can open their eyes or it can be a playful part of their day. You can walk down the street and it will change their entire vibe.”

For more information on the installations and artists, visit Instagram: @symonesalibstudio and @lace_in_the_moon.