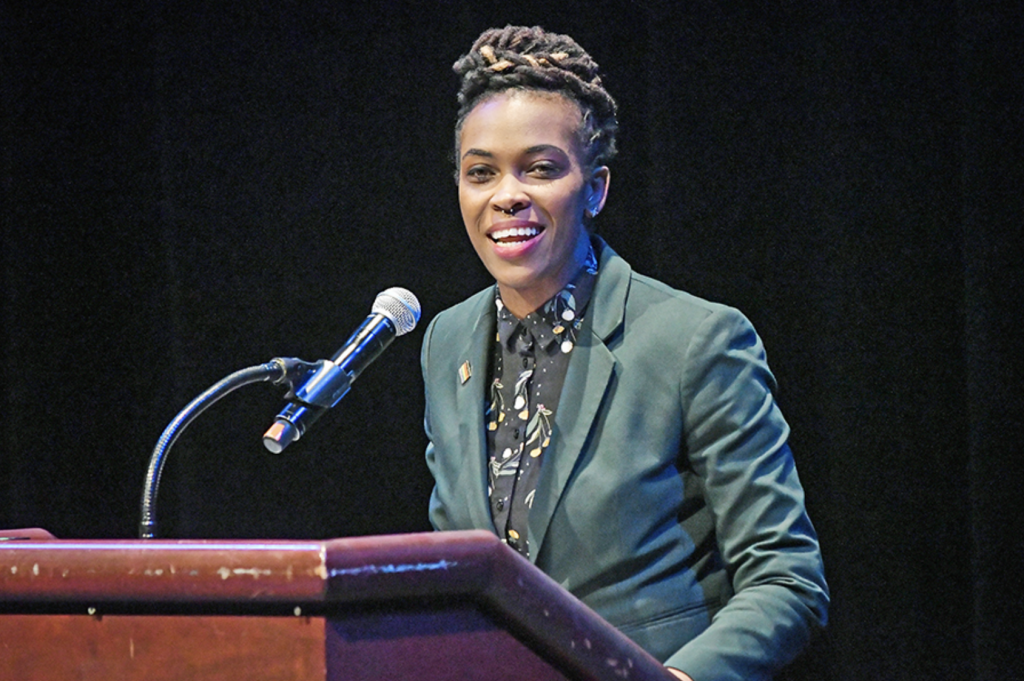 Amber Hikes, executive director of the City’s Office of LGBT Affairs, will leave her position July 31, drawing her two-year tenure to a close, the Mayor’s Office announced Tuesday.

Mayor Jim Kenney accepted Hikes’ resignation earlier in the day. Kenney appointed Hikes to lead the office in March 2017. Hikes said details of her next steps will be revealed next week, and declined to share whether she’ll remain in Philadelphia.

During the interim between Hikes’ departure and the hiring of her replacement, senior staff from the City’s Office of the Chief Diversity and Inclusion Officer will take point on the Office of LGBT Affairs’ daily duties.

In a statement, Hikes said it “has been an absolute honor” to serve Philadelphia’s LGBTQ community and she is “in awe of what we’ve created, healed and instituted in the last two years.”

“None of this could have been done without the support and participation of my fellow LGBTQ siblings and, of course, a willingness to push for change from within the administration,” she added. “Together, we have moved the office from a local policy shop to a formidable force for change. I am grateful for my experience with the Kenney administration, and look forward to seeing the continued progress of our city when it comes to advancing the rights, protections and celebration of Philadelphia’s LGBTQ community.”

While serving as executive director, Hikes led the charge on several initiatives aimed at strengthening inclusion and intersectionality in the LGBTQ community.

Recently, Hikes worked with the Philadelphia Police Department to develop a trans-inclusive policy — heralded as one of the most progressive in the United States — that was announced last month.

Shortly after taking office in 2017, Hikes introduced Philadelphia’s “More Color, More Pride” flag, which added black and brown stripes to the design to represent the LGBTQ people of color who have experienced marginalization in the community. She also launched Philadelphia’s annual LGBTQ State of the Union, pushed for gender-neutral language updates in the Philadelphia Home Rule Charter and started the LGBTQ Community Leadership Pipeline, which diversifies the leadership of the city’s LGBTQ nonprofits.

Kenney said in a statement that he accepted Hikes’ resignation with mixed emotions.

“Amber has been a fearless advocate and public servant, working tirelessly to support Philadelphia’s LGBTQ community from within city government for the past two years,” he added. “She has also been a critical sounding board on issues of diversity and inclusion spanning across numerous marginalized communities. We will miss having Amber’s voice, perspective and passion inside City Hall, but her impact on the city will be felt for years to come.”

On Facebook, Hikes said her resignation stems from a mixture of “personal survival” and “sustaining and building” the LGBTQ movement.

“I did this job with every ounce of myself and those close to me know the toll this work has taken – mentally, emotionally and physically,” Hikes wrote. “While that was my conscious sacrifice, this kind of endless dedication to our work is neither healthy nor sustainable. I believe deeply that strong leadership looks like answering the call when it’s necessary and knowing when to step aside when the time has come to pass the torch. That time is now. I leave to care for my own mind, body and heart and I do so with great pride, gratitude and peace.”

In an interview with PGN, Hikes reiterated the role self-care played in her decision.

“It’s not necessarily a cautionary tale but … we have to do a better job of taking care of ourselves in movement work so that we can show up in the most effective way in the work that we’re doing,” she said.

As the Office of LGBT Affairs goes on in Hikes’ absence, she said she hopes it continues to focus on coalition building and representing members of marginalized communities within the city’s LGBTQ population, including immigrants, people with disabilities, people living in poverty, those living with HIV, people of color and trans people.

A graduate of the University of Delaware and University of Pennsylvania, Hikes was hired to the Office of LGBT Affairs after dedicating eight years to college access work for low-income students of color. One of the greatest challenges of the executive director role was seeing how many challenges still existed after entering the realm of City Hall, like finding resources or support and navigating bureaucracy, Hikes said.

“The biggest challenge was being able to navigate with those very limited resources and navigate with a community that was frankly kind of actively in crisis and really struggling with some serious historical trauma,” she added, noting she felt her team navigated the hardships as best as possible.

Reflecting on her time in the office, Hikes said she’s most proud of the international visibility stemming from Philadelphia’s inclusive Pride flag, the leadership pipeline initiative and the LGBTQ State of the Union — projects she feels are “really going to resonate with folks for years to come.”

But, Hikes said, as gratified as she is with what the office accomplished under her leadership, her dream is for all City agencies and departments to have an LGBTQ liaison to offer support to LGBTQ employees, and to train every City employee on working with the community — ventures she hopes her successor will execute.

“It was truly the greatest honor to be able to serve this community in this capacity during this incredibly challenging time for our community’s history, our city’s history and our country’s history,” Hikes told PGN.