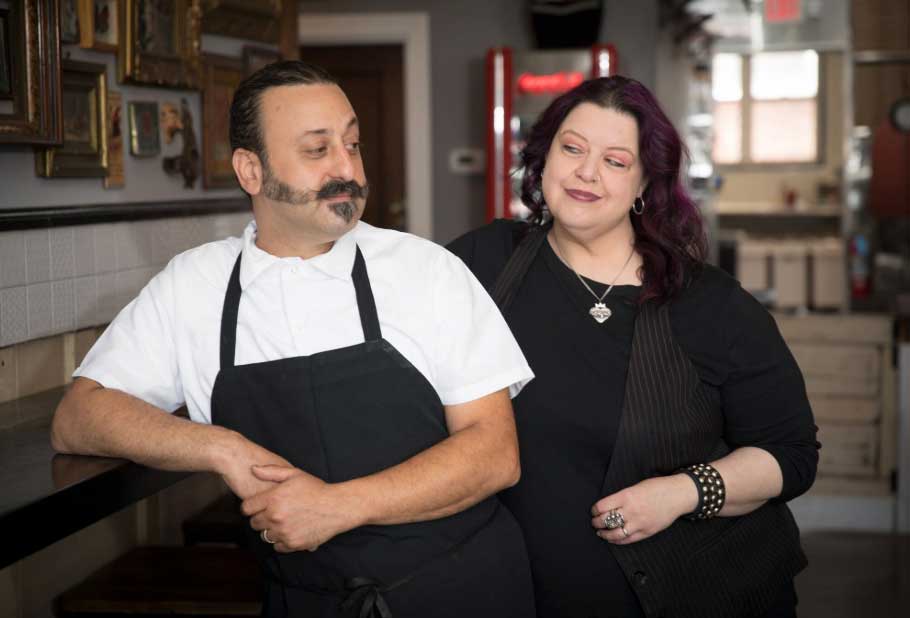 Culinary art and activism can make for a successful marriage.

Just ask Bobby Saritsoglou and Christina Kallas-Saritsoglou, the couple behind South Philly’s Mediterranean BYO-with-a-cause — open barely a month and already in demand for diners, and which already gathered $1,000 for a local charity.

Stina Pizzeria has quickly become the culinary heart of South Philly’s Newbold, winning the hearts and tastebuds of the neighborhood’s hipster habitués, millennial marrieds and beyond.

With charity that depends on sales, Stina’s popularity bodes well for Philly’s nonprofits.

“The concept is something casual and fun and affordable, for this neighborhood — of which there is nothing like this in our area,” said Saritsoglou, a chef whose kitchen credits include the white-linen Will, Opa, Santucci’s Pizza, Ansill and Django.

But Stina is all his, and he wants to give back to the community.

The casual eatery will “raise money every single day for the charity or organization of the month,” he said, with 1 percent of daily sales and 20 percent of sales on the last Tuesday of the month going to local nonprofits.

“The neighborhood is where we live. And the name is my heart,” said Saritsoglou, who calls his wife by the nickname “Stina.”

Kallas-Saritsoglou is also the heart of Philly AIDS-related charities. She cofounded the nonprofit Philly AIDS Thrift, which opened its original Fifth and Bainbridge location in 2005 and, five years ago, acquired a second location at the iconic Giovanni’s Room at 12th and Pine, which is historically distinct as the oldest LGBT bookstore in the United States.

PAT also was the first retailer in the city to open its own in-store HIV-testing center, and has raised more than $2.5 million and counting for local AIDS charities.

Although Kallas-Saritsoglou runs the counter at Stina when she can — and she also decorated the 28-seat, 900-square-foot space, using oblong vintage art and fun tchotchkes — she said PAT remains her priority.

“In 2005, it was me and a few friends who put the store together after having grown up as a teenager at a time when AIDS devastated the community. We watched too many friends die and other friends continuing to live and struggle with the disease. We put it together so that we could make a difference for the HIV community.”

Stina is the perfect marriage for the chef and the activist.

“With the restaurant, we’re putting our two loves together — food and activism,” said Kallas-Saritsoglou. “Bobby’s always wanted to open his own restaurant, and I’ve always cared about trying to make a difference in the world, even if it’s tiny. He shares that love too. And I do love his cooking, especially his octopus.

“While the thrift store focuses on HIV exclusively, Stina allows us to go outside that,” she added. “[It] allows us to showcase what other people in the community are doing as activists, while also being able to include HIV organizations and charities in our mix at the restaurant.”

Saritsoglou said giving to the community was built into his business model. And early signs point to success: Stina already was able to donate $1,000 to the Southeast Asian Mutual Assistance Association Coalition (SEAMAAC) work-ready program, which prepares immigrants and refugees for employment.

And while he creates the dishes, Saritsoglou said Stina’s look and feel come from its namesake.

“The warmth, the homeyness, the crazy stuff on the wall — as well as the long-standing activism — that’s Christina. She’s loving and giving.”

With positive critical nods and an established customer base so early in the game, hopes are high for Stina’s ongoing successful partnership with the community.

At the heart of it all is a couple that believes good food pairs well with charity.