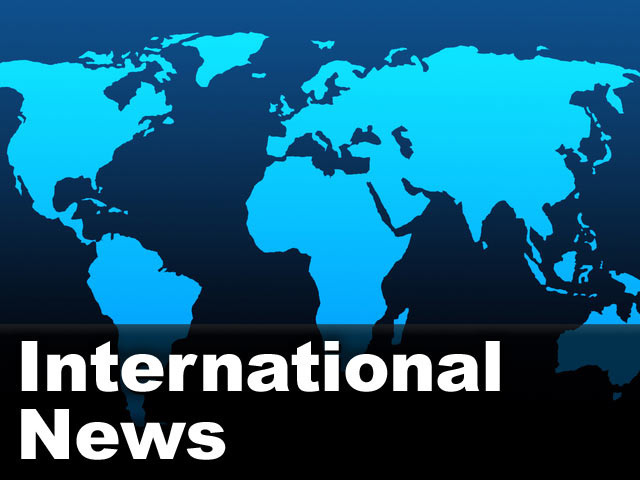 Thousands of supporters of LGBTQ rights marched through the center of Kiev, the capital of Ukraine, despite a heavy police presence trying to separate them from opponents.

Police said June 23 that nine people were arrested on suspicion of preparing provocations against participants in Kiev Pride.

Ukrainian news reports estimated there were about 2,500 marchers.

Several people protesting the march scuffled with police as the crowds assembled. Others stood along the route, shouting and holding a banner reading “Sodomy is the road to hell.”

Gay rights opponents argue homosexuality is contrary to Ukraine’s traditional culture. In turn, a large banner at the front of the Pride procession declared “our tradition is freedom.”

Aldo Ivan Davila Morales is poised to take a seat in Guatemala’s congress in January, making history as the first openly-gay man elected to the country’s legislature.

Proudly gay and living with HIV, the 41-year-old activist said the rainbow flag won’t be his only cause. He intends to begin his congressional career with three main agenda points: fighting endemic corruption, ensuring Guatemalans’ rights to healthcare and defending human rights, with a focus on the LGBTQ community.

“I’m happy, with a lot of mixed feelings,” Davila said in an interview. “The worry is I’m putting myself in a snake pit. But at the same time I’m no slouch, and I’m ready and able to fight when it needs to be done.”

While it hasn’t been officially confirmed by electoral authorities, experts said Davila’s left-wing Winaq party won four congressional seats in the June 16 general election, and he is set to represent a Guatemala City district.

“People have to see me as just another citizen, since I was elected democratically,” Davila said.

Guatemala has recently taken steps toward guaranteeing LGBTQ rights, like adopting measures to identify hate crimes against members of the community and allowing people to change their legal names and choose how they appear in photos on official IDs, which helps transpeople better express their identities.

The country larely remains a socially conservative society, though, with its dominant Roman Catholic and Protestant faiths. Prejudice and fears over HIV are deeply rooted. LGTBQ people have historically been targets of discrimination and sometimes assault, although such treatment is slowly becoming less socially acceptable.

Burundi national Nina Muregwa said she feels threatened again. After escaping death threats back home over her sexual identity, the 17-year-old thought she had found a sanctuary in Kenya. Recent incidents, however, have left her scared for her life once more.

She and other LGBT refugees allege they have been harassed by police in recent weeks in Kenya, which is a rare regional haven for the gay community and yet maintains that gay sex is illegal. It is the only East African nation where someone can seek asylum and be registered as a refugee based on their LGBT status, the United Nations refugee agency says. It is not clear how many are registered in Kenya.

Muregwa and 16 other refugees allege that five police officers arrested them at gunpoint at home and locked them up without charge earlier this month. After they were released two days later on June 10, they allege another group of police officers tried to arrest them but the U.N. refugee agency intervened.

Nairobi police chief Philip Ndolo said that the refugees were arrested for their own protection. He did not give details.

The refugees have now locked themselves in their two-bedroom house in the capital, Nairobi, saying they are too frightened to venture out even for food because of threats from local residents.

Kenyan human rights activists say they saw this coming. They had warned that a closely watched High Court ruling last month upholding the criminalization of gay sex would bring a backlash against the LGBT community. Some Kenyans would now feel emboldened to act out, even with violence, said leading gay rights activist Eric Gitari.

Gay refugees are especially vulnerable. Last month some of them protested outside the U.N. refugee agency office in Nairobi demanding more support from the agency and more respect from Kenyan authorities. In April, another group of at least 55 LGBT refugees held a sit-in protest outside the office demanding resettlement as Kenyan authorities sought to close the emergency shelter where they stayed.

Finding a safe place to live has become a challenge, some of the refugees say.