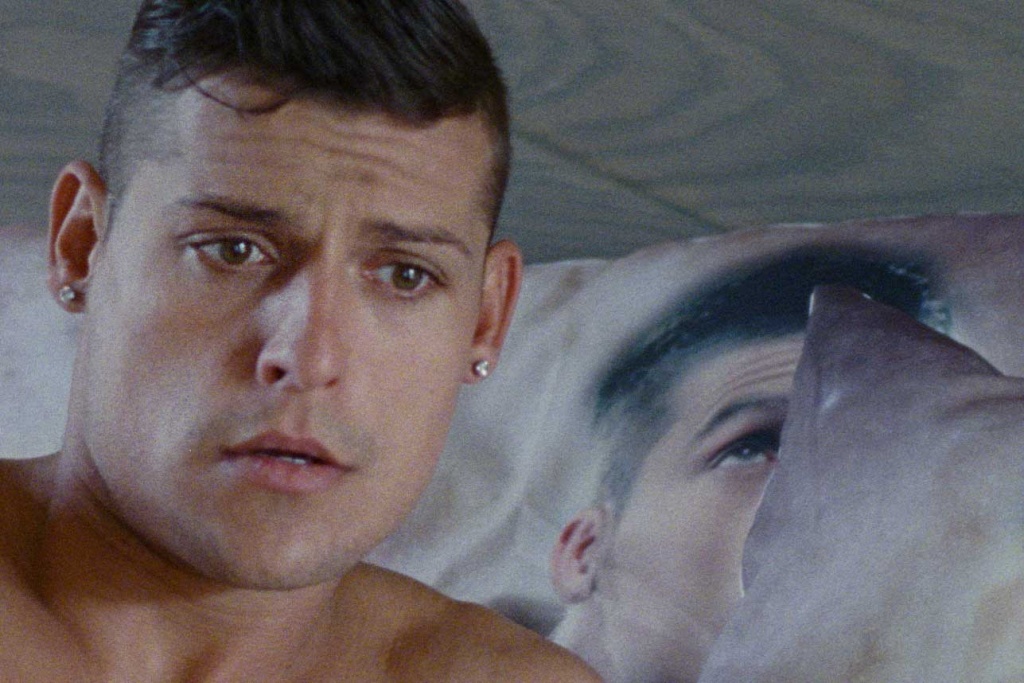 The wild Portuguese import “Diamantino,” opening June 28 at the Landmark Ritz at the Bourse, features gender-bending and genre-bending in equal measure. The title character (Carloto Cotta) is a soccer player who loses his mojo in the World Cup Final. To improve his mood, he decides to take in an African refugee, Rahim. However, Rahim is really a lesbian Secret Service agent named Aisha (Cleo Tavares) looking to investigate Diamantino’s questionable finances.

PGN spoke with writers and directors Gabriel Abrantes and Daniel Schmidt about their truly original film.

PGN: Can you explain where the crazy idea(s) for the film came from?

GA: We were captivated by this duality of super-light genre and strong political content. What’s the most twisted romantic couple? Someone pretending to be an orphan who gets adopted. We came up with the soccer star later. We were inspired by Kim Kardashian and Angelina Jolie and Madonna — all big stars who adopted. We wanted to be tongue-in-cheek and poke fun at that. So as the idea gelled together in the script, the romantic comedy/impossible love made more sense and became richer in a footballer’s world in the European theater.

PGN: Can you talk about how you present the character of Diamantino in the film?

DS: We wanted to make a film that was a fairy tale but set in the present with a contemporary, mythological figure. Because they were at the believable intersection of all the elements. Instead of lampooning them, let’s look at the alternate approach — that they aren’t exploited, but are inversely being exploited. All the visuals — memes, him on the news, or in the stadium — were to give a sense of that grandiosity, to create a mythology of character contrasted with images of him in a fragile, naive state, in his undies, crying, with his kitten.

PGN: What can you say about the play on sexuality and gender roles (that are best left to be seen)?

GA: I think we were interested in thinking of a rom-com that would push boundaries. Diamantino is like a young boy coming out of his puppy, childish world. In his heteronormative soccer world, he didn’t get the chance to think he was in the wrong body. Aisha is on a fluid sexuality and not just a lesbian.

PGN: There is a political satire at work here too. What prompted you to take on the World Cup, the EU, and other sacred cows?

DS: We were trying to take stock of everything — the surveillance state, the rise of right wing nationalism, etc. But in making the film, we wanted to play with the scandals at FIFA, the Panama Papers, and the intersection of corruption and nationalism, states and banks. Cristiano Ronaldo — one of the film’s many inspirations — his falling on the wrong side of the law with his banking happened after we finished editing.

PGN: “Diamantino” features layers upon layers, from multiple narratives, dual roles, surveillance, the media, computer hacking and even the Diamantino bed sheets the characters sleep on. Can you talk about the layering?

GA: It’s overcompensation! We say we have this huge appetite and get excited by ideas. We enjoy this crossing of a ton of storylines. That’s why we tried to do a bonkers film with 17 storylines. We simplified Diamantino’s siblings, making them evil twin stepsisters to make space for more things next to it.

DS: It’s our perspective. My mind can’t help but think in an associative fashion finding twists and unlikely pairings. We engender these setups, combining different things — soccer and adoption — it starts to multiply and becomes more multidimensional.

PGN: Can you talk about the film’s wild visuals? From the genetic testing to the giant fluffy puppies?

GA: It’s that old dictum: show don’t tell. Diamantino was supposed to be dumb, so what would be an image that shows that idea in a cute and fun way? We came up with the puppies. All the holograms are visual cues to make unbelievable things that are viable. The holograms come from “Iron Man” and “Minority Report.” “Hollow Man” was a big inspiration. We get a bunch of references from a bunch of places. We wanted the story to anchor them.

DS: It’s a mass of different themes and content. The story might be unusual, but the relationships between the elements — a lot of them are stock, like the Cinderella-esque characters or the holograms. What’s new is the way we try to suture that variety together and orchestrate them in some sort of harmony.

PGN: What do you want audiences to take away from the film?

GA: The power of naiveté; that spectator might have laughed and had enjoyment, but there’s a secret weapon: a dumb hunk has come from a naive place. It’s a proxy for the oversaturation of conflict with our news apps. There is, in our films, a love and embrace of ambiguity. There are political questions and questions of gender that are left open. It’s suggested, not a big slogan.

DS: If audiences feel stimulated, moved or amused by these collisions, that that could be generative to thinking in their day-to-day lives. Reorientation to topics that are delivered and digested by us in these compartmentalized ways — maybe there’s some freedom or benefit to shuffling the deck and seeing things in a fresh light.