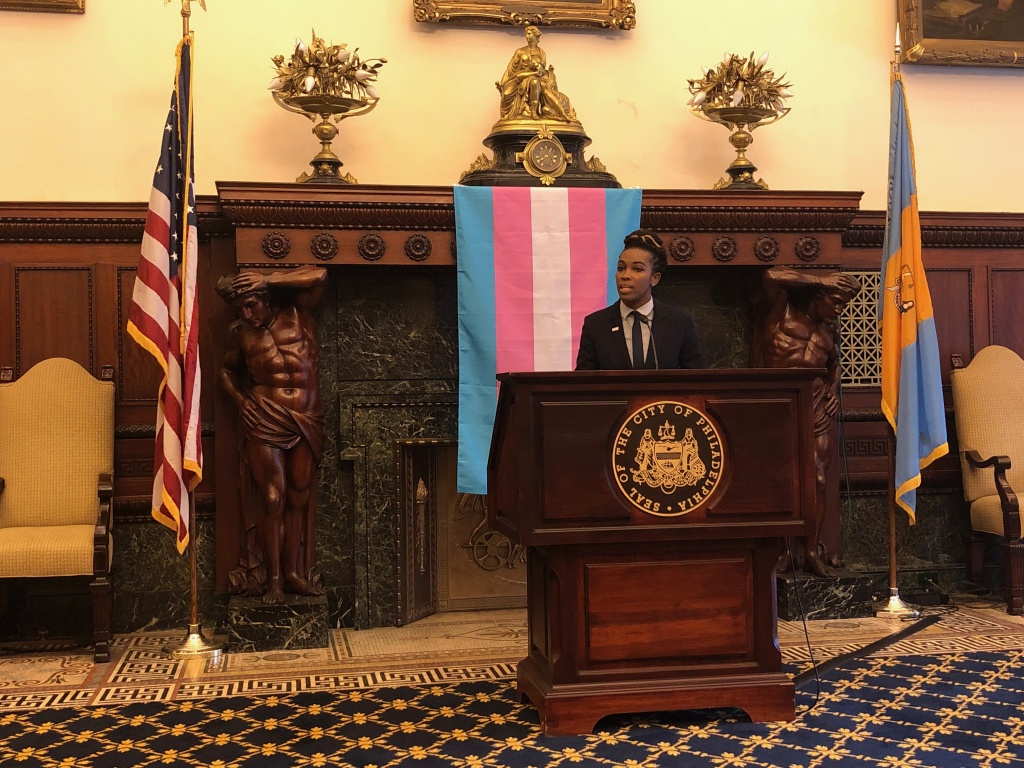 Under the new policy, Directive 4.15, officers will be required to include both a person’s chosen and legal name on paperwork, use preferred names and pronouns when interacting with and speaking to the media about transpeople, and transport transpeople in custody to the nearest medical facility for immediate needs, including hormone therapy.

The new guidelines also mandate police to transport and house transpeople in custody separately from other incarcerated individuals when possible, and to allow transpeople to choose the gender of the officer searching them.

The policy is one of the most progressive in the country and makes Philadelphia one of the few cities that addresses nonbinary people in official police measures, said Amber Hikes, executive director of the Mayor’s Office of LGBT Affairs, at a City Hall press conference. The directive took a year to develop to ensure it was not produced from “one singular lens.” Nonbinary and transgender policy interns, members of the Philadelphia Police Liaison Committee and LGBTQ attorneys and activists informed the new plan.

“For too long, our transgender and nonbinary siblings have faced humiliating, hurtful and even violent treatment during their interactions with law enforcement,” Hikes said. “While this issue is not unique to Philadelphia as a city, we are committed to continuing to address this issue head-on and alongside members of the trans, nonbinary and gender-nonconforming communities.”

Although police and city officials announced the overhauled policy this week, it took effect in March. Beforehand, police operated under Directive 152, a 2014 policy that included terms like “cross-dressers” and “transsexual.” The former policy indicated an arrested individual’s gender was denoted by what appeared on the person’s government-issued ID, except when an arrestee had undergone gender-affirming surgery. When an ID wasn’t available, police had the authority to assign gender based on genitalia.

In 2017, the Philadelphia Sheriff’s Office released its own policy mandating that inmates be processed based on the gender on their government-issued ID, but allowing them to choose to fill out a “Transgender/Gender-Variant Statement of Search” form indicating preferred name, gender identity or expression and a gender preference for the officer searching them.

“We weren’t satisfied with just writing a directive that was good enough for today, but it had to be one that would speak well for us going into tomorrow and ensure the rights of everyone and ensure that people were being properly treated,” he said.

The policy extends to all police interactions with members of the LGBTQ community, whether suspects, arrestees, victims or witnesses to a crime.

Philadelphia Managing Director Brian Abernathy said he hopes the new policy will pave the way for other municipalities across the country. Those who crafted the guidelines were “working to restore a sense of dignity and humanity for this community,” on top of trying to improve police relations with LGBTQ residents, he added.

Transgender people experience higher rates of mistreatment, abuse and violence at the hands of law enforcement in the United States. More than 57 percent of transpeople reported feeling unsafe in calling police, according to a 2015 survey from the National Center for Transgender Equality.

Newer reports indicate violent crimes against transpeople, particularly those of color, have spiked. According to the National Coalition of Anti-Violence Programs, there was a 42-percent increase in hate-violence-related homicides of transgender and nonconforming people from 2016-17. Most victims were people of color.

Deja Lynn Alvarez, trans activist and co-chair of the Philadelphia Police Liaison Committee, said she previously “suffered horrible police discrimination, bias and abuse for years,” like others in the transgender community.

“We are asking for everyone to simply understand that we are not asking for special rights or special protections,” said Alvarez, a transwoman, at the press conference. “We are asking for the same rights and same protections that are afforded to every citizen, not only in the city of Philadelphia but every city across this country and what we want for every nation around this world. The changes made today to this directive are monumental and they show how far we have come.”

The Philadelphia Department of Prisons has also instituted new options for transgender inmates. They can be placed in general population, protective custody or a “buddy” unit, which houses inmates who need help completing daily living skills. Here, inmates can work, participate in job training or pursue educational opportunities.

Officer Jo Mason, who is openly genderqueer, said when they joined the department 17 years ago they “did not think I could ever live out and open as a police officer here in Philadelphia.”

“The first policy existed and it was good, but was it good enough? Or could we do better?” Mason added. “Standing here today is proof that there are people in this department, our entire department, who believe we can keep moving forward. We can keep being the leaders when it comes to law enforcement on how we treat everybody.”