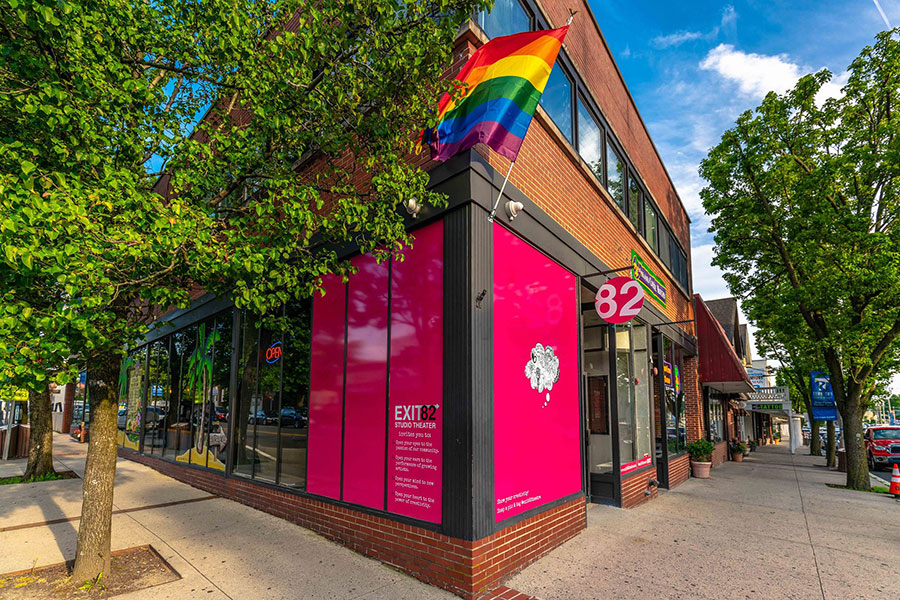 A town in Pennsylvania and one in New Jersey are exemplifying the LGBTQ-plus community’s importance by hosting first-time Pride celebrations.

The festivities are underway in Doylestown, Bucks County, and will continue through Sunday with events like karaoke, LGBTQ film screenings at County Theater and a block party on State Street, featuring live music and family-friendly activities like Paint the Rainbow Crosswalk and Drag Queen Story Time.

“I think it’s great that the Pride celebrations are extending to smaller communities as well,” said County Theater programming director Michael Kamison. “Doylestown is a historically friendly and open small-town America that has a large LGBTQ population, spearheaded by our mayor, Ron Strauss, who’s a wonderful supporter of these causes.”

“Because of the youth organizations in the area, we wanted to make it really easy for them to see queer cinema,” Kamison said.

After the “Stonewall” screening, the theater will host a panel on the progress of the LGBTQ-rights movement and what still needs work in terms of LGBT visibility and civil rights.

The festivities kick off at noon Saturday on Robbins Street and continue through the evening with live performances, family activities and local food vendors.

Cardone said the event is two-and-a-half years in the making.

“I was saying to myself every single day after [Trump] was elected, What can I do? We know theater, and we know our business, and it may not be anything as big as running for office, but it’s doing something to make a change.”

Exit 82’s Pride celebration is the impetus for a Township Council proclamation designating June 22 as “Toms River Pride Day.” On the heels of this proclamation, the Ocean County Board of Freeholders reportedly plans to declare June as Pride Month in the county.

“We were trying to think of ways to pay tribute to those who came before us from our community,” said Evan Phalon, the event’s strategic consultant. “There are calls to ask for a formal apology potentially during this opening ceremony where we’re told we’ll have a representative from Township Council and the Ocean County Freeholders. That’s something that’s important to us and that we want to get out there.”

When Cardone and Davenport officially opened Exit 82 last July, they put up a Pride flag outside the theater, at the corner of Main and Washington streets. It was the first Pride flag on display in downtown Toms River — and then their landlord took it down, claiming they needed a permit to fly it publicly.

Davenport presented the issue to city planner David Roberts, who told her there were no official rules addressing public displays of the LGBT flag in Toms River — but that he wanted to ensure the flag could be displayed without interference.

Davenport said she discovered that because President Obama declared Stonewall a national monument where the Pride flag flies, protections are recognized at the federal level. She said she presented her research to Roberts, who intends to draw up official language permitting the LGBT flag to be flown in the Township of Toms River.

“[The flag] is recognized federally as a piece of history,” Davenport said. “We were able to hang our flag back up and no one could say a word, which felt like a huge win.”

Not long after Cardone and Davenport first put up the flag, a local teenager and member of their high school’s gay-straight alliance expressed surprise at seeing an LGBT banner in such a prominent part of town. It was a revelation, Cardone said.

“Keely and I looked at each other and we were like, ‘Oh, shoot, there’s a little bit of a need for this support.’”

Cardone has lived in Toms River for most of his life and said he has encountered more LGBTQ residents there.

“Over the past couple of years, I have just started meeting a lot more — I’d say middle-aged and 30s and 40s — individuals who are part of the LGBTQ community.”

Jonathan Petro, an openly gay lawyer and chair of the Greater Toms River Chamber of Commerce, is running for mayor of the town. He said he welcomed the change in community tide.

“Having grown up here for 40 years, the idea of having Pride, especially when I was in school, was never something that was on the radar.”