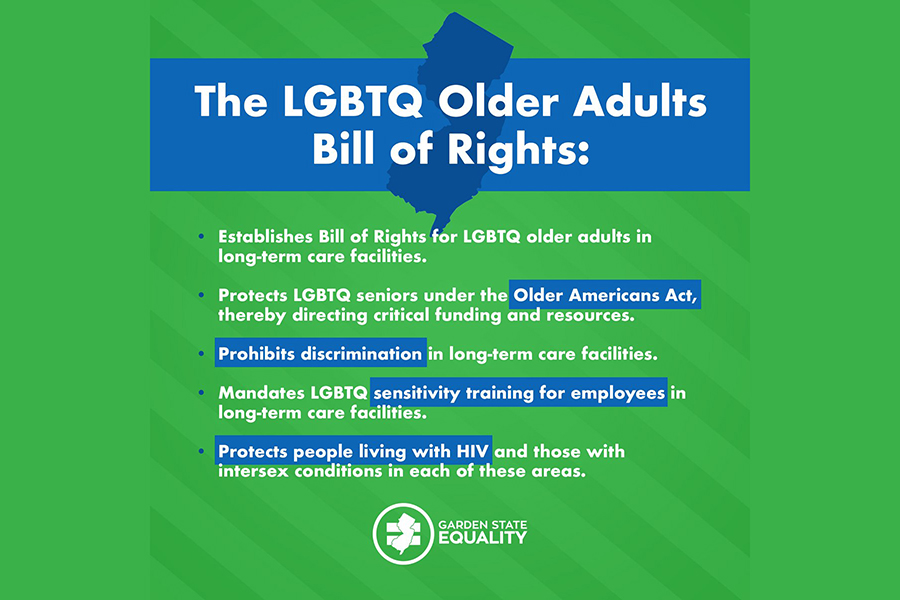 A bill that would greatly enhance the rights of and the resources for LGBTQ elders passed its first major hurdle.

The bill, S3484, the Bill of Rights for LGBT Older Adults, was voted out of the state’s Senate Health Committee last week.

The initiative, shepherded by Garden State Equality, has three principle sponsors in the Senate, Troy Singleton and Richard Codey, and two additional cosponsors are listed, Loretta Weinberg and Vin Gopal — all are Democrats.

Many of the provisions of this state law deliberately echo and complement similar provisions in the federal Inclusive Aging Act, recently introduced into Congress by Sen. Bob Casey (D-PA) and Rep. Deb Haaland (D-NM). According to GSE Communications Director

“Our purpose with this law is to pursue equality beyond the letter of the law,” said Jon Oliveira, director of communications and membership at Garden State Equality. “Laws alone don’t guarantee equality. They’ve got to be backed up with enforcement and policies and programs and resources.”

According to Aaron Potenza, policy director at Garden State, getting voted out of the NJ Senate Health Committee is but the first hurdle to be surmounted for the bill to become law.

“Now that it’s been voted out of the Senate Health Committee, it goes to the Senate Budget Committee,” explained Potenza. “Then it gets voted on by the Senate. Then it has to go through a similar process of committee hearings and votes in the Assembly. Once it passes both houses of the state legislature, it goes to the governor’s desk for his signature.”

With the legislature coming up on summer recess, it’s likely the lawmakers will be preoccupied finalizing the state’s budget. This could mean that consideration of the Bill of Rights won’t resume until the fall session begins in September.

“I’m not saying we won’t be able to make any progress over the summer,” said Potenza. “It’s possible — but unlikely.”

However,GSE plans to continue shoring up support for the bill.

Current tallies show the proposed legislation has a comfortable level of bipartisan support, and Potenza is optimistic about its eventual chances.

While it comes as no surprise that the bill’s sponsors are Democrats, Potenza said a fair number of New Jersey Republicans have expressed a willingness to support the bill’s passage.

Given all these factors, how would Oliveira rate the Bill of Rights’ chances of eventual passage?