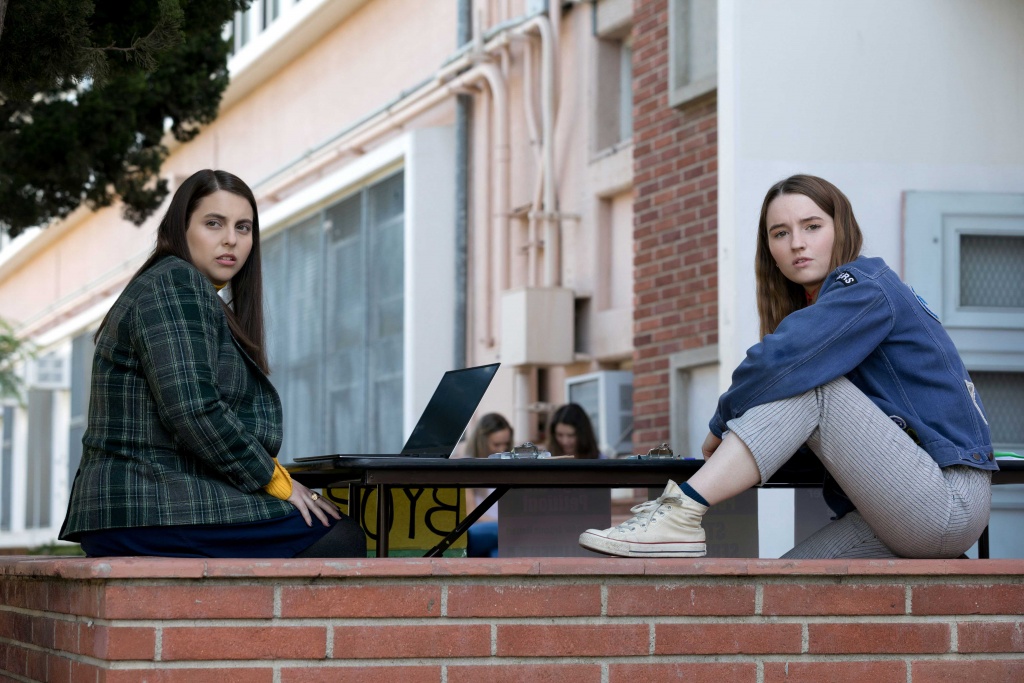 The feature directorial debut of actor Olivia Wilde, the film focuses on two best friends on the day before they graduate high school. Molly (Beanie Feldstein) is the valedictorian who remedies graffiti on the bathroom wall. Her best friend is Amy (Kaitlyn Dever), who came out two years ago but has still never kissed a girl.

These two overachievers may be intelligent, but they lack social skills. They look down on their classmates, such as Triple A (Molly Gordon), who got her nickname for scandalous roadside behavior, and they can barely tolerate the obnoxious Jared (Skyler Gisondo) or his wacky friend Gigi (Billie Lourd). Moreover, Molly is reluctant to admit she’s crushing on the irresponsible Nick (Mason Gooding), while Amy lusts after the enigmatic Ryan (Victoria Ruesga).

When Molly learns Triple A is attending the same college in New Haven that she is in the fall, she realizes that four years of studying while her peers were partying may not have been the wisest decision. So, Molly and Amy decide to make up for all the fun they missed in one night. The girls plan to crash Nick’s blowout party — if only they can find out where it is.

“Booksmart” is not high-concept, but it is aware of itself and funny. A frustration comedy of sorts, it’s the kind of coming-of-age film where the likable nerdy and obnoxious characters learn life lessons. They also discover secrets that change their thinking, making new memories and impressions in the process.

But “Booksmart” is also quite poignant. The two best friends are supportive of one another, and the messages of feminism are valuable. Molly and Amy find strength in each other when things don’t go according to plan. Real emotion is had when a setback or heartbreak occurs.

The film also makes Amy’s story quite touching as she goes from a shy, gawky teen to an empowered young woman. Her inexperience and inhibitions, especially around Ryan, are awkward and sweet. One of the film’s highlights involves Amy’s unexpected sexual encounter with one of her classmates in a bathroom. (To describe it further would ruin the magic of the scene).

Still, laughs are had throughout, like when Molly and Amy’s gay classmates, George (Noah Galvin) and Alan (Austin Crute), the drama guys, camp it up in school, at a party, or when singing karaoke. The film is refreshing and thoughtful as the queer teens are as accepted as everyone else.

“Booksmart” benefits from the airtight script — credited to four female screenwriters — which is clever and never smug or smarmy. Some of the lines are downright hysterical, as when Molly or Amy drop the name “Malala” with delicious, deadpan timing.

With no wasted moments, the main characters go from encounter to encounter, moving the story forward with little clues that pay comic gold dividends later. Witty nerdy sight gags range from a character playing the harpsichord to the sign on Amy’s bedroom door that reads, “A Room of One’s Own.” In addition, one pricelessly funny sequence has Amy and Molly, tripping on psychedelics, envisioning themselves as animated dolls (that are not anatomically correct).

“Booksmart” may poke fun at the characters, puncturing their egos and showing that everyone has moments of insecurity, but the film is never truly mean. Even if the characters are built on stereotypes, they feel authentic. The actors lean into their roles in ways that enhance them for comic effect.

Feldstein is terrific as control-freak Molly. She injects her character with just the right amount of superiority to make her come-uppance hurt, and she aggressively show her peers she can break the rules and be fun. Dever is equally strong, making Amy relatable as she endures a night that takes her way out of her comfort zone. The friendship between them is never forced, and the actors have great chemistry together.

The supporting cast is also wonderful with Lourd, whose character Gigi keeps popping up out of nowhere, talking sense before doing something completely reckless and irrational.

“Booksmart” is a great teen comedy. Its message about knowing oneself — and others — is never preachy. Wilde delivers in a way that will leave viewers laughing.