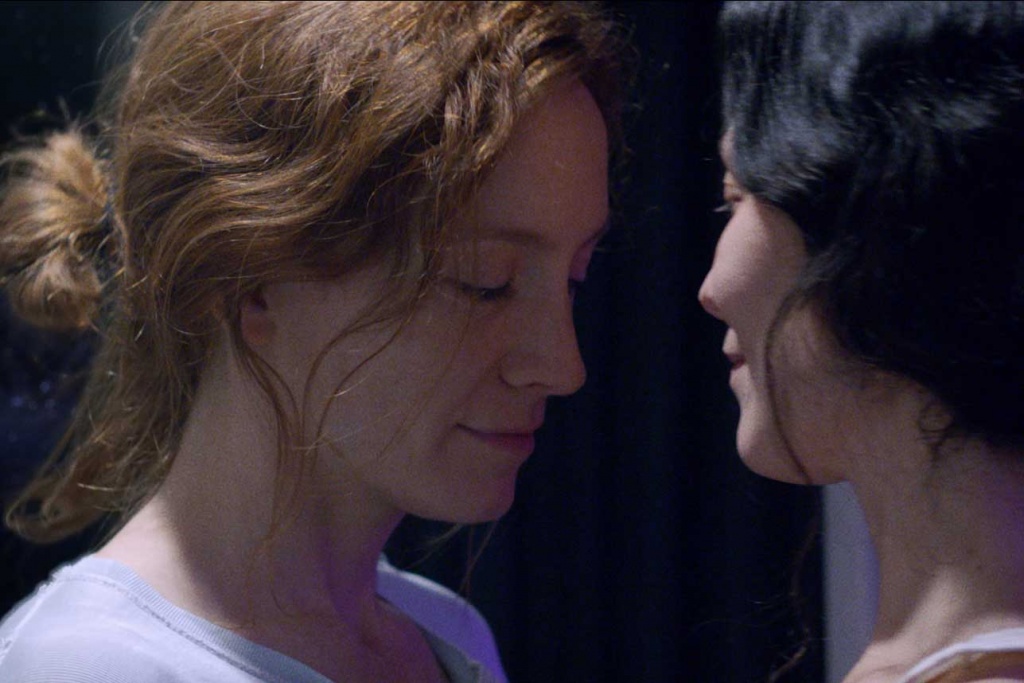 Imaginative Swedish sci-fi film “Aniara” opens with what looks like an end-credits crawl as images of disasters unspool in the background.

“Say goodbye to Earth,” someone instructs as people look out the window on Aniara, a transport craft that resembles a floating cruise ship, complete with restaurants, shopping malls, arcades and a gym.

The crew and passengers are headed to Mars, where life will continue after the three-week space journey to a new home.

But what happens in “Aniara,” opening May 17 at Landmark Ritz at the Bourse, is not unlike, well, “Gilligan’s Island.”

When the ship veers off course, everyone is trapped for an indeterminant period of time. In those ensuing years —and they are years — there are hopes for rescue. Meanwhile, society breaks down.

Cowritten and directed by Pella Kågerman and Hugo Lilja and based on the epic poem by Harry Martinson, “Aniara” considers philosophical themes of life, death and birth, as well as love and sex, anxiety and despair.

The main character, Mimaroben (Emelie Jonsson), manages Mima Hall, which can best be described as an “escape room” — but not in the sense that phrase is used today. At Mima Hall, passengers take off their shoes, lie down and put their heads on a foam pillow to experience memories of Earth.

Mimaroben, for example, likes to reflect on nature and eating raspberries. Others envision scenes from their lives.

The room is initially not very popular until Aniara goes off course; suddenly, everyone wants to escape their present reality and recall a happier past. Mimaroben cannot handle the overwhelming demand.

One of the visitors to Mima Hall is Isagel (Bianca Cruzeiro), a comely pilot to whom Mimaroben is attracted. She can hardly suppress her lust when she spies on and admires Isagel in Mima Hall or in a pool, where they meet one night when they both can’t sleep.

The women’s romance shifts into high gear when they are reassigned jobs and end up rooming together. Isagel and Mimaroben start to dance; they soon share a shower and a kiss and then have sex.

“Aniara” uses the birth of Isagel’s child, as well as the rescue mission that is availed after years of orbiting, as a way of commenting on the preciousness of life in the crucible that is the transport ship.

The film asks — but deliberately does not answer — larger questions, such as how do we provide for future generations, and contemplates immediate concerns about managing our food, education and our pleasure in a society that is decaying. It is an obvious but critical allegory for life on Earth.

While this fable is compelling, it doesn’t generate much emotion as it presents lessons for humanity. Scenes where Mimaroben actively tries to save Mima Hall from being destroyed by overuse, or a man experiencing the anxiety of what he fears to be impending death, are curiously unmoving.

Likewise, while it is pleasing that the intimate relationship between Isagel and Mimaroben is accepted and not condemned, the bond between the women and their child feels underdeveloped.

Moreover, it’s difficult to care about the film’s characters because they are primarily symbols and cyphers rather than actual people. Even Mimaroben’s first roommate (Anneli Martini), a wise, older woman known as The Astronomer, is as cold and unfeeling as the spaceship’s design.

That said, the film’s visuals are impressive, particularly since “Aniara” was filmed with a relatively low budget. The special effects are stunning, from birds disintegrating in the sky, to the design of the spacecraft and the futuristic images that populate various screens in Mima Hall and elsewhere.

The performances, however, are uneven. Jonsson is sympathetic as Mimaroben, and she has a number of impassioned scenes including a piercing meltdown. But the film has too many didactic moments where her character serves as a guide for viewers to follow the action.

Cruzeiro is suitably enigmatic as the alluring Isagel, a woman who mostly represses her emotions. She does become intriguing once she becomes a mother, but Cruzeiro is hampered by a script that doesn’t sufficiently flesh out her character.

This drawback is indicative of the film’s greatest flaw: The drama is too subdued. “Aniara” is simply too passive to generate much interest; the discussion of the ship being rescued is only briefly interesting.

Viewers, like the characters aboard the transport ship, may find themselves waiting, patiently or with resignation, for it to all come to an end.