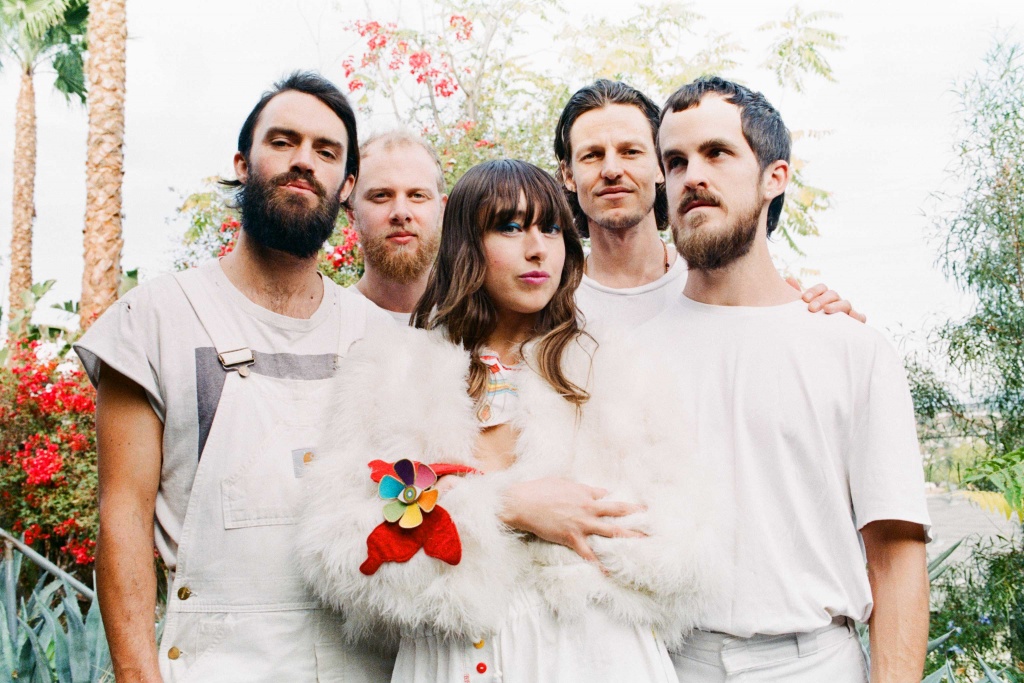 Los Angeles-based psychedelic pop band Amo Amo is celebrating a summer of love with the recent release of a self-titled debut album and a tour that takes them across the country.

Amo Amo formed in June 2017 when a group of musicians and friends (Love Femme, Omar Velasco, Justin Flint, Shane Mckillop and Alex Siegel) got together for an impromptu session in Los Angeles with Jim James, the singer, guitarist and producer of art rockers My Morning Jacket.

Love Femme, the band’s queer singer, whose pronouns are zi/zir said  zi  happened to join the group in the studio as they were recording songs.

“We travel in similar music circles,” zi said of zir connection with the other band members prior to Amo Amo. “Jim was really interested in one of Omar [Velasco’s] projects, which involved almost all the members that ended up in Amo Amo. They invited me to sing one day at a studio session, and that’s how I got involved. The five of us decided that this was the direction we wanted to go in.”

The musicians started clicking creatively and, five months later, the group now named Amo Amo emerged with a collection of songs that have one foot planted in the colorful folky, disco-ish, soft-rock of the 1970s and the other in the ambient new wave and alternative electronic sounds of the 1980s-early ’90s. While Amo Amo’s sound is hard to pin down, it is even harder to resist.

“We collectively have eclectic influences,” Femme said of the group’s creative muses. “I grew up listening to The Doors a lot, and also Heart and Janis Joplin and also a lot of doo-wop too. We have a love of older music.”

Femme said zir name’s connection to the band name (‘amo’ is Spanish for love) is coincidental and intentional at the same time.

“Love is short for Lovell,” zi said. “It just kind of worked out that way. When we were writing songs for the album, one of the songs had ‘amo’ in it. We talked about the idea of what we wanted to make music about, love being one of them, so Amo Amo was an appropriate name for the band.”

“I would hope that me being queer would appeal to more femme and LGBTQ fans,” zi said. “I would hope that they would feel safer coming to our shows. It’s just who I am. Mostly, I do it for my own well-being and for my own ability to honor the feelings I’ve had since I was very young. If our songs make people feel safe and happy and give them a sense of inclusion and they’re inspired, that’s wonderful. But, first and foremost, it’s about my own emotional wellness and expressing myself in that way.”

Aside from being a songwriter and singer, Femme further stretched zir artistic talents when directing one of the band’s videos for their dreamy reggae-infused single, “Closer to You.”

“Everybody contributes on that level,” zi said of the band’s creative processes for songs and videos. “When I came in, that was a big part of what I was doing. ‘Closer to You’ — I directed and edited that one. We green-screened it. That was my creation with a lot of input from the band. We’re very egalitarian. Everybody had a say in it. The second video, ‘When I Look At You,’ was directed by Destefano Deluise. The first time she ever saw us play, she had the idea for this music video in her head. She was so excited and completely came up with that whole thing. So we just went with it.”

Like the group’s sound, Amo Amo’s video harkens back to a time when videos were both works of art and playful instead of sensory-numbing promotional tools and ego trips. Femme said zi sees the band’s videos as forward thinking instead of some form of retro nostalgia.

“I think of videos as a reference to the future and futurism instead of a throwback to the past,” zi said. “Visually they represent the powerful nature ideology that, miraculously, we can all just watch anywhere, any time on our phones. So I think that it’s a wish for now and there’s hope for the future. That’s what I think about for music videos, that someone is going to see this and feel what we feel right now. The glory days [for music videos] are right now because I get to have a say in it.”