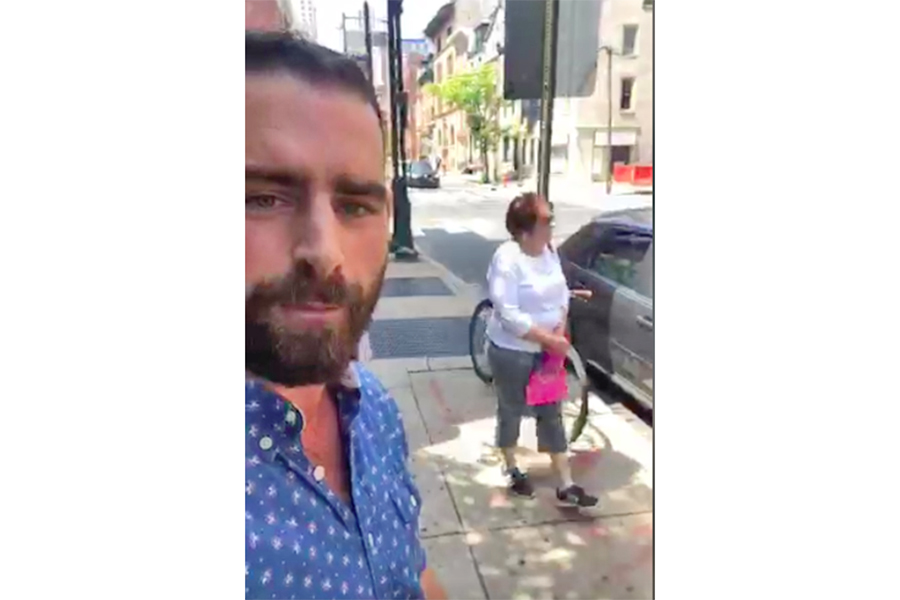 A video showing State Rep. Brian Sims berating a woman saying the rosary outside a Planned Parenthood clinic isn’t easy viewing, yet at press time it had been viewed more than 1.1-million times.

In his video, taken outside the clinic at 1144 Locust St., Sims (D-182nd Dist.) approaches a woman who appears to be in her 50s and who is a member of pro-life organization Sidewalk Servants.

Sims accuses the woman — who never says a word during the nearly nine-minute video — of shaming women who enter the clinic. Sims calls her “an old white lady telling people what’s right to do with their bodies, shame on you.”

She is neither old nor, at least vocally, shaming anyone. She’s walking back and forth, rosary in hand, head bowed. She never speaks to Sims, who is so close to her we can see her heart beating in her chest. He never stops insulting her throughout the tirade, saying, “Shame on you! What you are doing is disgusting.”

The video and story have gone national, appearing in Newsweek, USA Today and throughout Pennsylvania media, as well as a plethora of pro-life/anti-abortion sites. On May 7 and 8, it was a lead story on all Philadelphia’s TV news stations.

The pushback against Sims prompted him to upload another video to Twitter on May 7. An explanation and an acknowledgment of his actions, if not an apology, the new video garnered a stunning Twitter reaction: at press time, there were 25,000 replies but only 569 retweets.

In the written portion of his tweet, Sims said: “I will fiercely protect a woman’s right to make the best choices for her health and her body, unimpeded. I also know that two wrongs don’t make a right, especially on the front lines of a civil-rights battle. I can do better, and I will do better, for the women of Pennsylvania.”

It won’t be a good day to be a young black woman — the primary demographic of the clinic in majority black Philadelphia — trying to get to her appointment. But it will be a good day for self-declared pro-life politicians like our two U.S. senators — Bob Casey Jr. (D) and Pat Toomey (R).

Sims admits in his second video that he poorly chose his target. Anyone who’s walked or driven by Planned Parenthood on a Friday has seen the protesters. Few are quietly meditative over their rosaries. Most are angry with the women entering the clinic, trying to force grisly anti-abortion literature on them.

This story is the latest salvo in the culture wars between abortion-rights activists and far-right religious extremists. That battle has been exacerbated in recent months by President Trump’s false claims that live babies are being executed in nine-month abortions. As Sims was uploading his regret video, Georgia Republican Gov. Brian Kemp was signing the nation’s most restrictive abortion bill into law. The so-called “heartbeat bill” bans abortions after six weeks. Most women don’t even know they are pregnant until after eight weeks.

Sims has lived across the street from Planned Parenthood, which he calls “one of the most heavily protested in America,” for 15 years and has volunteered as a patient escort for the past seven years.

“I’ve seen men and women and teens try to go there for routine healthcare. For checkups, for PAP smears, for breast exams, for STD screenings, and yes, for abortions,” Sims said.

Sims himself is a client of that Planned Parenthood clinic. “In fact, it’s where I go for my own life-saving PrEP medication, and I’m grateful for the services they provide.”

Sims’ experience as a patient escort prompted his May 5 video and a previous video in which he had offered $100 to anyone who would give him the names of the teenaged girls then protesting in front of the clinic. As Sims detailed, he has “seen firsthand” the way “mostly young girls” are treated going into the clinic, citing a litany of slurs, insults and racism.

If only that had been a part of the video that went viral.

Instead, the anonymous woman told local news media, “I forgive him and I am praying for him. Please do the same.”

Planned Parenthood president and CEO Dale Steinberg was forced to straddle the political fence with a statement: “While we do not condone Representative Sims’ approach, our patients deserve to have access to healthcare without shame and stigma.”

Dr. Monique Ruberu of Holy Redeemer Hospital runs Sidewalk Servants. Ruberu said, “This poor woman who wanted to do nothing but stand, pray and hand out blessing bags was verbally assaulted and badgered by a state rep. for nine minutes nonstop. This man is obviously hurting, and we pray that he finds peace and has a conversion of heart so he no longer feels the need to abuse those who hold differing beliefs.”

Rather than highlighting the bullying of protesters shouting at young women, it’s Sims who seems the bully, and not just a little misogynist with his “old white lady” mantra. The praying woman never goes near the entrance to the clinic.

Sims admits, “I wasn’t [acting as] a patient escort. I was a neighbor, and a concerned citizen, and I was aggressive.”

Responses to Sims’ videos have also been aggressive. Scrolling through the replies illuminates just what Sims said: insults, slurs and invective. Many say they will pray for Sims, others say he should burn in hell. Quite a few demand his resignation. Many uploaded images of abortions.

Politicians make mistakes. Sims made one. He’s acknowledged that and explained why. But there are neither explanations nor apologies from Trump for his egregious claims about live babies being butchered. And the impact of Kemp’s bill will harm the most vulnerable women in Georgia.

Sims’ outrage is understandable and, as a longtime patient escort, he is literally walking the walk for abortion access, which is being whittled away state by state. It is in the state legislatures that the most harm is being done to women’s civil rights, and it’s there that Sims should wage this battle.