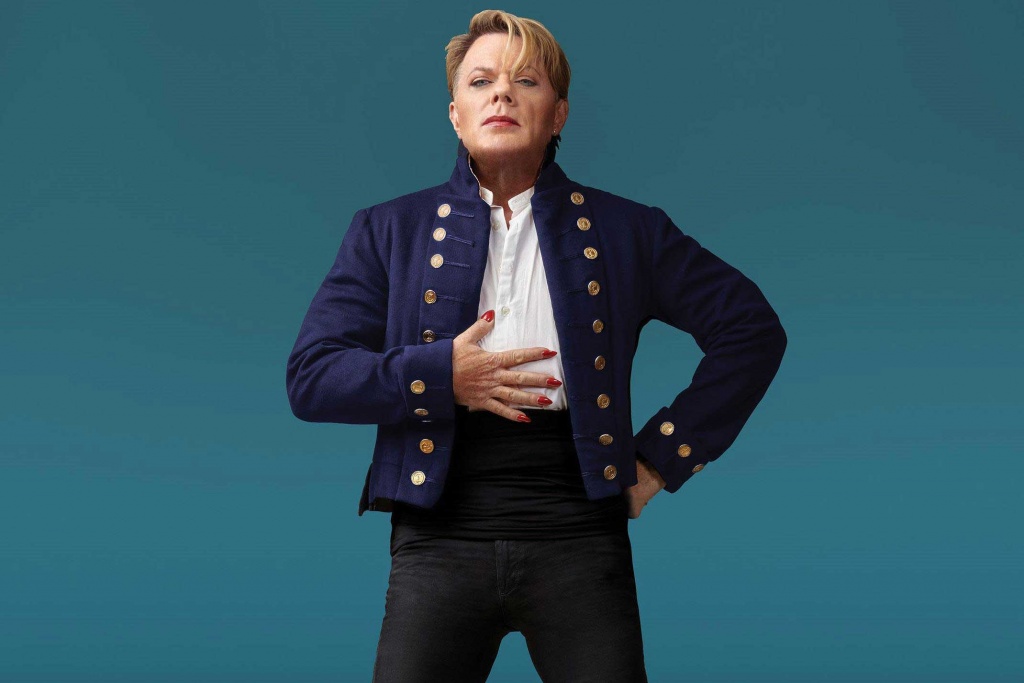 Buzzing from the success of his autobiography, “Believe Me: A Memoir of Love, Death, and Jazz Chickens,” and the news of his upcoming co-starring role (with Laurie Metcalf) in the Broadway revival of Edward Albee’s “Who’s Afraid of Virginia Woolf?” nothing is consuming historian-humorist Eddie Izzard like Wunderbar.

Developed in Paris to be spoken in French, German and English, Izzard’s Wunderbar stand-up comedy tour — hitting the Merriam Theater May 15 — is dedicated to what he calls the last 100,000 years of history.

“I am interested in my heart’s history in an odd way,” he said. “The ways in which I make myself go forward and do things like run marathons and do gigs in four languages is by being slightly disconnected from myself. So, when I look back, it is as if I am a foot soldier doing all the work.”

Along with topics such as how chit chat was developed and how humans began decorating caves, the British-born king of the witty, bittersweet non-sequiturs, Monty Python-like absurdities (John Cleese called Izzard “the lost Python”), and a literary-based stream-of-consciousness comes with a deeply personal, sartorial style of lipstick and high heels.

In 1985, Izzard announced he was transgender. He acknowledged that coming out as transgender was difficult when he did so then. Even brave. “Things are better now, yes,” he said.

Izzard admitted that while he dressed in women’s clothing, he didn’t approach gender directly.

“I never spoke overtly about it. Instead, I used to talk diagonally. I used to talk about ancient weird kings or cats with guns, and I’d drop it in diagonally. I would joke that I was attacked by a lipstick, and that was a funny way of making light about the journey that I had. If I had done lectures about me being transgender, that would never have flown. Do I have any regrets or should I have done it differently? Maybe. I thought I had worked it out logically. I had come out to my friends and joked about it, but wearing dresses and makeup made them realize I wasn’t joking. I tried to get the look together. You couldn’t plan to talk to anybody about it. No one could advise me.”

One can’t help but wonder if, as a beloved comedian making light of the situation, he may have confused the issue for some … that perhaps that spoonful of sugar was too sweet where coming out was concerned.

“That was a big question … going back and retro judging doesn’t bother me because I had to do it, and comedy was my thing,” he said. “Be it trans, transgender or transvestite — the language at the time — I had to come out. Honesty is surely a good thing, Mr. Trump.”

Along with issues of gender, Izzard speaks opening about his aversion to God. Izzard explained that because of Europe’s relationship to religion, atheism was much less challenging of a topic than his gender.

“In Europe, we just don’t have religion,” said Izzard. “God went away. In America, you say ‘God bless America,’ but if you said ‘God bless Britain’ in the U.K., we would just wonder what you were talking about. We just think He’s not there. We’d be happy for Him to be there. We’re not non-believers. We just believe in humanity, good will. If the floaty guys come down and help — fine — any of the floaty guys, be it the Muslim floaty guy, the Jewish floaty guy, the Protestant floaty guy, the Catholic floaty guy. They’re up there floating around and they never come to help. So, I’ve decided that He, She or It doesn’t give a monkey about it all. Atheists believe in people, because it is humans that change everything.”

As infatuated with gender and God as Izzard is in his routines, he also has a keen interest in time, memory and history. Anyone who has witnessed an Izzard show knows well his routines dedicated to such topics as the minutiae of a nation’s flags.

Because Izzard has a keen sense of memory and history, Philadelphia is a known quantity to him.

“I do know your city’s history, its role as a capital city and the Revolutionary War,” he said. “Now, I’ve played 45 countries by this point, but America and its history stands out. I’m also coming to share my history. I know that people might not think that I have a worthy past — what with me usually talking about chickens, guns and cake — but it’ll be quite nice to humanize my story.”