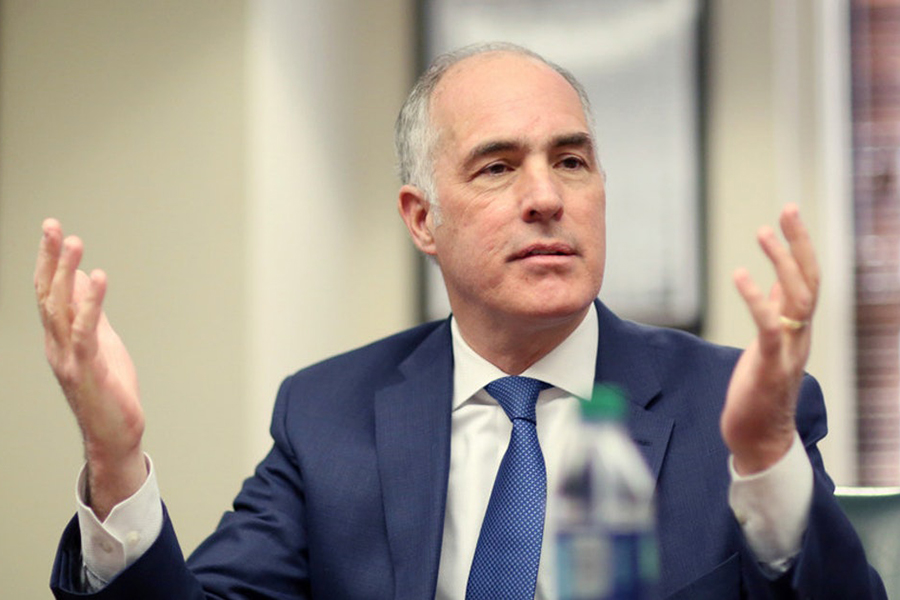 A Pennsylvania senator is among three U.S. legislators who introduced a bill to expand health services and resources for the older LGBTQ population.

The IAA has three main goals. First, it would establish an Office of Inclusivity and Sexual Health in the Administration on Aging.

Second, it would establish a rural grant program to fund training and expand available resources to address the healthcare needs of LGBTQ seniors.

Third, it would reauthorize the National Resource Center on LGBT Aging — the country’s only technical-assistance resource center aimed at improving the quality of services and support for older LGBTQ individuals.

Casey, a ranking member of the Senate Special Committee on Aging, has made addressing the needs of seniors, including LGBTQ, one of his signature issues.

“For too long the needs of LGBT elders and seniors living in rural communities have been overlooked. The Inclusive Aging Act would expand access to culturally competent health care services for LGBT elders and help reduce social isolation among older Americans in rural areas,” said Casey in a press release.

The senator promoted the IAA at a townhall April 28 in Center City, where he emphasized the isolation and scarcity of services experienced by rural LGBT seniors. He noted that, in Pennsylvania, almost three-quarters of the state’s counties could be classified as “rural.”

“How prepared are our communities to provide needed services for LGBT seniors?” Casey asked his townhall audience. “Especially rural communities? In a state like ours, we have a tremendous rural population, and in rural counties there are great challenges, unique challenges, confronting LGBT seniors.”

The IAA was crafted to expand legislation that Bennet first introduced in 2015.

Terri Clark, a member of the Mayor’s Commission on LGBT Affairs Elder Advisory Group, said the IAA is a much-needed response to the pressing needs of the LGBT elder community.

“Our LGBT older adults have unique experiences as compared to their hetero/cisgender peers,” she said. “LGBT seniors have lived a lifetime of discrimination and stigma based on their sexual orientation and/or gender identity. Many are childless or have been disowned by their biological families, resulting in the need to rely on ‘families of choice,’ who are often in the same age cohort, having age-related needs of their own.”

Clark also noted the economic disparities of LGBT aging due to a lack of laws and politics that could offer protection.

For those longterm survivors of HIV, their care/social networks have shrunk due to so many of their friends, families and lovers being lost to the AIDS epidemic. Folks with HIV are now living into their 60s, 70s, and beyond. People are coming out and transitioning later in life, and numbers of LGBT older adults and those living with HIV will continue to grow as the baby-boomer generation is now aging. However, the aging network is not always ‘ready, willing and able’ to serve our elders.”

The introduction of the IAA coordinates with a similar legislative initiative in the U.S. House of Representatives. Last week, Rep. Deb Haaland (D-NM) introduced the Elder Pride Act, which also would create an Office of Inclusivity and Sexual Health and establish a rural grant program.

This follows on the heels of a bill recently introduced by Rep. Suzanne Bonamici (D-OR), the Ruthie and Connie LGBT Elder Americans Act, to establish and fund the National Resource Center on LGBT Aging and designate older LGBTQ Americans as a population of “Greatest Social Need.”

Casey worked with Rep. Haaland on the introduction of the two similar initiatives. “Obviously it’s good to get similar legislation going in both Houses, to facilitate the process,” said Casey.

If these bills pass their respective houses, they would be reconciled by a joint committee before being sent to the president to be signed into law.

Senate Majority Leader Mitch McConnell (R-KY) said he would block most Democratic legislative initiatives leading up to the 2020 elections.

The biggest hurdle would be President Donald Trump, who has expressed antipathy to efforts in support of the LGBT community.

Casey said he had to think about a strategy for navigating the IAA through the Senate before introducing the bill.

“Having any Republican attached to the bill is a breakthrough,” he said. “Having Sen. Murkowski is extremely helpful; it shows that the bill has bipartisan support. Obviously we’ll keep trying to get more Republicans to step up and sign on, but having even one Republican onboard increases our chances tremendously.”

In dealing with the obstacle presented by the often-recalcitrant McConnell, Casey said, “Once in a while, Mitch likes to point to bills that are bipartisan and let them through in order to show he’s open to bipartisan negotiation. And the fact that the bill is part of the reauthorization process for an already-existing agency [the National Resource Center on LGBT Aging] will, I think, open the door to some horse-trading. Sen. Murkowski can go to him, as a Republican, and say, ‘This is important to me. Can we talk?’”

LGBTQ senior advocates hail the IAA as a valuable step in addressing the growing needs of elders.

David Griffith, director of programs and outreach for the LGBT Elder Initiative, said the LGBT older population is going to continue to grow, necessitating increased engagement with the aging-services network.

“It is really vital that the aging-services system becomes better prepared to effectively provide for our LGBT older adults.,” said Griffith. “This legislation can help to do that by supporting new research, funding initiatives, and cultural competence resources for providers.”