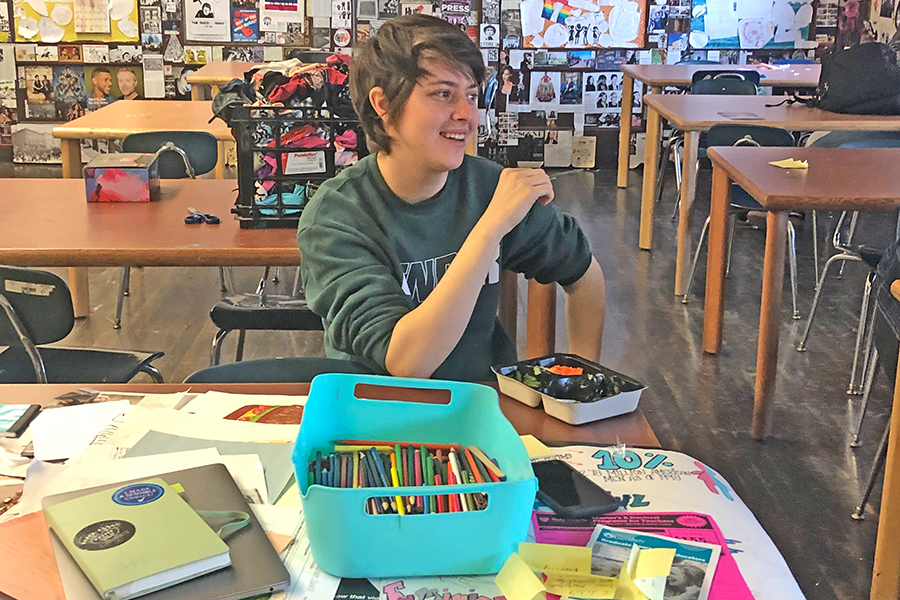 Freda Anderson created the first Queer-Straight alliance at the U School, a North Philadelphia high school where she teaches a community-organizing class.

On May 11, she will be one of 12 educators to receive the Teacher as Hero Award presented by the National Liberty Museum.

Anderson’s colleague, Clarice Brazas, who teaches 10th-grade humanities and helps run the QSA, nominated her for the award.

“Freda’s always willing to take on more responsibilities, especially things that help kids specifically,” Brazas said. “In addition to a lot of kids confiding in her, a lot of teachers confide in her as well.”

Out of 77 applications, NLM associates selected 12 educators who demonstrate outstanding teaching practices and act as role models to their students and coworkers.

Award winners will have their stories displayed in NLM’s Live Like a Hero gallery for the next year.

In the QSA, which consists of six core members but ranges in size from meeting to meeting, students engage in a variety of discussions, activities and projects.

All students are encouraged to write anonymous responses and put them in one of two public boxes. QSA members are taking those responses and making a collage to be displayed in a hallway in the school.

Anderson also facilitates discussions about sex education in the group. She creates a comfortable environment for students to learn about safe sex by allowing them to ask questions both openly and anonymously.

Over the course of Anderson’s three years at the school, many students have opened up to her about personal issues, including those surrounding sexual identity.

“Freda’s really good at building relationships with kids,” Brazas said. “A lot of kids trust her and come to her with all sorts of different issues and questions. In QSA we clearly have a lot of kids who are queer and trying to figure out where they fit in the world.”

One student approached Anderson a few weeks ago because she wanted to make a plan for coming out to her mother. Anderson said she talked with her and gave her advice, and continued to provide a supportive, safe space for her after she came out.

Anderson identifies as bisexual and genderqueer and uses both she/her and he/him pronouns. She frequently tells her students about her own coming out experiences and emphasizes that coming out is typically an ongoing process.

Growing up, Anderson always knew that she/he was genderqueer.

When Anderson was in school, it was apparent to other students that she was “tomboy-ish” and queer in some way, but because her peers were unfamiliar with what it meant to be gender-nonconforming, they assumed she was gay.

“That, at the time, really bothered me.” Anderson said explaining she didn’t like that her gender presentation as sometimes masculine or her identity as sometimes a boy meant people made assumptions about her sexual orientation.

These misconceptions caused Anderson to shy away from embracing her identity in high school. She didn’t talk about her bisexuality or genderqueerness with her friends or family and didn’t join the QSA at her school. It wasn’t until after college that she came out to herself, her boyfriend at the time, and her mother.

“I always tell that to the kids because I don’t want them to think it’s some box that you check off, because it’s a lifelong journey of figuring things out,” Anderson said.

When Anderson came out to her students and colleagues at the U School, she expected to encounter some contentious reactions.

Instead, she was surprised to receive enthusiastic acceptance, and hardly any conflict.

Academically, Anderson works with students in a community-activism class called the Organize Lab, one of three classes that U School Principal Neil Geyette said are fundamental in preparing 10th- and 11th -grade students for the workforce.

As part of an ongoing project in the Organize Lab, Anderson advises her students to reconnect with alumni and staffers from Ferguson Elementary, the previous occupant of the U School building until it closed in 2013 due to budget cuts. Although the U School admits students citywide, about half of its students are from the neighborhood and have a connection to Ferguson.

Anderson noticed some tension between students from the neighborhood and those from other parts of the city. So she had her Organize Lab students invite Ferguson alumni and teachers to the school for interviews, which were recorded in the school’s Highlight Lab.

Through these conversations, members of the Ferguson community bonded with U School students and collaborated with them to plan a Ferguson reunion. The event took place at the end of the 2018 school year and welcomed almost 200 guests.

Anderson plans to set up a history museum to celebrate the Ferguson community in the form of interviews and objects that once belonged to the school.

“I want to have the class function as a nonprofit,” Anderson said. “My hope is that one day the class will be so well-oiled and working that people in the neighborhood can look to it as a resource.”

The Teacher as Hero Award ceremony will take place at the National Liberty Museum on May 11 and will be hosted by NBC10 meteorologist Tammie Souza. Middle-school photography teacher and 2018 grand-prize winner Tony Rocco will present the keynote address.