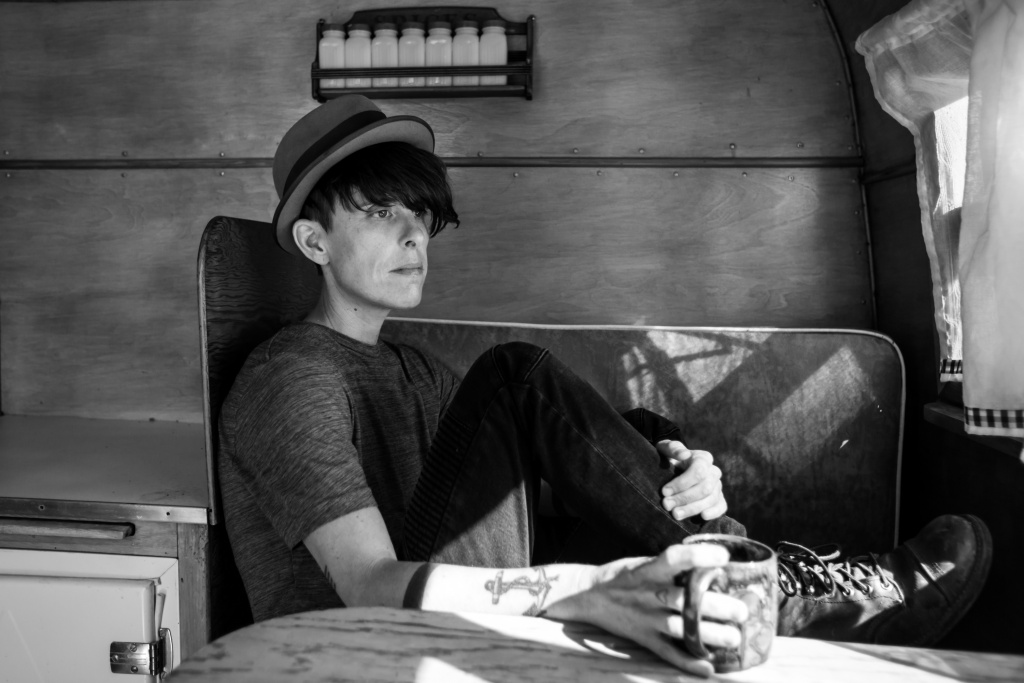 Andrea Gibson said poetry allows a space “open to fall apart if we need to.”
A prolific genderqueer writer and spoken-word artist, Gibson performed poetry to a crowd of over 400 (nearly all LGBTQ) at Philadelphia’s The Foundry.

Andrea Gibson said poetry allows a space “open to fall apart if we need to.”

A prolific genderqueer writer and spoken-word artist, Gibson performed poetry to a crowd of over 400 (nearly all LGBTQ) at Philadelphia’s The Foundry.

On tour for two months, this time around, Gibson said, “I’ve been so emotional. I can’t figure out what makes it different from the past. I’ve been tearing up almost every night. Maybe it’s my hormones or the tenderness of the audiences.”

Philadelphia has hosted Gibson many times, and they said that here audiences request their most tender poems.

“I love it, it’s always these obscure poems that are rarely requested anywhere else but are requested over and over when I’m in Philly.”

Gibson’s queer-femme partner, Megan Falley, opened and the two performed the final piece of the night together.“It’s special as a queer artist to perform with my partner, to be in conversation and prepare sets together,” Gibson said.

Recently Falley and Gibson collaborated to write “How Poetry Can Change Your Heart.”

“We were really nervous about it at first,” Gibson said. “We were both unfamiliar with writing prose, but as soon as we started diving in, it was fun and celebratory. I so often write in darkness about topics that are heavy and unpleasant, but this was pure celebration to an art form that has lifted us both up.”

Gibson said the flow they and their partner created was surprising and tender. “It was sweet. We’d write in the same room and bounce back and forth.”

Falley, also a poet, is enamored with performance and the auditory component of poetry.

“It’s important for her to hear her work and experience listening to it out loud,” Gibson said, adding that Falley feels the most connected to poetry when performing it. “She feels alive and awake — finds it most purposeful and is energized by it.”

“Being on stage terrifies me,” Gibson said, adding that it’s the process of writing that most appeals to them. They judge a poem by how much time passes while working. They perform because, “I love the art form so much that I have to do it even though it terrifies me.”

“Meg writes like a songwriter,” Gibson said, and her work is proof of that — melodic and resonant, while tackling mental illness, suicidality, and fear. Falley, like Gibson, also writes about queer love — its implications, potential and beauty.

No stranger to collaboration, Gibson recently worked with Ani DiFranco to produce a video, “America, Reloading,” a commentary on gun control and school shootings. Gibson wrote the piece which appears in “Lord of the Butterflies,” and began performing it shortly after the Parkland shootings.

Gibson said they felt there was always something missing; inevitably, they wanted a child to be reading it. Gibson also wanted the poem to be more accessible to people like her parents and those with more conservative views.

While they’ve performed with DiFranco many times over the course of their career, the two had never collaborated in this capacity.

“It was eye-opening,” Gibson said. “I lean toward using hopeful music, even when a piece is devastating. I want to pull hope in, but Ani felt almost as if it would be blasphemous to create hopeful music for this piece.”

Ani wanted Gibson to stay true to the grief and darkness of the poem — to be honest about its hopelessness. And Gibson doesn’t think hopelessness is bad, if it is true. They said it’s important to find a community within which you can take turns being hopeless, especially under this administration.

“Lord of the Butterflies” is a collection full of grief and struggle but also love, with an undercurrent — as in all of Gibson’s work — of beauty — articulated by both imagery and craft. In an old poem of theirs, Gibson said there’s a line that reads, “There’s not much to life but love and loss.”

Gibson said, “Really, that breaks down to there’s not much to life but love or the absence of it, or that we’re losing love when we lose someone.”

“If we pay attention,” Gibson added, “and most of us are, it’s impossible to live in this world without experiencing grief.”

“My therapist, who I’m constantly quoting,” Gibson said, “told me when I was going through after-Trump political depression, ‘the only thing we have control over in life is where we put our attention.’” Gibson said that they try to focus on beauty and “show up to address the darkness.”

“Last night,” Gibson said, “I was staring at my dog and was overwhelmed with love for her, and at the same time my chest was full of grief because love means knowing you have to say goodbye.”

Love and grief, they said, “are always dancing.”

Gibson is and has always been open about their relationship to therapy and mental health, writing against stigma. In addition to their dog, who travels everywhere with them.

Gibson said, “I do a lot in terms of self-care because I’m so aware I wouldn’t survive if I didn’t. I can see how it would be to crash and burn.”

“I don’t know if there’s been a day on tour when I haven’t cried,” Gibson said. “I wash my emotions clean. I do a lot of consistent talking and praying to people I’ve lost who are on the other side, and spirits.”

Gibson’s work brims with faith but challenges the mainstream perception of spirituality. They were raised Baptist and attended a “very” Catholic college. “When I came out,” Gibson said, “I felt like I had to throw it all away, and then I returned to it, taking the parts of it which had resonated with me and those which I felt had shaped me into a better person. A lot of that had to do with believing in magic, believing in possibility — things I couldn’t see; holiness as kindness and wholeness.

“Writing the other day, I was thinking about a line and about having the same gender as God. I know it will make some people mad but being genderqueer and living beyond the binary feels that way — expansive.”

Gibson’s identity is central to many conversations in their poetry. “I’m inclined to approach most pieces from a place of curiosity, uncover something new. Questions are innately queer. Answers are so fucking straight.”

“I figured out a lot about my queer identity through the process of writing,” Gibson said. “Leslie Feinberg said ‘Gender is the poetry each of us makes out of the language we are taught.’ The more language we have, the more we can understand our gender, and our gender is given more colors.”

Language, for the LGBTQIA-plus community, has changed and evolved over the course of Gibson’s career. They said this evolution has allowed them to continually make new discoveries surrounding their identity.

“I remember being given the word ‘genderqueer’ — that word impacted my life so much. Prior to that, I felt like I knew myself, even as a kid, but didn’t have language for it.”

Queer art and visibility also have been crucial to Gibson’s evolution.

“One thing I’ve noticed for myself — and I’d be thrilled to know a bunch of people who aren’t like this — seeing a part of myself somewhere else first has been how I’ve uncovered myself. That’s the value of queer art and artists and people being visible with a full expression of who they are. I’ve been able to see more and more of myself as time progresses.”

At a performance, you’ll likely see people cry and laugh, experiencing a full range of affect in only a couple of hours. The setting is often intimate, regardless of crowd size. Gibson said, “That’s what spoken word is.”

“It would require more bravery to keep myself shut off from sharing whatever is inside of me. It’s terrifying, but I can also feel it creating safety. Truth is a safe place, the safest place to exist.”

Excited about poetry’s place in contemporary society, Gibson said when they first began trying to book music venues, it was difficult. On April 29, they filled the Foundry at the Fillmore.

Gibson said they feel energized that so many people came out on a Monday night to hear poetry. “It’s great for the art form.”

Gibson’s final poem was “Fight for Love,” a poem they performed with Falley  about arguing in a relationship.

Gibson said, “If I could do every poem of the night with her, that would be preferred.”

Though anyone can see their relationship residing in the poem “Fight for Love,” it is particularly resonant to queer relationships.

“Queer people are great at supporting queer artists,” Gibson said. “Queer people want to support queer art. We are all desperate to see art where, inside of it, we find ourselves.

Gibson will perform at Lancaster Pride July 20. For all tour dates and more information, visit andreagibson.org/tour.