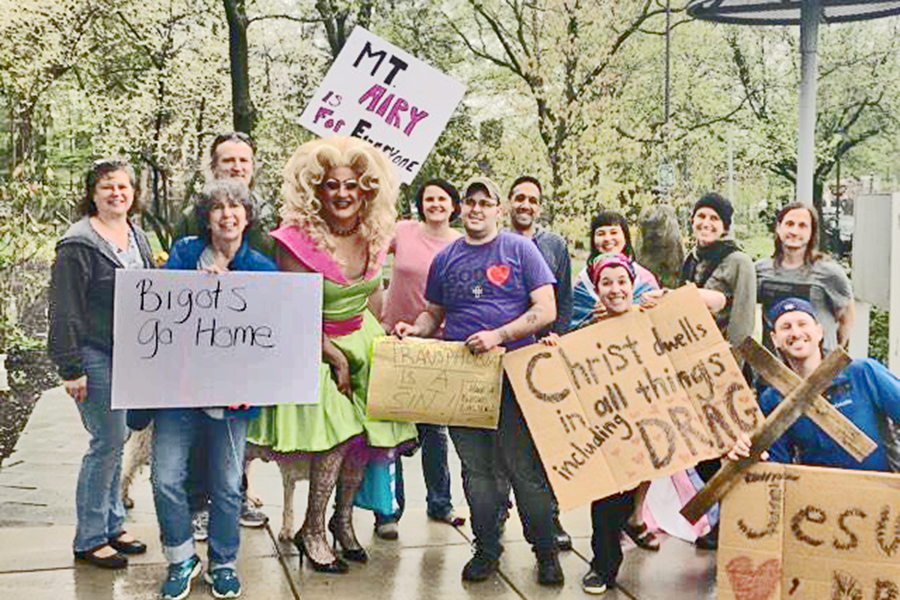 The nation’s newest culture war played out on the grounds of a Philadelphia library last weekend, marking the first such local demonstration over a Drag Queen Story Time.

A Christian group from Hanover clashed with community members outside the Free Library’s Lovett Memorial Branch in Mount Airy during an April 20 DQST  reading.

“It was hard,” said Ian Morrison, known as drag performer Brittany Lynn, who founded the local DQST. “One guy had a 6-foot-tall picture of Mary. Someone yelled out, ‘Homosexuality is a sin!’ They started walking toward me and telling me something about how this will cause me to go to hell. I couldn’t help but wonder why they take so much time to protest diversity, love and acceptance. I’m a little shook up that, even in 2019, people have time to do this.”

The counterprotesters, in support of DQST, blocked the library entrance to prevent the protesters from disrupting the reading.

The local clash is only the most recent salvo in what has become a national controversy.

DQST promotes children’s literacy by having drag queens present readings at libraries, museums and other kid friendly venues. The program has gained nationwide popularity and traction in library systems.

But protests have erupted in various cities, with conservative Christian groups trying to block DQST readings while supportive parents and other community members stage counterprotests like the one on Germantown Avenue last Saturday. 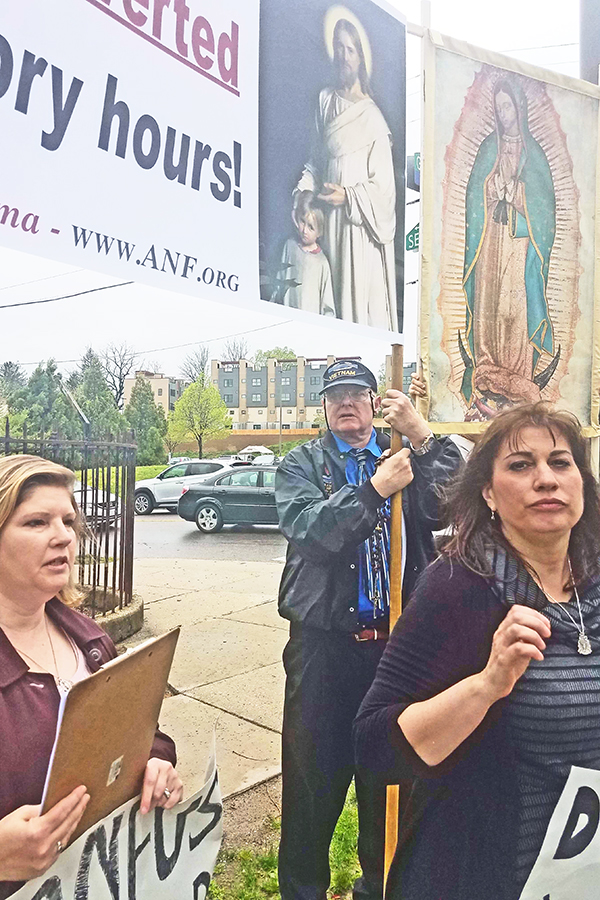 Ten members of a group called American Needs Fatima showed up in front of Lovett with about 20 community members ready to keep them from entering the library. The exchange became heated, with an ANF member calling out, “The 3-year-olds inside didn’t have a choice to be there” — to which a counterprotester replied, “They didn’t choose to go to church either.”

A series of clashes at the Landsdale Public Library last February garnered considerable publicity. Since then, Lynn said, “my [Facebook] page started being attacked,” with messages such as, “‘You’re a horrible person,’ and ‘You’re going to burn in hell.’”

When Lovett staff members learned there was going to be a protest, they contacted Lynn to warn her and offer support.

Andrew Nurkin, deputy director of enrichment and civic engagement at the Free Library, issued a statement on social media and to the press to clarify the library’s position supporting Drag Queen Story Time. The statement read, in part:

“The purpose of Drag Queen Story Time is to promote literacy while also celebrating diversity, self-expression, and imagination. Drag Story Times at the Free Library are neither sexual nor explicit in nature. The storytellers who read during these programs are trained by our library staff, and every story time is accompanied by a library professional. The tone and themes of these programs are age-appropriate, uplifting, and welcoming of all kinds of families.

“It has been our experience — and that of many other libraries across the country — that children and parents who attend Drag Story Times do not find them confusing or frightening, but rather joyful, fun, and engaging.”

Lynn, previously unaccustomed to being protested by hate groups, said she took solace in DQST’s supporters.

“It was the most positive moment I’ve experienced in my entire career. All those people showed up, in the rain, to support us. To see that, it meant everything. It was like an epic battle of love vs. evil in that the counterprotesters made everything OK, they erased the nonsense from the people who were protesting. They packed up in the face of the counterprotesters. It was awesome.”

Lynn said she also was heartened by the gestures of support from other venues that hosted DQST. The Fumo Family branch in South Philly, where Lynn has established longstanding ties, sent messages asking how it could help.

Lynn recounted a story of a family confronting the staff of the Please Touch Museum, threating to drop its membership if the museum wouldn’t drop DQST. The Please Touch staff responded simply: “We’re sorry to see you go, but you’re obviously not the sort of members we’re looking for here.”

DQST has future events scheduled at other branches of the Free Library, including the Independence and Andorra libraries, in addition to Fumo. Along with return engagements at the Please Touch Museum, DQST will be venturing as far afield as Atlantic City.

A librarian at Andorra, who asked to be identified only as Molly, said DQST has appeared twice at her branch and was “wildly popular,” with no hint of a problem. Drag Queen Story Time will be appear at this branch again in June, and Molly said she’s not expecting any trouble.

Lynn said she won’t let the prospect of future protests intimidate her, and she has added new colleagues to the DQST stable of performers, including prominent local drag performers Eric Jaffe, Timothy Quinn and Sasha Mala, to help amp the Story Time experience up to a new level for the kids.

But it’s been a sobering experience for Lynn.

“It’s one of those things that you see but don’t know how to feel when it happens to you,” she said. “But then it was like wow,  they’re really coming for me! I can’t believe this small-mindedness still exists. We’re in a bubble and sometimes we forget, but sometimes you need a reminder to know there’s still bigotry and that we need to continue to do this program and fight. I went through every Sally Field emotion today, but Brittany Lynn doesn’t back down.”

For more information and to donate to Drag Queen Story Time visit https://www.gofundme.com/f/drag-queen-story-time-20-tour.