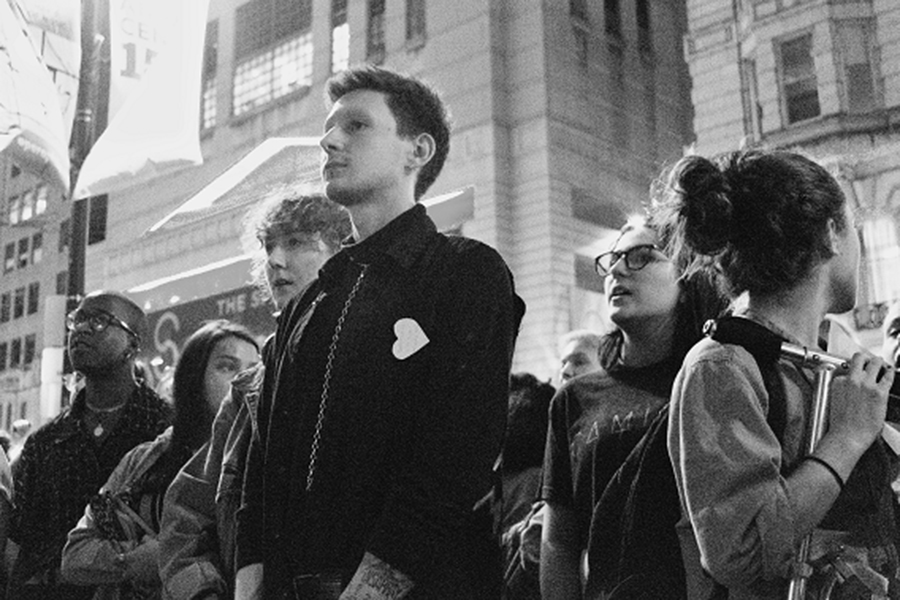 A protester allegedly set off a fire alarm and evacuated a college hall as a prominent speaker was addressing the public.

University of the Arts student Joseph McAndrew organized a campus protest April 9 when Professor Camille Paglia was scheduled to speak.

McAndrew, a nonbinary film-writing and television major, said Paglia had insulted the transgender community and sexual-assault victims many times, citing a YouTube video in which Paglia questions the validity of sexual assault victims who do not report crimes immediately. Paglia is heard saying, “If a real rape was committed, go freakin’ report it to the police.”

McAndrew said, “I find that she’s been able to go about being controversial with little repercussions, especially lately.”

On March 21, McAndrew, who uses the pronoun “they,” saw posters for Paglia’s event, “Ambiguous Images: Sexual Duality and Sexual Multiplicity in Western Art and Androgyny” to be held in a 17th-floor room of Terra Hall.

An hour before the event, McAndrew said there were at least 100 protesters sitting on the hallway floor outside the lecture hall, holding signs quoting Paglia’s previous remarks.

McAndrew estimated there were about 30 people in the audience and said some of the protesters were allowed inside to sit and listen without signs.

After only 30 minutes, a fire alarm “caused the evacuation of everyone in UArts’ Terra Hall — not just those at the event — which included more than 200 individuals on all 17 floors of the building, read a statement from the university.  “The alarm was determined to be false and intentionally pulled; the investigation into the incident is ongoing. but after only 30 minutes, the fire alarm sounded and the entire high-rise was evacuated.”

Paglia said she planned to show more than 50 images of androgynous celebrities from Marlene Dietrich to David Bowie “that the questionable actions of the protesters stopped from being shown to the public.” 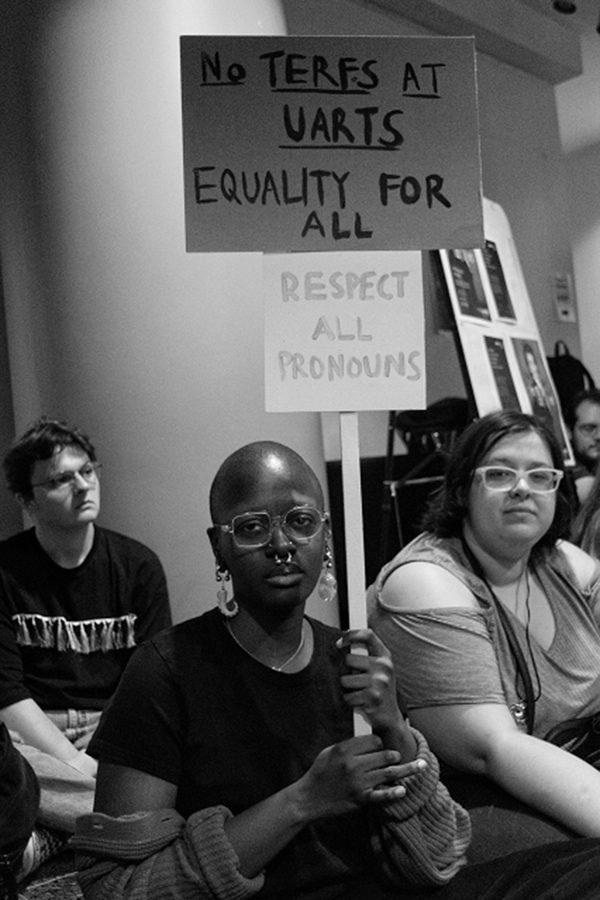 Paglia has been controversial in transgender and feminist circles. McAndrew and others shared the full-length YouTube video previously referred to, which finds Paglia saying, “The girls have been coached now, OK, to imagine the world is a dangerous place but not the one that they can control on their own, that they can’t defend themselves on their own. They expect the omnipresence of authority figures at every stage in their life. They’re college students and they expect that whatever — a mistake that they might make at a fraternity party and then they may regret six months later and a year later — that somehow that this isn’t ridiculous. To me it’s ridiculous, absolutely ridiculous, if a second that any university ever tolerated a complaint of a girl coming in six months or a year after an event, OK. If a real rape was committed, go freakin’ report it to the police.”

She then mocked a “typical modern female college student” speaking quickly with a high-pitched voice, while making fun of the #MeToo movement: “Oh no, then I would have to! Oh no, they’ll be horrible to me! Not only that but once I make my accusation, it’s so terrible! I’ll have to see the rapist in class!”

Paglia told PGN this week, “In 1986, as a product of class discussion in my gender course, I lobbied the university administration for the adoption of sexual-harassment guidelines. It was the first time the issue had ever been raised at the University of the Arts.”

Paglia referred to herself as a “libertarian Democrat who has for many decades attacked the encroachment of government into multiple areas of our private lives.”

“I am a registered Democrat who voted for Bernie Sanders in the last primary and for Jill Stein in the national election. I send checks to the Green Party annually.”

”I was the only openly gay person (student or faculty) at the Yale Graduate School when I was there from 1968-72. It was highly professionally risky — everyone else was in the closet. I was out before Stonewall!”

Paglia also addressed complaints about not referring to students with the pronouns they use: “It is a basic human courtesy that I hope would be followed by everyone to refer to a person by his or her preferred pronouns. Not to do so would be grossly rude and totally unacceptable.

“In my general libertarian philosophy, each individual has total rights over his or her body and identity, which can be changed or modified at will,” she continued. “In my books and interviews, I myself have publicly identified as transgender (which was dramatized from early childhood in my male Halloween costumes, very unusual for a girl in the 1950s). I strongly support the institution of an ‘X’ category on passports and ID cards.”

McAndrew told PGN that they “emailed the president twice asking for her talk to be moved off campus in respect to trans students and sexual-assault survivors on campus, but he never answered.”

McAndrew said the day after the protest, UArts President David Yager sent an email stating, “My answer is simple: not now, not at UArts.”

“He dismissed our protest of Paglia’s event as ‘censorship’ and compared it to ‘persecution’ of artists,” McAndrew said.

UArts associate vice president Paul Healy sent a statement to PGN: “University of the Arts President David Yager recently issued a statement reaffirming the University’s core values and commitments to academic freedom and freedom of speech. UArts’ core value of inclusion and diversity is a strong affirmation of our commitment to promoting and respecting self-expression, a wide range of ideas and diversity in all its forms, for all members of our campus community.”

The statement ended by saying Yager expressed his commitment to providing “a welcoming environment for all students, faculty, staff and guests, transgender, nonbinary and gender nonconforming students, faculty and staff.”

“This past semester has proven to be the most draining time I’ve experienced, but what I’m doing is bigger than me, so I feel the need to keep moving forward,” said McAndrew, who also works at the university’s Office of Admissions. “One professor even told me to relax on my script and focus on the protest.” 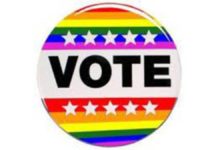