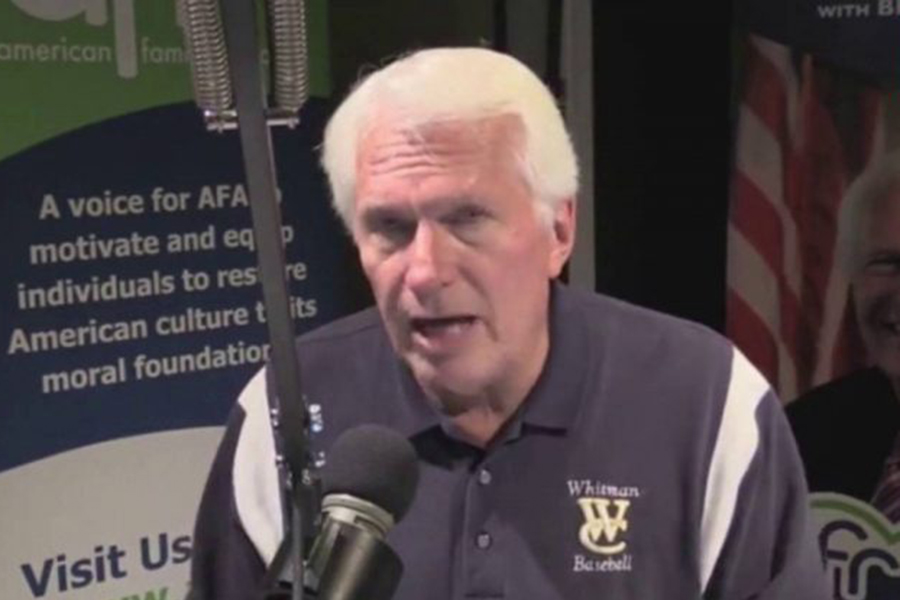 While scrolling through my Twitter feed, I stumbled upon a photo of Jonathan Van Ness walking hand in hand with Alexandria Ocasio-Cortez through Capitol Hill. Van Ness, one of the stars of “Queer Eye,” was wearing a pink sweater and skirt, Ocasio-Cortez, a Democrat representing New York, was wearing a magenta pantsuit. Someone had tweeted, “THIS is the future Democrats want.” My first thought: Oh, hell yes. That future cannot come soon enough.

Van Ness, who was joined by three of his “Queer Eye” co-stars, also visited Nancy Pelosi’s office. But they weren’t there just for photo ops. The “Queer Eye” guys were in D.C. advocating for the passage of The Equality Act, which would amend the Civil Rights Act of 1964 to prohibit discrimination based on gender identity and sexual orientation.

Because even though Van Ness can twirl his beautiful brown locks through the halls of Congress, the fact remains that in too many states he could legally be fired for being gay. Marriage equality may be the law of the land for now — You’d best believe that all of the right-wing judges Trump is getting rammed through are working hard to undo that — but legal discrimination is, too.

So it’s about time we right this wrong so that LGBTQ people can live their life with dignity and the protection they deserve.

Oh, but what’s that I hear? Somebody’s upset about the idea of LGBTQ people being protected from discrimination? Yes, yes. You, sir, in the back. What’s your name?

“Why my name is Bryan Fischer and as I wrote on the internet: ‘It’s not the Equality Act, it’s the Homosexual Supremacy Act.’”

Ugh. I should have known.

On April 7, Fischer, who is part of the American Family Association, wrote on the BarbWire website, “Don’t let the left and the Talking Snake Media (sic) lie to you. They lie to us all by the words they hope will drive and dominate the narrative. One of those words is ‘equality.’”

As Fischer pointed out, the left is just so darn tricky with their words since “equality” sounds like a good thing and makes people who are against it seem like bad people! It’s just not fair!

Exactly. A guy who believes that LGBTQ people are not human and are thus incapable of feeling love or contributing anything positive in the world just can’t get a break these days!

“But the reality is that not all behaviors are equal in moral value and should not be treated the same,” he continued. “The behavior of a man engaged in the act of sodomy with a homosexual partner is not morally equivalent to the behavior of a man who is engaged in loving and conjugal union with the wife of his youth. It is moral blindness and even stupidity to pretend otherwise.”

Well, color me morally blind and stupid then.

What confuses me most about what Fischer is saying here is the use of the word “youth.” What is he saying? That only young people can get it? Can’t the olds get down? Right-wingers are so confusing.

“There is no equality in this bill for anyone who believes that homosexuality is non-normative sexual behavior and something that should not be promoted, subsidized and celebrated, especially in our schools,” Fischer wrote.

Subsidized? Is there an LGBTQ tax break I’m missing here? Oh, wait. I think he means that he’s opposed to taxpayer money being used to enforce laws that protect LGBTQ people. Damn, he almost had me supporting the Trump tax cut (just kidding. I would never).

Also, boo-hoo, dude. You can think LGBTQ people are gross or immoral or whatever you want. But you don’t get to demand that your feelings trump another person’s humanity.

“I call this bill ‘The Homosexual Supremacy Act,’ since it elevates homosexuality and gender confusion above anything and everything else in the moral universe,” Fischer wrote. “Everyone will be required to bow the knee before the Baal of Sodom or face punishment.”

Oh, please. Accusing supporters of the Equality Act of being “Homosexual Supremacists” is ugly and an especially ignorant thing to say at a time when white supremacy, an actual problem that does real, measurable harm to more than just feelings, is on the rise and supported by the White House.

“The reality is that in any circumstance covered by this bill, somebody is going to be discriminated against, either a Christian vendor or a member of the LGBT community,” Fischer wrote.

Right now in many places in the United States, a lesbian can be fired for marrying her wife. Fischer is crying about the thought police when LGBTQ people have had every aspect of their lives policed. So as far as I’m concerned, Fischer can point at two women and their children and say, “Your family isn’t real,” but he doesn’t have a right to have his hatred enforced by policy.