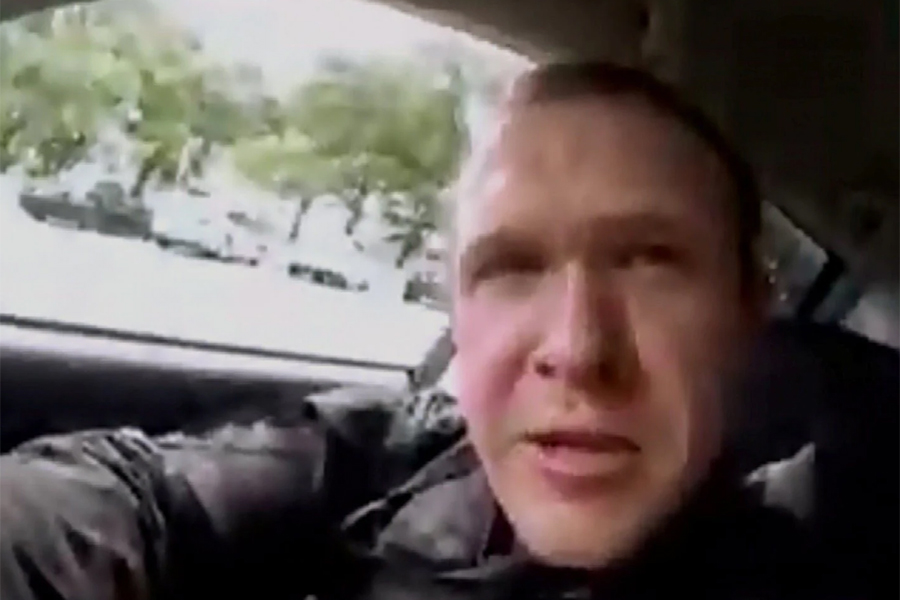 “Let’s get this party started.” That’s how Brenton Harrison Tarrant kicked off his live-stream video of his massacre at the first of two mosques in Christchurch, New Zealand.

I want to say this: “It goes without saying that Tarrant is a vile person deserving of universal condemnation.” But I can’t. Because, in this world of ours, it sadly does not go without saying. There are plenty of people praising Tarrant and admiring his actions.

And wouldn’t you know it, if you made a Venn diagram of people who have contributed to the anti-Muslim hatred that enabled this attack and people I’ve called out as creeps in this very column over the years, well, there’d be overlap, to say the least.

First and foremost is Donald Trump, a man who stoked and encouraged racists his entire career and capitalized on his white-supremacy cred while running for president.

And wouldn’t you know it, Tarrant, in a manifesto he published online before his murder spree, praised Trump as “a symbol of renewed white identity and common purpose.”

“My warmest sympathy and best wishes goes out to the people of New Zealand after the horrible massacre in the mosques,” Trump tweeted.

First of all, “best wishes?” Does he think he’s signing a birthday card?

Secondly, on the very same day Trump best-wished New Zealand, he issued his first veto against a bipartisan resolution against his make-believe crisis declaration to claw money for his border wall. And during the veto “ceremony,” Trump used the same language as Tarrant, calling immigration “an invasion.”

“Congress’s vote to deny the crisis on the southern border is a vote against reality,” Trump said. “People hate the word ‘invasion,’ but that’s what it is. It’s an invasion of drugs, criminals, & people … in some cases, they are killers.”

The only crisis at our southern border is one of the Trump administration’s own making and it is a humanitarian crisis. There’s no large-scale invasion. Those who are seeking to enter the United States are, by and large, people seeking refugee status as they flee from violence and poverty. Lots of them are women and kids.

So, did he call the New Zealand mosque shootings a terrorist attack? No. Despite the growing threat of white supremacist-fueled terrorism in the United States and internationally, Trump said, “I think it’s a small group of people that have very, very serious problems.”

Serious problems, yes. But no matter what the size of the group (and it is undoubtedly larger than Trump is willing to acknowledge), Trump’s anti-immigrant and anti-Muslim rhetoric have emboldened the people who hold these views and are most prone to violence.

Other folks called out as creeps in this column who have really shitty takes on the New Zealand massacre include: Dave Daubenmire, who used the word “fantastic” to refer to Tarrant’s video, said, “Please pay zero attention to the mosque shooting.” Because according to him, way more Christians are killed by Muslims than the other way around. So the news media trying to get us to pay attention to these Muslims is “the old bait-and-switch.”

Jesse Lee Peterson who said on his radio show, “In this country, the Muslims are treated better than the Christians and white people in America. We just saw where they allowed two Muslims to become congressmen in our government, and that is not good. Those two women hate Israel and they hate America.” Note: the two women he’s referring to do not hate America or Israel, though they have raised some very uncomfortable questions (albeit sometimes in clumsy ways).

Matt Barber, who tweeted, “Praying for #NewZealand & the families of the innocents murdered by evil, cold-blooded monsters.” And yet, Barber has a long and well-documented history of anti-Muslim rhetoric. He’s claimed that there’s no such thing as a “moderate Muslim” and that all Muslims want to murder Americans. He also wrote this line of hot trash: “Islam is the ‘religion of peace’ in the same way that rape is snuggling.”

Bryan Fischer, who took to his radio program to say that while he doesn’t condone shooting people, he said, “I hate Islam,” and agreed with Tarrant that “Islam is something that does need to be stopped.”

The list goes on. What these folks all have in common is hate. Against Muslims, against LGBTQ people, against anyone who doesn’t fit into their worldview. When hate goes unchecked it explodes. White supremacy is a cancer. The longer we ignore it, the harder it is to cure. Ignore it too long and it’s terminal.