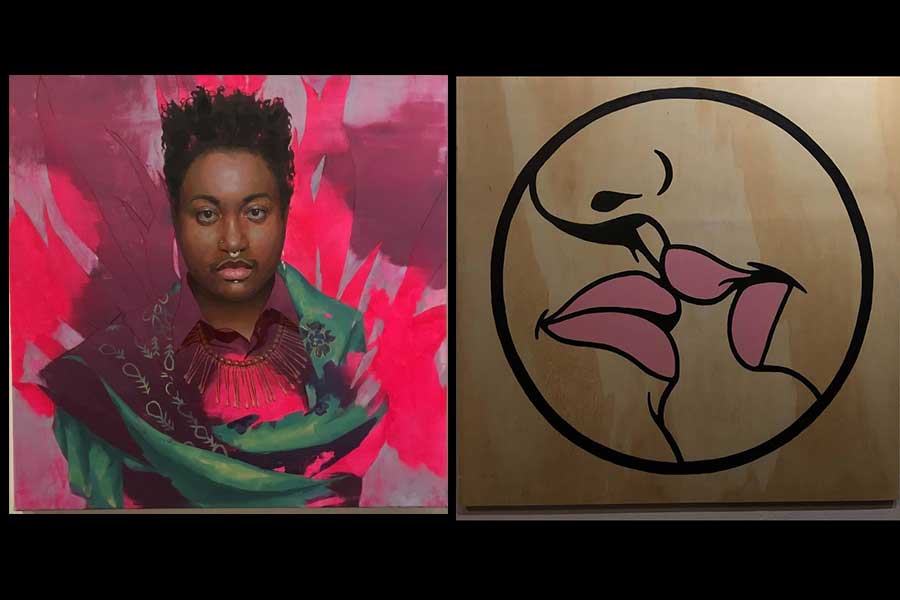 One of the major missions of William Way LGBT Community Center is to provide a forum for queer voices that might not otherwise be heard. These voices could be political, social or artistic.

As part of that mission, William Way regularly hosts art exhibitions by talented, often up-and-coming community artists. Some of these exhibitions are themed, but many are simply group shows that showcase work by members of the community.

William Way’s current exhibition, “4 Queer Voices,” which opened last week, is a group show featuring work by Marisa Velazquez-Rivas, Santiago Galeas, Ryan Psota and Marcus Branch. These artists were chosen because of the compelling images they present that celebrate their ideas about identity and community. Their styles and voices are unique, diverse and instantly distinguishable from each other.

Of the four, Branch is the most focused on photography. Thus, his offerings are the most journalistic in effect, offering an interesting mix of intimacy and objective distance. He chose a wide range of subjects, including mixed-race couples, trans people and nudes that prove you don’t have to have a gym body to be visually arresting.

Psota’s work is possibly the most unusual of the group. His style can best be described as folk art, expressive, deceptively simple, often with an obvious agenda. Careful study brings forth hidden depths and complexities.

Perhaps the most stylish work comes from Velazquez-Rivas. Most of her pieces are acrylic on wood, sometimes giving the appearance of antique woodcut illustration, except the style of the illustration is quite modern, in a 1960s-retro sort of way. She presents classic feminine iconographic imagery in a style that would not be out of place in a mid-’60s Playboy magazine, but with a 21st-century feminist edge that gives each piece an amusing bite. Her pieces are elegantly simple but quite sophisticated.

Perhaps most impressive, however, are the large oil-on-canvas portraits by Galeas. His mastery of formal technique is highly accomplished, as is his mastery of form and color. As a portraitist, Galeas’ style is within the boundaries of realism, yet the subtle nuances of his brushwork elevate his pieces beyond mere pretty pictures into the realm of evocative dream-pieces.

“4 Queer Voices” is on display through April 26 at William Way LGBT Community Center, 1315 Spruce St. The show is free to the public. For more information, visit waygay.org.