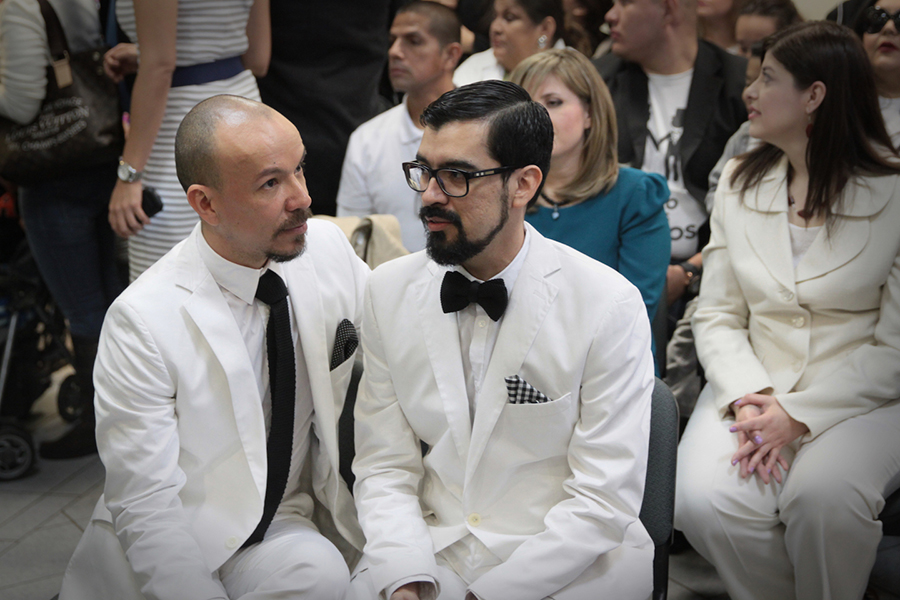 Engaged to be married? Need a little inspiration or relief from the wedding stress? These five films — four of which feature same-sex wedding ceremonies, and one about the importance of equal rights — might be just the thing for romantics to watch in preparation for the big day. The films depict the joys and jitters couples face when they decide to tie the knot.

Given the long fight for marriage equality, one of the best films about gay marriage is “No Dress Code Required.” This extremely moving documentary chronicles Victor Manuel Aguirre and Fernando Urias, a couple who encountered hitch after hitch when they wanted to get hitched in Baja California, Mexico. While same-sex marriage was legal in some states in Mexico, in Mexicali, where Aguirre and Urias live, the local government prevented gay weddings. Even after a lawyer filed an appeal of unconstitutionality, demanding equality, Victor and Fernando had to endure a lengthy battle — and even a bomb threat at the courthouse on one of their planned wedding days. As such, the couple became unlikely activists, determined to exercise their rights. It is a gripping story. It is also impossible not to cry happy tears at their wedding.

For something lighter, “BearCity 2: The Proposal” is a charming farce that opens with Roger (Gerald McCullouch) proposing to his 23-year-old twink boyfriend, Tyler (Joe Conti). While Tyler, says yes, he also has some trepidation about getting married. The couple, along with friends Fred (Brian Keane) and Brent (Stephen Guarino), head off to Provincetown where the wedding will take place. (It’s Bear Week!) The guys engage in a naughty whale-watching trip and go to a foam party that devolves into a slapstick fight. But it is the sensitive moments about Roger and Tyler’s wedding jitters, or the relationship issues that develop between Fred and Brent, that provide this broad comedy with its big heart.

“Do You Take This Man” is writer/director Jonathan Tunick’s absorbing chamber drama about the impending nuptials between Daniel (Anthony Rapp) and Christopher (Jonathan Bennett). As the guys prepare their rehearsal dinner the night before their wedding, the couple has an awkward fight and trust issues in the relationship are questioned. Perceived secrets and lies threaten to tear them apart. However, the film is quite touching as its ensemble cast espouses views about love, marriage and the communication involved in making relationships work. “Do You Take This Man” is a bit talky and stagy, but a scene where Daniel tells his best friend Jacob (Mackenzie Astin) about the gift he bought for Christopher is especially romantic and lovely.

“Love is Strange” is Ira Sach’s thoughtful and wistful film about a couple, George (Alfred Molina) and Ben (John Lithgow), who have been together 39 years. They marry in the opening scene, but after — and because of — the wedding, George is fired from his job at a Catholic school. This causes them to lose their apartment, forcing George to move in with their downstairs neighbors (Cheyenne Jackson and Manny Perez), while Ben moves in with his nephew’s family. But living apart makes their time together special; audiences will feel their longing. This is an incredibly affecting film, buoyed by the lead actors’ strong performances.

And although it is not a film about marriage, “Freeheld,” based on the true story (and Oscar-winning short documentary), shows the importance of rights for same-sex couples. Laurel Hester (Julianne Moore) is a dedicated detective in Seaside Heights, N.J., who must fight for justice when her legal domestic partner, Stacie (Ellen Page), is denied pension benefits after Laurel developed terminal cancer. Although civil unions were legal in the state at the time, the Freeholders of Ocean County had the power to determine the pension benefits for state employees in same-sex domestic partnerships; they refused to grant Laurel’s pension benefits to Stacie. The film, written by Ron Nyswaner (“Philadelphia”), chronicles how Laurel and Stacie reluctantly but emphatically challenge this decision. They enlist the help of Steven Goldstein (Steve Carell), a Garden State Equality activist. It may not be a surprise how the story turns out, but “Freeheld” makes a strong case for why equal treatment under the law is romantic.