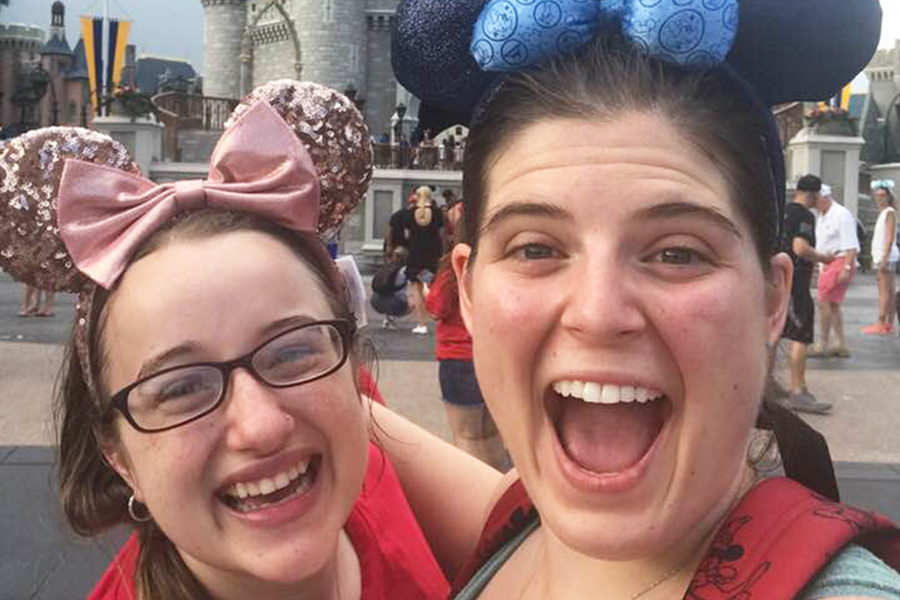 Alyssa Cosentino recalled meeting her future wife while the two of them were grad students at the University of Pennsylvania in August 2017.
“Personally, I thought she didn’t like me because she was very shy but …” Cosentino began.
“I liked her right away,” Julia Tich, her fiancee, interjected.

Cosentino, 27, led a volunteer group where Tich, 23, was a member. During meal time at a volunteer day, the two were across from each other scooping chicken onto their plates. Tich, who has food allergies, initiated the first conversation by asking Cosentino to check the food and ensure she would be safe.
“I wanted to make sure I did a good job,” Cosentino joked.

A few weeks later, Cosentino had tickets to see a show at FringeArts and asked Tich to accompany her. The two have been dating ever since, and plan to marry on Sept. 12, 2020.
The couple decided to buy engagement rings together and propose to each other within the same time-span. On Sept. 22, Tich proposed to Cosentino at a picnic in Valley Forge, where the two had one of their first dates. Tich presented a scrapbook of photos from their year as a couple.

Then about an hour later, they went to the Philadelphia Museum of Art. Cosentino gathered family together and received help from a Disney a capella group for her own proposal. The group sang “Lava” from the Disney short film of the same name. In the song, a volcano sings a song about wanting a mate of his own and a smaller volcano below sea level ends up falling in love with him from afar. The story ends with the two volcanoes forming an island and living happily ever after.

“I feel like I’ve always been hoping and praying that I would find someone that I love, and wondering if there was someone like me out there,” Cosentino said about the song’s parallels to her relationship with Tich. “And I found her, and I can’t believe I did.”

“It’s my favorite day ever,” Tich added about the proposal.

When it comes to what the two like about each other, Cosentino said Tich is “the purest soul out of anyone I’ve ever met” and noted her fiancee’s passion for social-justice issues. Additionally, she noted that Tich complements her.

“She can do things that I can’t do. I’m a kind-of all-over-the-place type of person and follow through is a difficult thing for me, but Julia is the type of person who will create an event for students and follow through with the whole thing and also do different partnerships with organizations where she’s working now,” Cosentino said of Tich’s leadership skills. “I just find that amazing because I’m not good at that, myself.”

“Besides that, I love how humorous you are and I think you’re beautiful,” Cosentino said to Tich. “You have a beautiful mind, body and soul. I love to be around you and I feel comfortable. I remember on our first date when we were eating together, we were sitting for three hours and I can’t sit with anyone for three hours. I’m always wondering when I’m going to head out and leave and I just felt safe and comfortable.”

Tich said she knew she was enamored by her future wife’s involvement in student clubs at UPenn.

“I just thought it was the coolest thing that [she] had a spirit and maintained it through many years,” Tich said. “I think she’s just the best person I’ve ever met. She’s so kind. She’s really funny. She has that combination of being an amazing person, but also being really genuine and being very funny. I think together we’re perfect for each other.”

“I couldn’t imagine being with anyone else,” Cosentino added.

“Me neither,” Tich said.