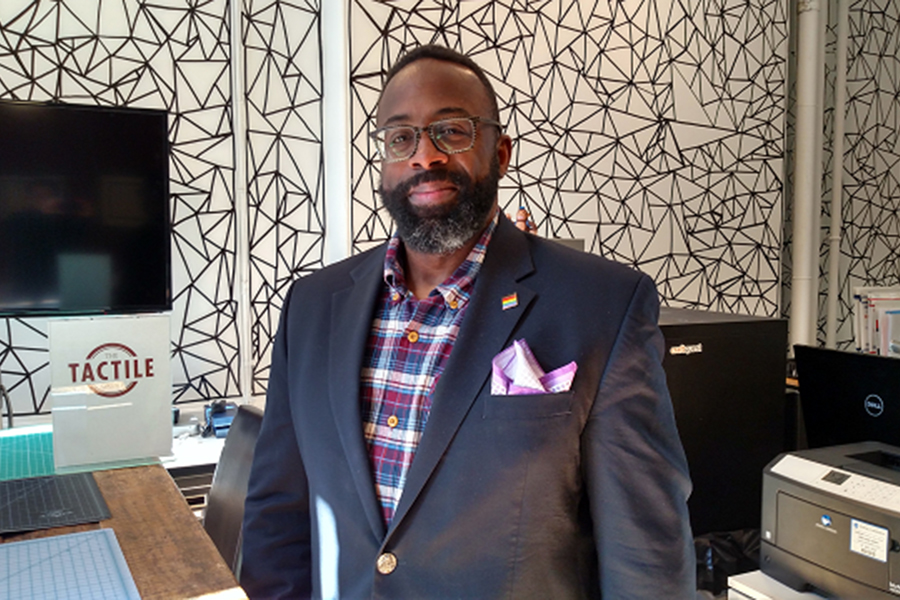 Marc Coleman is a Philadelphia success story by any means. He grew up in North Philadelphia and went to high school in Willingboro, N.J. From there, it was on to Princeton and Temple universities.

Today, his digital agency The Tactile Group has 20 employees and he hopes to hire five more by the end of this year. And since he’s outgrowing his brightly-colored Gayborhood office, he plans to get a space that’s twice the size.

Coleman’s positive results come from a lot of hard work. He spent 70 hours a week on business-related matters until hiring an office coordinator a few months ago, and is now down to about 55.

But The Chamber of Commerce for Greater Philadelphia also played a role through its CEO Access program. It’s a free mentoring partnership that pairs some of the region’s top executives with rising entrepreneurs from LGBTQ, minority, disabled and woman-owned companies.

Small Partners and Large Partners – as they’re known – share advice and counsel, as well as networking and business development opportunities. Since both lead their businesses, the Large Partners aren’t considered mentors.

According to Shawnna Williams, Coordinator of Member Engagement and Diversity and Inclusion at the Chamber, “They are to be seen as peers throughout the duration of their partnership.”

On paper, the pairings are expected to last a year, with the hope of driving economic competitiveness and highlighting diverse employee populations, but they can go on forever.

A new group of pairings will start in the fall, but don’t let the requirements scare you off. Small Partners must meet the demographics; have an existing for-profit business with at least three-year sales history; demonstrate at least $500,000 in annual sales and an increase from the prior year; and provide goods, services, technology, capital or resources to create jobs, wealth, and a predictable rate of return to investors and owners.

Williams said of the prerequisites, “We have found that the CEO Access model provides the greatest value to companies that, while possibly newer, have achieved some key basic business milestones.”

Those Small Partners are paired with volunteer Large Partners, who are business leaders from prominent and large businesses, and whose companies, names and reputations are pretty famous.

In fact, Comcast’s David Cohen came up with CEO Access when he was Chamber board chair in 2010. Since then, it has made almost 100 matches across a variety of industries.

Coleman was matched with the president and CEO of the Kimmel Center, Anne Ewers. Ironically, Coleman’s husband Ron had a friend in common with Ewers and the two met socially, but never discussed business.

After the pairing, they got together quarterly for an hour each session. Once, Coleman mentioned a human resources issue he was having.

“I described to her what was going on and she was like, ‘Oh, you need to fire the person immediately,’ so those kinds of pieces of advice probably saved me $10,000 in legal fees.”

Also, a raw deal had Coleman learning to make much better subcontractor agreements.

“‘Have a mentor, be a mentor’ has been my mantra for years and Marc Coleman is the epitome of why,” Ewers explained. “During our time together, he asked terrific questions, followed through on recommendations and taught me a great deal in the meantime – a win-win for both of us.”

Ewers also “opened her Rolodex” – as Coleman put it – and connected him with others who could help him grow his business.

He started disc jockeying and in the record industry after college, but realized he didn’t want to carry records for his whole life.

After college, he used a three-unit apartment building as a B&B before there was Airbnb, but that ended when the relationship with his partner ended.

Coleman, as a DJ, had been doing graphic design for print, but realized that wasn’t the future, so he taught himself HTML and CSS, and started his business from his bedroom in 2004.

Much more recently, his company helped Philadelphia pitch itself to Amazon as a potential HQ2 at https://public.philadelphiadelivers.com/.

Now, his main clients are large multiyear engagements along with some charities.

“We have a very diverse workforce. Here, we have folks from different generations, immigrants and native-born, people of color, white folks, members of the LGBT community … and with all these different perspectives, we’re not all approaching a problem from the same kind of direction.”

And what about readers looking to start businesses or have new ones?

Williams responded that next month – April – will be Small Business Month, and besides CEO Access, “There are many other great programs out there specifically designed to help smaller, start-up businesses.”

Learn more about The CEO Access Network at www.ChamberPHL.com/CEOAccess; about Small Business Month in April at chmbr.biz/smallbiz; and Marc Coleman’s business, The Tactile Group, at https://www.thetactilegroup.com/.