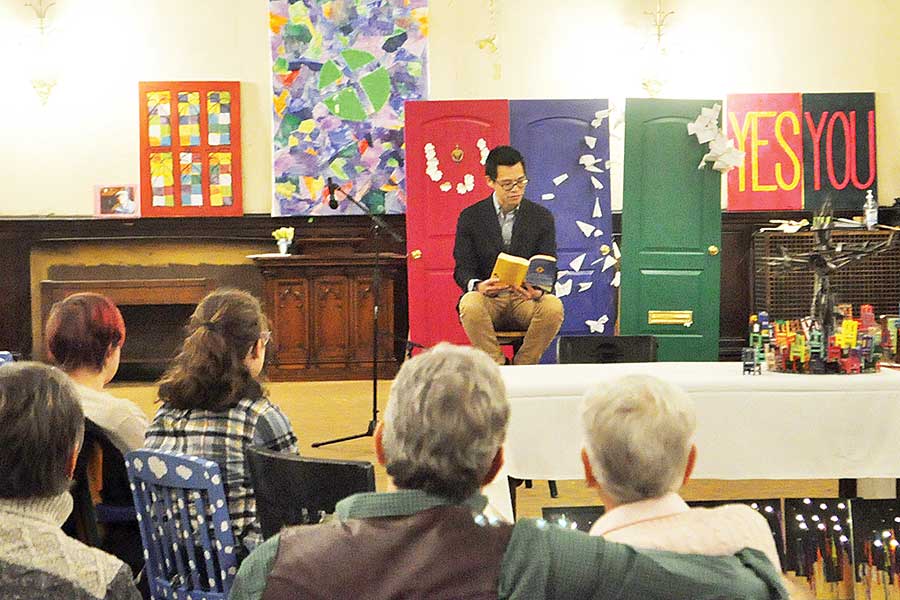 Religion and queerness haven’t really been best of friends. Heck, they don’t even get along most of the time.

But on Feb. 24, author Jeff Chu told the congregation at Broad Street Ministry, 315 S. Broad St., he wrote the book “Does Jesus Really Love Me? A Gay Christian’s Pilgrimage in Search of God in America” after he traveled across the country on a spiritual journey and met members of other denominations.

“My hope is especially for LGBTQ readers that as they read it, they would find something of their own stories in there, that they would find some message of hope and some sense there is a place for them,” Chu, as guest preacher, said. “They don’t have to be excluded, and they are loved.”

Chu was raised as a Southern Baptist. His grandfather was a Baptist preacher, among numerous other religious leaders in his family. Now, he’s a seminarian at Princeton Theological Seminary.

The idea for the book came when he was thinking about how Christianity started with the belief Jesus Christ is the Son of God and savior of all people, but how many practices have changed since then.

Chu’s route took many turns. He was born and raised outside San Francisco and went o high school near Miami. He went to college at Princeton and grad school at the London School of Economics, then wrote for Time magazine for seven years, first in London and then New York.

He came out in his mid-20s, between London and New York, and now has a husband named Tristan.

At BSM, Chu’s presentation was introduced with a pastor quoting Jesus to his disciples in Luke 6:20: “Blessed are you who are poor, for yours is the kingdom of God.”

“They needed healing, hope,” Chu said of the disciples, comparing them to those who today are distressed by the government and inequality, adding it’s the reason people go to church.

Chu interpreted it to mean though the poor may be happy they’ll be in charge and the wealthy will finally suffer, Jesus said, “Bless them, pray for them and love them.”

Therefore, Chu told congregants, you’re “unquestionably loved by the only one who matters” and Broad Street is a community that reminds you you’re loved.

“I’m often my own worst enemy and I focus on loving this enemy,” Chu admitted.

One turning point for Chu was visiting the Westboro Baptist Church in Topeka, Kan. – a congregation notorious for protesting military funerals and carrying signs declaring “God hates fags.” He wanted to visit to find out who these people were.

Chu got permission to tag along as Westboro protesters stood outside another church. He said he realized that shouting back at the protesters would only play into their hands. In that moment, he realized that showing love by, say, handing a sweaty protester a bottle of water, engaging with love rather than hostility, put them in what he called “productive discomfort.”

One protester said his group stands by its convictions and that since so much of the world will be going to Hell, and definitely LGBTQ people, they have no choice but to try to save people.

Chu said that Americans want to love, but don’t know how and that members of the clergy don’t always help. He looked into several denominations and decided to join the Reformed Church of America.

“I can’t claim to be fully informed,” he said. “I’ve changed for the better and know how much I have to learn.”

He said the book, published in 2013 and available in bookstores and on Amazon, is not one that specifically mentions all members of the LGBTQ community. Just a few years ago, he didn’t mention transgender people, there’s a little about bisexuals, and he didn’t know about the queer community.

Che Simmons, a member of BSM’s LGBTQ Fellowship, said he got a lot out of the lecture.

“I really enjoyed the message about loving folks who are hated, who you may want to hate. You know finding a way to love the people who you want to hate for whatever reason, and I feel like that’s something I’m going to try to take on as a challenge for myself,” Simmons said.

“I think a lot of us who grew up somewhere on the on the queer spectrum have a lot of questions about spirituality,” said Chu, also a journalist. “We don’t fit into the church as we were brought up in it, or the synagogue or mosque or whatever your place of worship may be and so we have to take a little extra detour in trying to figure out who we are and who we are trying to be.”

The service started with directions to the bathrooms and instructions to use the one you find more comfortable. Staff members at Broad Street Ministry wear tags with their names but also pronouns.

Broad Street’s head pastor Rev. Laura Colee, who also attended Princeton Theological Seminary, told PGN, “We’re a block from the Gayborhood and this has always been a community that has been both welcoming but also wanted to celebrate the fullness of people. We want to make sure this is space where everyone feels welcome, but we also recognize there are people in the LGBT community who are made to be leaders, as some of our interns are, as some of our pastors have been, so that’s a big part of who we are.”