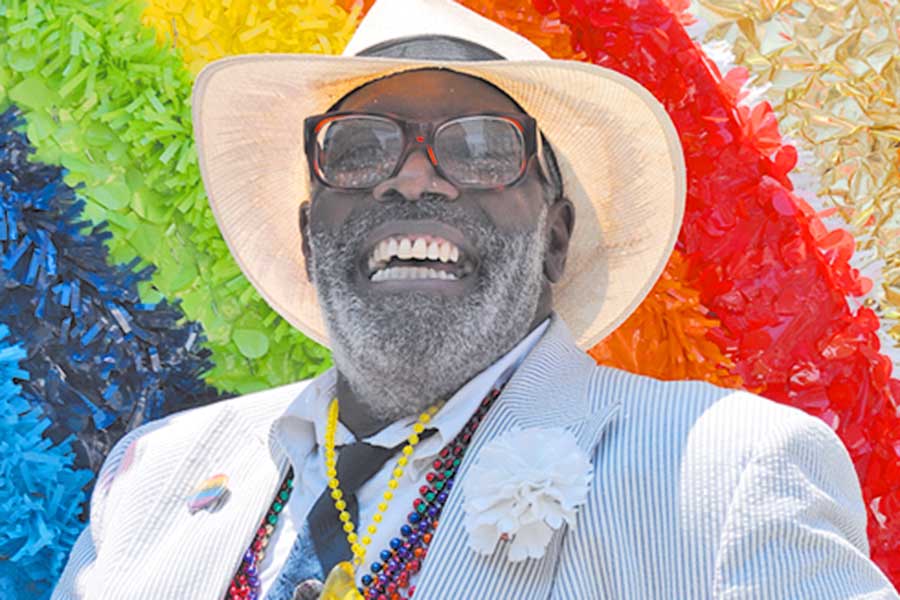 Few people can simply be famous for being famous, by their wholeheartedness and friendliness. Donald Carter was one of those rare people.

He was found dead Feb. 25 in his West Philadelphia apartment. Early reports indicate he had suffered a massive heart attack. Carter was 69.

“I have a very warm spot in my heart for Donald, who always showed up at every community event in his suit, tie and scarf,” Bartlett said.

“He also was a font of knowledge about community history, and shared with me his personal file of obituaries when I was creating the Gay History Wiki.”

How popular was Carter?

“Not only was Donald a cheerleader, but he was the pep rally,” said Philly Pride Presents executive director Franny Price. She added that he had the loudest laugh and the biggest smile.

Mark Segal, Philadelphia Gay News publisher, said he last saw Carter at the opening of the Cuban exhibit at WWCC just a few weeks ago, “and as always he greeted me with a hug. I will miss his hugs and warm, cheerful spirit, and this leaves me so very sad. He was a major supporter of the John C. Anderson Senior Apartments and one who would always bring a smile to your face when he entered a room. RIP, my dear friend.”

Segal, who was instrumental in establishing the JCAA, credited Carter with being a model spokesperson for the complex.

“While we were building the JCAA, he was one of our spokespersons and told from his personal experiences the issues facing LGBT elders. We could not have a better spokesperson!”

“For years going to photograph fundraising events, Donald would almost always be there. When out shooting bar photos, art-show openings or bar-hopping with my partner Micheal, we would often run into him and swap jokes. I will never forget his laugh,” Drake recalled. “His moniker was the ‘Mayor of the Gayborhood’ and he enjoyed life to its fullest when ‘most poor slobs were starving to death,’ as he would say. He was easily the nicest guy Micheal and I have ever met, and we will miss him dearly.”

“Donald was a valued, longtime member of our board. He brought an important community perspective to our deliberations and he was always available to help out at events and programs, and we will miss him a lot.”

Carter was also the inspiration for Suzi Nash’s long-running PGN column, Family Portrait. While marking the column’s 10th anniversary in 2015, Nash wrote: “If you don’t know him by name, you’ve probably seen him about town. Donald is a dashing man with salt-and-pepper hair who is at just about every function in the city. He’s a black Republican, which he says is because someone has to do it. He’s so much fun and so reasonable that I don’t hold it against him.”

At a 2005 LGBTQ event, Nash recounted she was embarrassed since she knew Carter for about 12 years but wasn’t able to answer the simple question, “What does he do?”

So, in her 2005 profile, she wrote: “Donald is a Philadelphian through and through. He is the proud product of the Philadelphia school system. He went to Masterman during its first year of accelerated programs, then to Central and then onto Temple. He got his master’s in ancient Roman history at the University of Cincinnati, where he taught for several years. As an activist in Cincinnati, he lectured in small towns at small schools – rather impressive in 1970s Ohio.”

Carter told Nash, “I’ve been honored by the Log Cabin Republicans, but I think being a citizen panelist on Bill Maher’s ‘Politically Incorrect’ would be considered my biggest reward. It gave me a national platform to say I’m gay and to represent Philadelphia.”

(He was also once a “Jeopardy!” contestant.)

When asked what he did for a living, Carter answered, “The generic answer would be community activist, which means I’m active in the community. I’ve been a 15-year volunteer with Action AIDS [now Action Wellness] and am on the board of the Jonathan Lax Clinic [part of Philadelphia FIGHT]. I’m also the founder and a board member of the Log Cabin Republicans in Philadelphia.”

But he told her his best job description was “Be there. Do that.”

Bartlett and Price are planning a tribute and memorial at WWCC on Saturday, March 16 at 1 p.m.