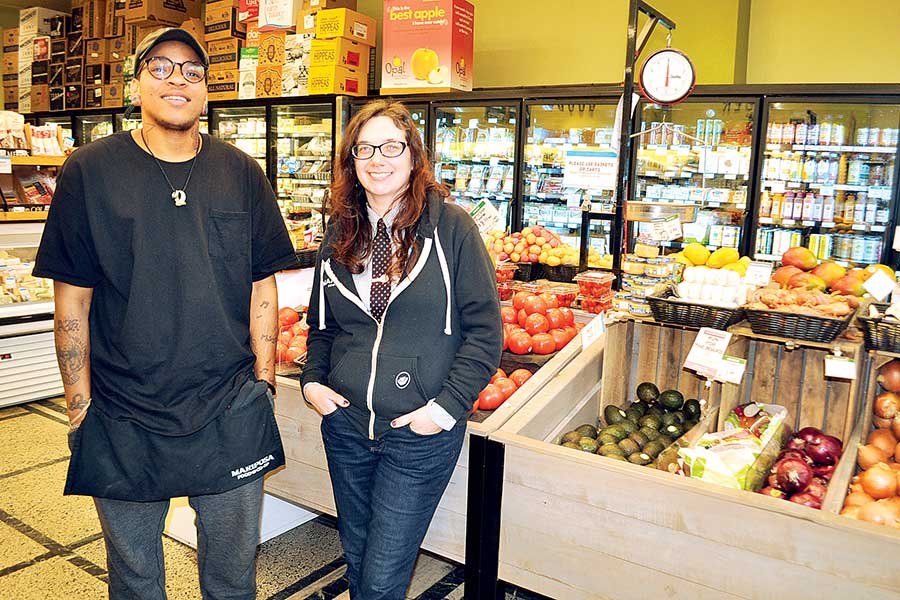 Founded on antidiscrimination ideals, cooperatives have a storied history as LGBTQ havens.

“It’s pretty ingrained in the culture. [Co-ops] have been known as safe spaces for queer folks since probably the ’70s,” said Aj Hess, who’s worked in cooperatives since the early aughts.

“When we talk about diversity, that’s an area where this co-op has done well for a long time. Having a large percentage of the staff outwardly identifying as queer makes the space more comfortable for people to shop here and attracts more staff who identify as queer,” Hess said.

Hayley Stormon, a West Philly transplant who identifies as genderqueer and bisexual, heard about the job and its benefits from a Mariposa alum.

“I think a large part of the draw was the queer-friendly aspect. It’s kind of daunting to look for a new job and wonder how you’re going to be perceived,” Stormon said.

“Basically my last job wasn’t too good with trans people,” Dalton said. “So when I heard that this one was super trans-friendly, I was like, this would probably be a perfect fit.”

But while Mariposa has proved to be an internally inclusive employer, critics have posited the co-op hasn’t done enough to welcome West Philadelphia’s established black and brown communities.

In a Facebook post last month, the Black and Brown Workers Cooperative called for a “Time’s Up” for Mariposa, citing the organization as a cause of the rapid gentrification of West Philadelphia’s Baltimore Avenue, where the co-op operates a storefront.

“Over the years this institution has actively participated in the cultural displacement of West and Southwest Philly’s black and brown communities,” stated the Jan. 17 post. “Mariposa Food Co-op is inaccessible to the most vulnerable community members.”

Dalton, a grocery stocker at Mariposa, who grew up and still lives blocks from the co-op, expressed similar sentiments to the BBWC.

“[Mariposa] wasn’t presented for us like it was for white people. They’re just like, This is an organic food store, of course, it’s for me. But for black people, we don’t assume organic foodstuff is for us.”

For its part, Mariposa acknowledges how it’s perceived by West Philadelphia’s black and brown communities. It’s something Hess hopes to see addressed with the election of a new co-op board next month.

For folks looking to become member-owners, there are subsidies.

The Mariposa Owner Fund allows new member-owners to join for half of the $200 sign-up cost, with nothing due for the first year. After their anniversary, owners can pay the remaining $100 due in $10 monthly installments.

“So that’s a way to make it a little bit more accessible. We’re trying not to have any financial barrier for folks to become owners of the cooperative,” said Hess.

There’s also Food For All, which offers 10-percent discounts to anyone receiving government assistance for food access, i.e., SNAP, WIC and SSI, etc.

Mariposa began the program in September as a pilot with a 100-person cap. It reached capacity within a month and a half.  Responding to community demand, the co-op has since extended its 2019 budget to allow for unlimited sign-ups and made literature on FFA available at check-out and through its newsletter which has 5,000-plus recipients.

“A lot of people still don’t know that Mariposa exists. The only reason I knew about this store is because my aunt lived down the street from it. But a bunch of people I know who’re black in the community, they don’t know where Mariposa is. That’s a problem.”

Dalton said he hopes that a refreshed board will bring greater accessibility and philanthropic output from the co-op.

“I want the store to actually be completely accessible to everybody in the community, every last single person,” he said. “I want them to know that this is your store because this is your city.

“And because we’re here taking up space, let’s give back. Let’s say thank you for letting us be here. Like actual hands-on communication with the community. That’s what I would really appreciate.”