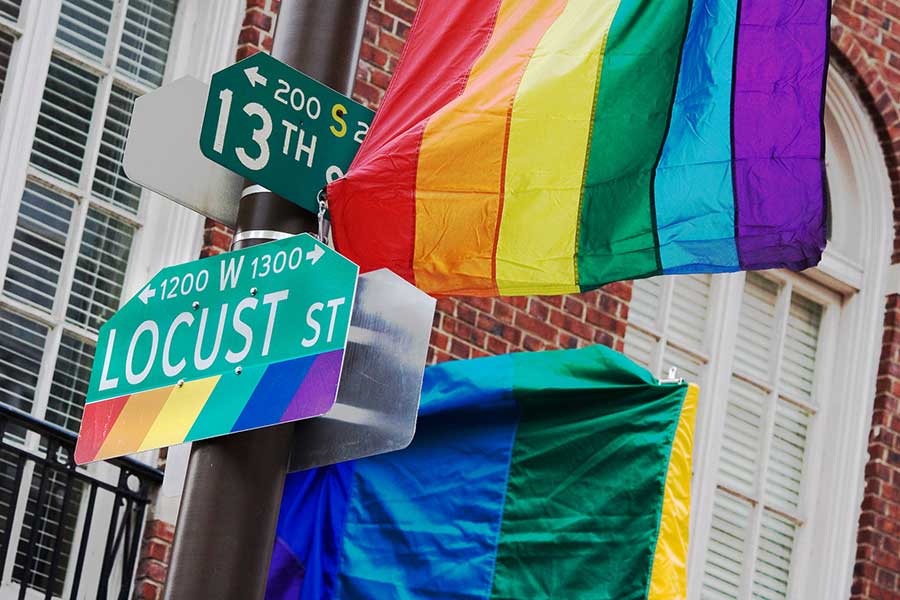 The police continue to investigate Sunday’s violent attack on a 50-year-old gay man outside the Toasted Walnut at 13th and Walnut Streets.

The investigation by the Philadelphia Police Department and the District Attorney’s office is ongoing, and officials say they will not be making any determinations until the inquiry is concluded.

The examination of the case has been complicated by the retraction of statements by an individual who claimed to have been an eyewitness to the events.

In an interview on Jan. 30, Josh Schonewolf, a bartender at the Toasted Walnut, told PGN he witnessed a gaybashing in front of the club on Jan. 27. Schonewolf had given an on-camera interview with a similar account to WPVI/6ABC the day before. At 10 p.m. on Jan. 31, Schonewolf contacted PGN to retract his account of the incident. He told PGN at that time, “I never went outside during the altercation.”

PGN also removed its initial online report, after Schonewolf contacted PGN to retract his story. The original story also appeared in the print version of the newspaper. 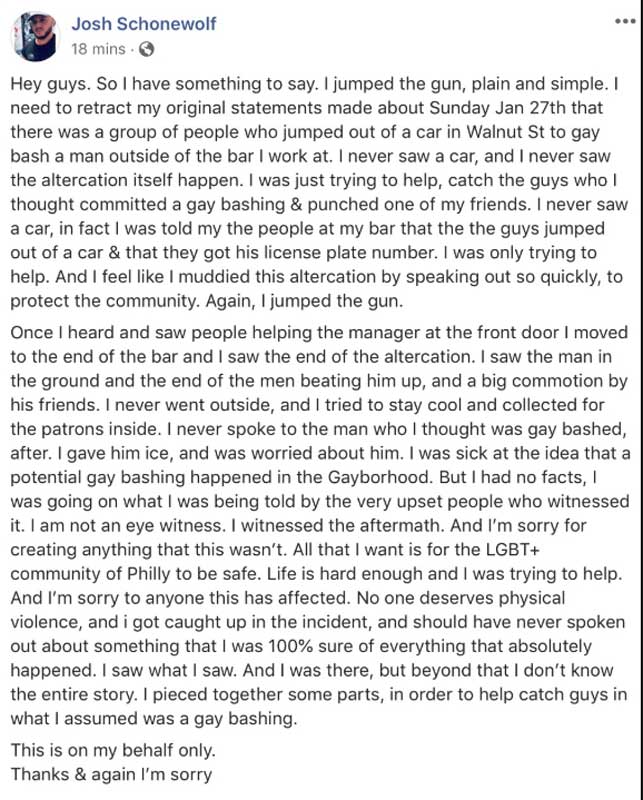 Schonewolf, who had originally posted his account of witnessing the assault to Facebook, put up a new post in which he said, “I jumped the gun, plain and simple … I never saw a car, and I never saw the altercation itself happen.”

Schonewolf says in the post that he only witnessed the end of the altercation from the bar, which looks out onto the street.

“I was just trying to help catch the guys who I thought committed a gay bashing & punched one of my friends.”

Sources close to the investigation affirmed to PGN on Feb. 1 that Schonewolf had not been outside the Toasted Walnut during the attack. As PGN reported originally, general manager Rocco DeFinis did go outside and attempted to break up the fight. He was struck during the melee. He declined medical attention, as reported and was not the subject of the attack, as has been rumored on social media.

The facts of the case remain murky. Security footage is being evaluated by both the PPD and the District Attorney’s office to determine what transpired and how best to address the incident.

Amber Hikes, executive director of the Mayor’s Office of LGBT Affairs, has been monitoring the investigation since it was first reported to the police. On Feb. 1, she issued the following statement to PGN: “Over the past few days our office has been working with police to get more details on the assault that happened Sunday night in the Gayborhood. After reviewing the evidence of the incident and speaking with the witnesses and complainant, Sunday evening’s incident does not appear to be a hate crime.

“The complainant and witnesses have confirmed that no homophobic slurs were uttered during the altercation and the assault was not motivated by bias or homophobia.”

The statement continued, “Initial accounts indicating that the complainant was randomly targeted and assaulted because of his sexuality are false. The police investigation of Sunday’s incident is ongoing.”

PGN also spoke with Toasted Walnut owner Denise Cohen on Feb. 1. Cohen, well known in the community for her various club operations, including Sisters, shared her concerns over the incident. She was upset that anyone had been injured in the Gayborhood, including her employee, DeFinis, who she clarified was not targeted, nor the subject of the attack, but was merely trying to help the victim in the incident.

Cohen declined to comment directly, saying only that “The police are investigating and we really want to leave it to them.”

Another source familiar with the investigation told PGN that the attack appeared to be random, but not a gaybashing and was not related to the Toasted Walnut.

PGN contacted the PPD again and were told there is “no update at this time.” The PPD still has not released the victim’s name.

The PPD Office of Media Affairs gave PGN the following statement about the assault: “On Sunday, Jan. 27, 2019 at approximately 10:52 p.m., police responded to the 1300 block of Walnut Street for a person screaming. A 50-year-old male victim was assaulted by four male defendants and one female defendant. The defendants fled in a vehicle prior to police arrival. The victim was transported to Jefferson University Hospital by medic unit for head injury and is listed in stable condition. This investigation is active and ongoing with Central Detectives Division. Offenders and vehicle make unknown at this time.”

Schonewolf declined to speak further with PGN, but said in his Facebook post that, “I’m sorry to anyone this has affected,” which would include PGN, to whom he gave a false account of the attack.

What remains true about Schonewolf’s initial interview with PGN is that violence against LGBTQ people has risen dramatically under the current administration, which has instituted many anti-gay and anti-trans policies. In November 2018, the FBI released new statistics showing victims targeted due to their sexual orientation or gender identity made up nearly 17 percent of all hate crime victims — an increase of more than 5 percent over the previous year.

This remains an evolving news story. Anyone with information about the incident is asked to contact the Sixth District at 215-686-3060.